Drought led to culling of Arkansas cattle herds in 2022 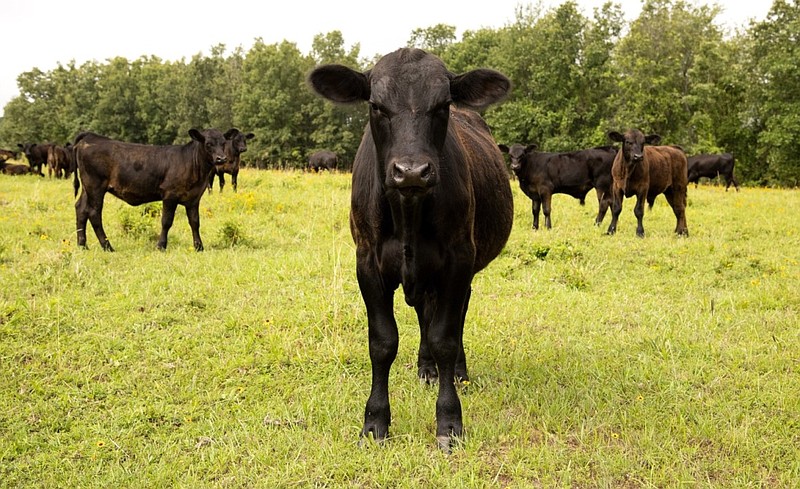 Spring calves graze in Johnson County in this 2020 file photo. Drought in 2022 reduced both pasture forage and hay production, leading many beef producers to reduce or liquidate their herds. (Special to The Commercial/University of Arkansas System Division of Agriculture, Fred Miller)

Drought was the biggest driver of livestock activity in 2022.

"The theme of 2022 was drought and all the implications that had for Arkansas beef producers," said James Mitchell, assistant professor and extension agricultural economist for the University of Arkansas System Division of Agriculture.

Beginning in June, with only a little break in August, drought hammered the beef-producing counties in the state, Mitchell said.

"Producers didn't have the grass, and it wasn't a good year for hay," Mitchell said. "They had to cull a lot of cows."

"It's a long period because of how long it takes from the time a calf hits the ground until it goes to market to become beef."

The current liquidation cycle started around 2019 when prices began to decline, Mitchell said. And then the drought hit cattle country hard. That began to drive prices up again, but herds are still being reduced because the extended drought is reducing availability of good pastures and hay.

"We're still seeing improvements in prices, but I doubt we'll have the grass for anything but declines," Mitchell said.

He expects a 4 percent decline in the size of the national beef cow herd when USDA releases the January Cattle Inventory report, he added.

Mitchell said it's important when talking about the cattle cycle to remember that there are real people behind the numbers.

"This drought is forcing Arkansas producers to greatly reduce their herds," Mitchell said. "In some cases, they are having to completely liquidate their cattle."

Mitchell said beef producers need to be planning for 2023.

"Prices will be high," he said. "They'll be at levels we haven't seen in five or six years."

But if the drought continues, herds may still have to be reduced.

"Talk to the people you do business with, and talk with your county extension agents about the tools and information they have that can help you prepare," he said.

Mitchell said the Division of Agriculture's Fryar Price Risk Management Center of Excellence is a good source of information, reports and decision-making tools that producers will find useful. The center was scheduled to publish its annual report of the state's agricultural Market Situation and Outlook in December.

Jiangchao Zhao, associate professor of animal science at the Arkansas Agricultural Experiment Station, found that microorganisms living in the respiratory system of cattle could be key to combating bovine respiratory disease, or BRD, the most costly illness affecting the beef industry.

BRD costs the beef industry as much as $2 billion per year, including animal death, reduction in feed efficiency and other ill effects, as well as for prevention and treatment costs. U.S. feedlots alone see up to $900 million in annual losses from BRD, according to an article, "Economic Effects of Bovine Respiratory Disease," published in the Journal of Animal Science (https://bit.ly/3SWJRLg).

Zhao uses next-generation sequencing to identify the microorganisms populating the bovine nasal cavities, known as the respiratory microbiome. He has correlated those results with the presence or absence of BRD in calves to discover which microbiota benefit the animal's health and which ones impair it.

Zhao's lab team has identified several potential probiotics based on big data analysis. Samantha Howe, a Ph.D. student in Zhao's lab, was able to culture some of the bacteria.

"She is working to verify the beneficial effects of these bugs to see if they can kill or inhibit the growth of pathogens," Zhao said.

In follow-up research, Zhao will feed those "good" bacteria back to the calves to see if they are able to stop or reverse a BRD infection.

This research could lead to the development of probiotic products that use the good bacteria as an intervention to cure or prevent BRD, Zhao said. Such products can be safer and more effective than antibiotics, to which bacteria can build resistance.

Brittni Littlejohn, assistant professor of animal science for the Agricultural Experiment Station, has shown that a common and inexpensive hormone additive may mitigate the ill effects on growth performance of calves born to cows grazed on endophyte-infected fescue pastures during gestation.

Fescue is the most common cool-season forage in the southeastern U.S., including Arkansas, Littlejohn said. Most of that fescue is infected with endophyte fungus, which is beneficial to the grass, but produces ergot alkaloids, organic compounds in plants that are toxic to grazing animals.

Calves born under these conditions are underweight, Littlejohn said. Calves in her study were on average about 90 pounds underweight at weaning. Low weight continues as the calves grow and the differences are maintained through yearling stage, she added.

"The calves are yearlings now," Littlejohn said, "and still showing benefits based on how you treat the mothers."

Animal scientists Beth Kegley and Jeremy Powell found that cattle grazing pastures with high soil-test phosphorus may be getting enough of the nutrient from the grass to eliminate the need for a phosphorus feed additive.

"Phosphorus is necessary for developing heifers," Kegley said. "It's important for all energy needs, metabolism, bone growth, fertility and other uses."

Powell said that in many areas of the state, especially in Northwest Arkansas, farms often have both beef cattle and poultry operations.

"There has been an increase in phosphorus concentrations in soils where livestock and poultry manure have been repeatedly applied to grazing pastures or hay meadows," Powell said. "Consequently, forages grown on soils high in phosphorus tend to contain high amounts of the mineral itself."

Kegley said mineral intake throughout the study did not differ between the animals that received phosphorus supplements and those that did not. Also, reproductive tract scores, measured by ultrasound twice during the study, did not vary significantly between the two groups. Pregnancy rates were similar for the control group that did not receive supplemental phosphorus at 79 percent versus 80 percent for the group that received the supplemental phosphorus.

"The reduction of cost of the mineral supplementation for this period was about $8.10 per head, potentially reducing the annual cost more than $1.29 million for the development of the Arkansas beef heifer replacement herd," Powell said.

Dirk Philipp, associate professor of animal science, said research has identified two types of grass that are well-suited for "silvopastures." Tall fescue and orchardgrass were found to grow well in wooded areas and provide resilient forage for cattle.

Daniel Rivera, director of the Southwest Research and Extension Center near Hope, said research shows that pasture-weaned calves put weight back on faster than those moved to a dry lot. Results from the first year of a three-year study showed calves regained more weight in the first 21 days of weaning in a pasture, with or without physical contact with their mothers.

Fred Miller is with the University of Arkansas System Division of Agriculture.

Print Headline: Drought led to culling of cattle herds in 2022