The nation in brief: Russian spy ship monitored off Hawaii 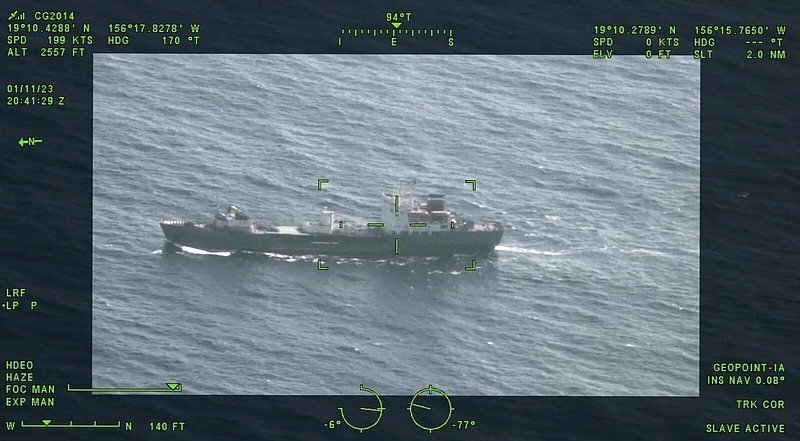 WASHINGTON -- A Russian spy ship has been patrolling off the coast of Hawaii but so far has remained in international waters, the Pentagon said Thursday.

While the appearance of a Russian surveillance ship along the U.S. coastline is not unusual, this one has attracted more attention because of heightened tensions between the U.S. and Russia over Moscow's invasion of Ukraine and veiled threats to employ nuclear weapons.

The Vishnya-class Kareliya surveillance ship has been monitored by the U.S. Coast Guard sailing near Hawaii over the past several weeks.

"I can't speak to why the Russians are sailing the ship right now, it's kind of precarious timing," said Pentagon spokeswoman Sabrina Singh. She said the Coast Guard is still monitoring the ship, which has been operating in international waters.

"We haven't seen any unsafe or unprofessional behavior and we expect that the Russians will operate within the region in accordance with international law," Singh said.

In a video posted to Twitter by the Coast Guard, the ship appears under tow by another ship or to be in a resupply mode.

"U.S. Indo-Pacific Command is monitoring the Russian vessels operating in international waters in the Western Pacific," the Pentagon said. "As Russia operates within the region, it is expected to do so in accordance with international law."

ALEXANDRIA, Va. -- A jury has convicted a Navy reservist from Virginia accused of storming the Capitol on Jan. 6, 2021, on separate charges that he illegally possessed silencers disguised to look like innocuous cleaning supplies.

The conviction Wednesday night against Hatchet Speed in U.S. District Court in Alexandria comes a month after a jury failed to reach a verdict in his first trial.

The new jury needed only a few hours of deliberation before convicting him on all three counts of unlawfully possessing unregistered silencers.

Speed's case is noteworthy not only because of his alleged participation in the riot with the far-right Proud Boys, but also because he espoused antisemitic views in undercover recordings and discussed strategies for eradicating the Jewish population in the U.S.

The case in Virginia hinged on three devices Speed bought in March 2021 that the government argued were unregistered silencers. Speed contended the devices are "solvent traps" to collect excess liquid that spills out when a gun is cleaned.

Prosecutors said although the company selling the devices marketed them as solvent traps, they are designed to be easily converted into silencers, which is why people spend more than $300 for them.

Speed was taken into custody after the verdict and awaits sentencing in April.

NORFOLK, Va. -- The family of a 6-year-old boy who shot and wounded his teacher in Virginia said Thursday that the gun he used had been "secured" and that one of his parents usually accompanied him in class but did not the week the shooting occurred.

The family's statement was released by an attorney and did not elaborate on where the 9mm handgun was kept. The family also was not identified.

"Our family has always been committed to responsible gun ownership and keeping firearms out of the reach of children," the statement said. "The firearm our son accessed was secured."

The family also said that the boy "suffers from an acute disability and was under a care plan at the school that included his mother or father attending school with him and accompanying him to class every day."

The family said the week of the shooting "was the first week when we were not in class with him. We will regret our absence on this day for the rest of our lives."

The statement is the first public communication from the child's family and comes nearly two weeks after the Jan. 6 shooting at Richneck Elementary.

Former President Donald Trump's campaign is asking Facebook's parent company to reinstate his access on the grounds that he's a declared 2024 presidential candidate and that keeping him off the platform is interfering with the political process.

"At a time when the United States faces critical issues that impact its citizens and the world, and at a time when the country begins the process of choosing its next president, we believe that Meta should be encouraging a full and robust dialogue, not silencing presidential candidates," the campaign said.

Trump lost access to his Facebook and Instagram accounts after the company deemed that some of his posts were encouraging his supporters to riot at the U.S. Capitol.

A Meta spokesman said the company will announce its decision this month.