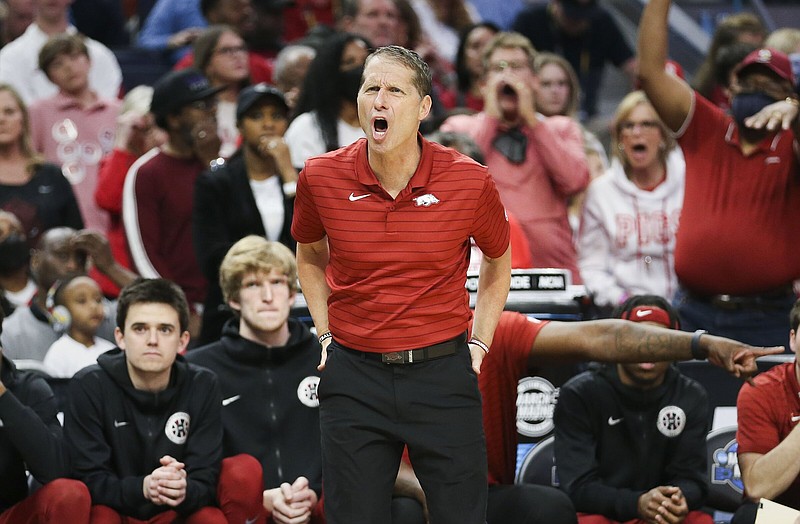 Coach Eric Mussleman and the Arkansas men’s basketball team will open SEC play at LSU on Dec. 28, with the SEC home opener against Missouri on Jan. 4. (NWA Democrat-Gazette/Charlie Kaijo)

FAYETTEVILLE -- After the University of Arkansas men's basketball team was called for 33 fouls in Wednesday night's 79-76 loss at Missouri and the Tigers had 23 fouls, Coach Eric Musselman declined to talk about how officiating impacted the game.

"I'm not going to comment on the officials," Musselman said in a postgame media Zoom conference. "It's our responsibility to send clips in [to the SEC office] that we think are worthy of doing.

"Look, Missouri beat us and that's what happened."

Turns out the SEC office had something to say about a critical call that cost the Razorbacks an opportunity to go ahead with less than a minute to play and helped the Tigers instead break a tie and take the lead for good.

The score was 71-71 when Arkansas guard Davonte Davis drove the lane and was called for a charging foul with 43.7 seconds left as he made contact with D'Moi Hodge.

It appeared Hodge had a foot in the restricted area under the basket and should have been called for a blocking foul, but after the officiating crew of Tony Greene, Owen Short and Brian Dorsey watched a replay and consulted with a review coordinator at the conference office in Birmingham, Ala., the charge call was upheld.

Then the SEC office released a statement Thursday that Hodge, not Davis, should have been called for a foul.

The statement said Hodge was in the restricted area under the basket and the play was reviewable in the last two minutes of the game.

"When the officials on-site went to review the play, the video replay center incorrectly communicated to them that the play was not reviewable," the SEC office statement said. "Therefore, the play stood as called on the floor."

Arkansas was in the double bonus, so if the foul had been called on Hodge, Davis would have gone to the free-throw line for two attempts.

Instead, Davis, a 79.4% free throw shooter (27 of 34) on the season who led the Razorbacks with 18 points Wednesday night, fouled out and Hodge hit two free throws to put Missouri ahead 73-71.

It was the last of 17 lead changes.

Black missed a desperation three-point attempt at the buzzer guarded by DeAndre Gholston.

It was the second consecutive game that the Razorbacks (12-6, 1-5) lost a 10-point lead in the second half.

Vanderbilt beat Arkansas 97-84 in Memorial Gymnasium in Nashville, Tenn., on Saturday after the Razorbacks led 50-40 with 17:37 left.

Arkansas has started 1-5 in SEC play for the first time since 2009, when the Razorbacks finished 2-14.

"We did a lot of stuff better than we've been doing," Black said. "At the end of the day, we have to win. You can say it's a step forward or whatever, but we didn't win."

Davis and Johnson were among four Razorbacks who fouled out along with senior forward Makhi Mitchell and freshman forward Jordan Walsh.

Walsh scored 12 points in 13 minutes before fouling out with 6:48 left. The Razorbacks were plus-13 when he was on the court.

"Based on his productivity, he would have played a lot more ... but he fouled out," Musselman said. "We're trying to continue to build his confidence, continue to tell him to take open shots.

"Him fouling out tonight was extremely crucial. ... Jordan is still figuring his way."

Missouri hit 30 of 40 free throws after Alabama and Vanderbilt each had 36 free throws against the Razorbacks in the previous two games.

"We haven't caught any breaks," Musselman said. "Every team's got to try to create the breaks for themselves."

Arkansas has been called for 86 fouls over the last three games.

"We've got to figure out how to defend without fouling. That's basically it," Black said. "Especially down the stretch when they're in the bonus. We've just got to be solid."

Arkansas hit 23 of 26 free throws, but based on the SEC office's statement, the Razorbacks should have had at least two more attempts against Missouri and the Tigers should have had two fewer.

"Not the WIN we wanted, but I appreciate the diligence and accountability from my colleagues in SEC office," Arkansas Athletic Director Hunter Yurachek posted on his Twitter account after the SEC office released its statement.

The SEC office ended its statement with an indication the game officials and in the command center in Birmingham are being held accountable.

"All on-court and replay officials are evaluated on an ongoing basis," the statement said. "Performance evaluations are used to determine game assignments, SEC Tournament and postseason tournament assignments.

"The SEC continues to evaluate, refine and improve the SEC officiating process."