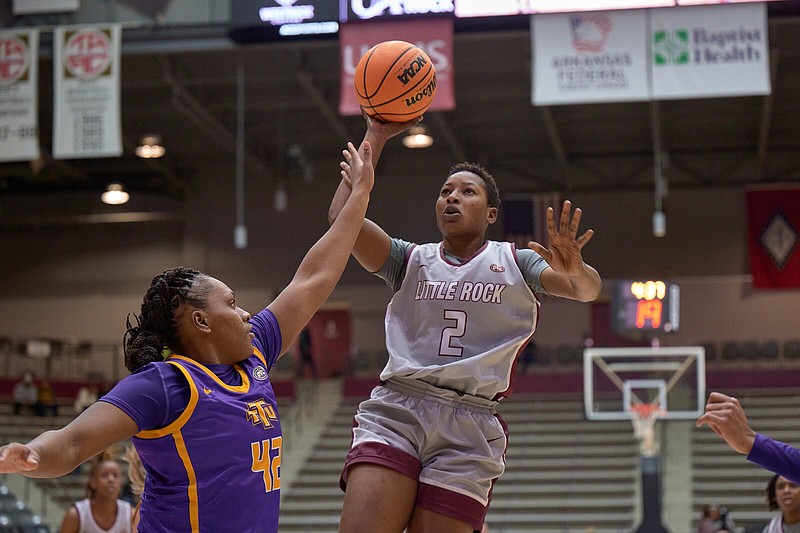 UALR forward Sali Kourouma puts up a shot Thursday while being defended by Tennessee Tech forward Kiera Hill during the Trojans’ 61-45 victory over the Golden Eagles at the Jack Stephens Center. Kourouma finished with a game-high 22 points. (UALR Athletics/Mark Wagner)

Tennessee Tech Coach Kim Rosamond wasn't waiting for an invitation from the officials to chat.

After a pair of no-calls went in favor of the University of Arkansas-Little Rock on one end and a defensive foul against her Golden Eagles on the other, Rosamond strode right over the midcourt line and into the middle of the floor before anyone could direct her back to the Tennessee Tech bench.

As much as she was bothered by the officiating, the Golden Eagles were perhaps more frustrated by their foes.

Thirteen straight points at the start of the third quarter put UALR in full control as the Trojans dominated both offensively and defensively in a 61-45 victory Thursday night at the Jack Stephens Center in Little Rock.

The Trojans stretched a 31-26 halftime advantage to 57-36 by the middle of the fourth quarter, limiting a Golden Eagle squad that entered the night averaging more than 72 points per game to 14-of-49 shooting.

"It always starts with our defense, and our defense was really very good because they're a good ballclub," UALR Coach Joe Foley said. "But our offense was pretty good tonight ... so overall, I thought it was probably our best complete game playing against a good team that we've had this year."

The Trojans had already scored four points in the quarter when Rosamond's outburst resulted in a technical foul. After Jayla Brooks hit her free throw to complete a three-point play that set Rosamond off, Nikki Metcalfe knocked down the two technical free throws and UALR (9-9, 6-1 Ohio Valley Conference) scored on its next three possessions to go ahead 44-26.

Tennessee Tech (11-6, 5-2) was plenty animated beyond just its coach -- the Golden Eagles' bench often rose to its feet, trying to will their teammates back into things.

It was just the opposite on the other side of the scorer's table. Following the mold of the typically stoic Foley, the Trojans remained poised as they kept Tennessee Tech at arm's length throughout the second.

"It was mainly us keeping our composure," guard Jaiyah Harris-Smith said. "We saw that they were getting frustrated, so it helped us play better. We were like ... 'They're in their heads right now, so let's take that to our best advantage.'"

UALR used an 8-2 run at the start of the fourth quarter to push its lead as large as 21, capped by a three-pointer from Sali Kourouma -- the Malian forward finished with a game-high 22 points, including 3-of-6 three-point shooting.

Jayla Brooks joined her in double figures with 13 points, and Harris-Smith threatened to post a triple-double, logging 6 points, 7 rebounds and 10 assists.

The Trojans had returned from last weekend's road trip unsatisfied. Although they entered Thursday 6-1 and a game out of first place, UALR knew it was better than the 33 points it scored in its lone conference loss against Ohio Valley leaders Eastern Illinois on Saturday.

The Trojans backed up that belief with one of their stronger offensive showings of the season, topping 60 points for the third time this month and finishing with 18 assists on 25 made baskets.

"[Last game] just showed us we have to score," Harris-Smith said. "And that's what we did tonight."