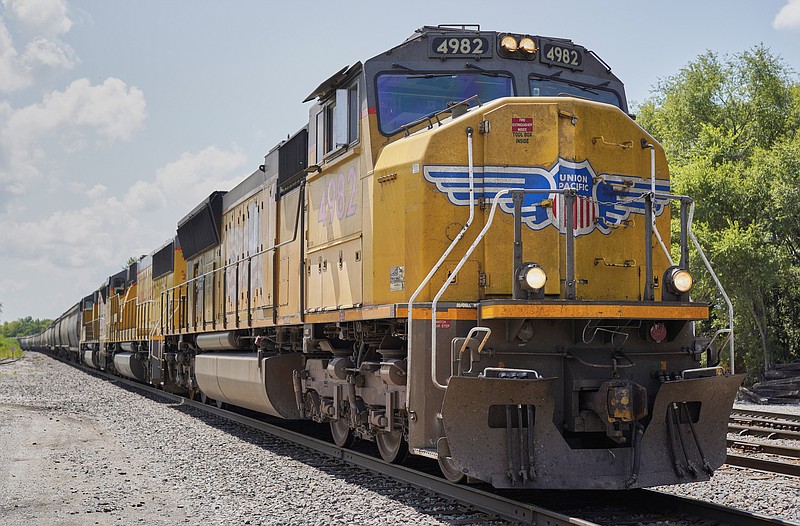 FILE - A Union Pacific train travels through Union, Neb., July 31, 2018. Union Pacific's latest attempt to move toward cutting its train crews down to one person remains on hold because of the longstanding safety concerns of the union that represents conductors. (AP Photo/Nati Harnik, File)

OMAHA, Neb. -- Union Pacific's latest attempt to move toward cutting its train crews to one person remains on hold because of long-standing safety concerns of the union that represents conductors.

The railroad had planned to start a pilot project this year in the western end of its home state of Nebraska, testing how quickly a conductor based in a truck could respond to train problems, and then comparing that response time with how fast the conductor aboard the train could address the problems.

But the Transportation Division of the International Association of Sheet Metal, Air, Rail and Transportation Workers union has refused to agree to the plan because the union believes train conductors play a crucial safety role.

Union Pacific executives told the Federal Railroad Administration that their plan would have helped determine the feasibility of reducing train crews to just an engineer. The executives said the plan might also have given the agency valuable information to consider as it weighs whether to issue a rule requiring two-person crews.

The pilot program wouldn't have actually reduced the train crew to one engineer because Union Pacific, the company said, would have kept conductors on their trains while adding truck-based conductors to test their responses.

Union Pacific has been undaunted in pursuing one-person crews even after the Federal Railroad Administration proposed a rule last summer that would require two people in the cab of a locomotive in most circumstances.

The railroad argues that modern technology -- particularly, the automatic braking system railroads were required to install in recent years -- makes the conductor unnecessary on a train, and executives believe that moving conductors off trains would improve their quality of life by giving them more predictable schedules and by keeping them from going on the road.

Union Pacific spokeswoman Kristen South said the railroad can't move forward with its plan "without it being agreed upon through collective bargaining."

The union confirmed in a letter that no such agreement has been reached. The union has long opposed moving conductors out of locomotives, arguing that conductors help monitor track conditions and radio communications while ensuring engineers remain alert and respond to any emergencies or mechanical problems on the train.

In the case of a derailment or collision, conductors are the first ones to respond before any additional help can arrive.

Union President Jeremy Ferguson urged regulators to approve their proposed rule requiring two-person crews at a hearing last month because "conductors are observing track conditions while engineers are obligated to split their attention between monitoring the controls and the track. Having conductors on trains saves lives and prevents disasters in ways technology cannot. Artificial intelligence absolutely has a role to play, but it cannot replace authentic human intelligence in railroading."

One of the most striking examples of the benefit of having a conductor on board came during a fiery 2013 derailment near Casselton, N.D., when a conductor was able to help separate undamaged tank cars filled with crude oil from the rest of the train so the cars could be pulled away from the fire.

Ferguson also cited an example of a time when a conductor was able to get a young boy off the tracks before the train could hit him by stepping out on the front of the locomotive and waving him away.

But South, Union Pacific's spokeswoman, said "a conductor's job primarily consists of preparing a train for departure and addressing mechanical issues that occur on a route." And Union Pacific believes those duties could be best handled by someone based on the ground who responds to any problems within a certain territory.

In addition to the safety concerns, the union also raised questions about whether a conductor driving a truck would even be able to reach a train in remote locations where no roads are near the tracks.

A conductor in a truck also could easily get delayed in traffic, the union said.

The complex includes five other structures and several designated areas, each with a special purpose, including a material storage yard, storage tracks, a load test facility, a shutdown/startup area, a prewash building, a tank farm and a pump-house, plus a locomotive paint shop, air brake shop, wheel shop, turbo repair shop and component remanufacturing center.