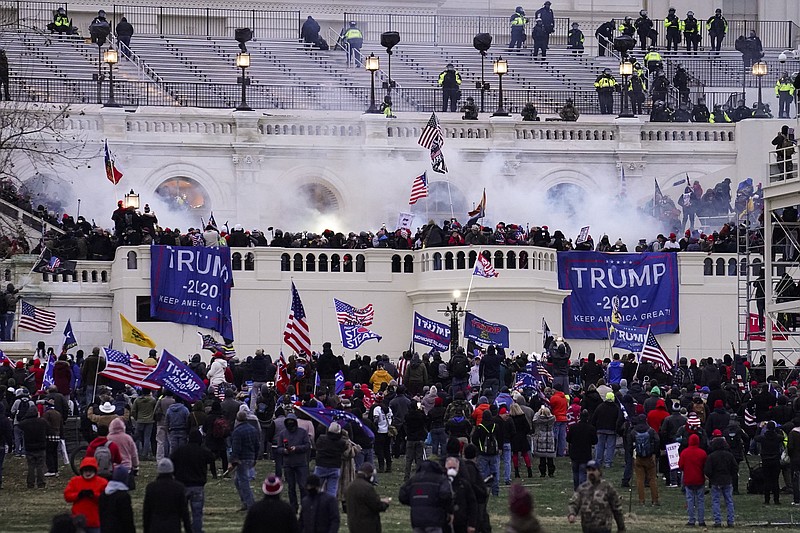 FILE - Insurrectionists loyal to President Donald Trump, storm the Capitol, Wednesday, Jan. 6, 2021, in Washington. Three active-duty Marines have been charged in the riot at the U.S. Capitol. Court records show that Micah Coomer, Joshua Abate and Dodge Dale Hellonen were arrested this week on misdemeanor charges after fellow Marines helped investigators identify them in footage among the pro-Trump mob on Jan. 6, 2021. (AP Photo/John Minchillo, File)

A Marine who said he was waiting for "Civil war 2" and two other active-duty members of the military have been charged with participating in the riot at the U.S. Capitol, authorities said in newly filed court papers.

Micah Coomer, Joshua Abate and Dodge Dale Hellonen were arrested this week on misdemeanor charges after their fellow Marines helped investigators identify them in footage among the pro-Trump mob Jan. 6, 2021, according to court papers.

Dozens of people charged in the riot have military backgrounds, but these three are among only a handful on active duty. A Marine Corps officer seen on camera scuffling with police and helping other members of the mob force their way into the Capitol was charged in 2021.

No defense lawyers for the men were listed in the court docket, so it was not immediately clear whether they have attorneys to comment on their behalf.

Their service records show they are all active-duty Marines. Maj. Kevin Stephensen, a spokesman for the Marine Corps, said it is aware of the allegations and "is fully cooperating with appropriate authorities in support of the investigation."

Coomer, of Indiana, is stationed in Southern California's Camp Pendleton; Abate, of Virginia, is at Fort Meade in Maryland; and Hellonen, of Michigan, is stationed at North Carolina's Camp Lejeune, according to the Marines.

The men spent about 52 minutes inside the Capitol, authorities say.

At one point while in the rotunda, they put a red "Make American Great Again" hat on a statue to take pictures with it, according to court papers. Hellonen was carrying a "Don't Tread on Me" flag, authorities said.

Coomer posted photos on Instagram that appeared to be taken inside the Capitol with the caption "Glad to be apart of history," according to court documents. Days after the 2020 election, he and another person discussed over Instagram message how he believed the election was rigged.

In late January 2021, he told another person in a message that "everything in this country is corrupt."

"We honestly need a fresh restart. I'm waiting for the boogaloo," Coomer wrote in a message detailed in court documents.

The boogaloo is an anti-government, pro-gun extremist movement. Its name is a reference to a slang term for a sequel -- in this case, a second U.S. civil war.

Supporters have shown up at protests over covid-19 lockdown orders and protests over racial injustice, carrying rifles and wearing tactical gear over Hawaiian shirts. The shirts are a reference to "big luau," a riff on the term "boogaloo" sometimes favored by group members.

During an interview related to his security clearance in June, Abate acknowledged walking through the Capitol with two "buddies," investigators said. Abate said they "walked around and tried not to get hit with tear gas."

The Pentagon said Abate was assigned to the Marine Cryptologic Support Battalion, which supports the National Security Agency. One of the largest U.S. intelligence agencies, it has a critical role in deterring cyberattacks and foreign influence operations.

A spokesperson for the agency declined to answer questions about when the agency learned of Abate's statement that he had entered the Capitol or if it took action prior to his arrest to restrict his access to classified information.

The trio faces charges including illegal entry and disorderly conduct.

Among Jan. 6 defendants with military backgrounds are members of the far-right extremist group the Oath Keepers, accused of plotting to violently keep President Donald Trump in power. The group's leader, Stewart Rhodes, a former Army paratrooper, was convicted of seditious conspiracy in November.

A Navy reservist from Virginia accused of storming the Capitol was convicted this week on charges that he illegally possessed silencers disguised to look like cleaning supplies. Hatchet Speed is scheduled to go on trial in his Jan. 6 case later this year.

A former U.S. Army reservist was convicted of storming the Capitol to obstruct Congress from certifying President Joe Biden's electoral victory. Timothy Hale-Cusanelli, who was employed as a security contractor at a Navy base, was sentenced to four years in prison in September.

Information for this article was contributed by Tara Copp, Michael Kunzelman and Nomaan Merchant of The Associated Press. 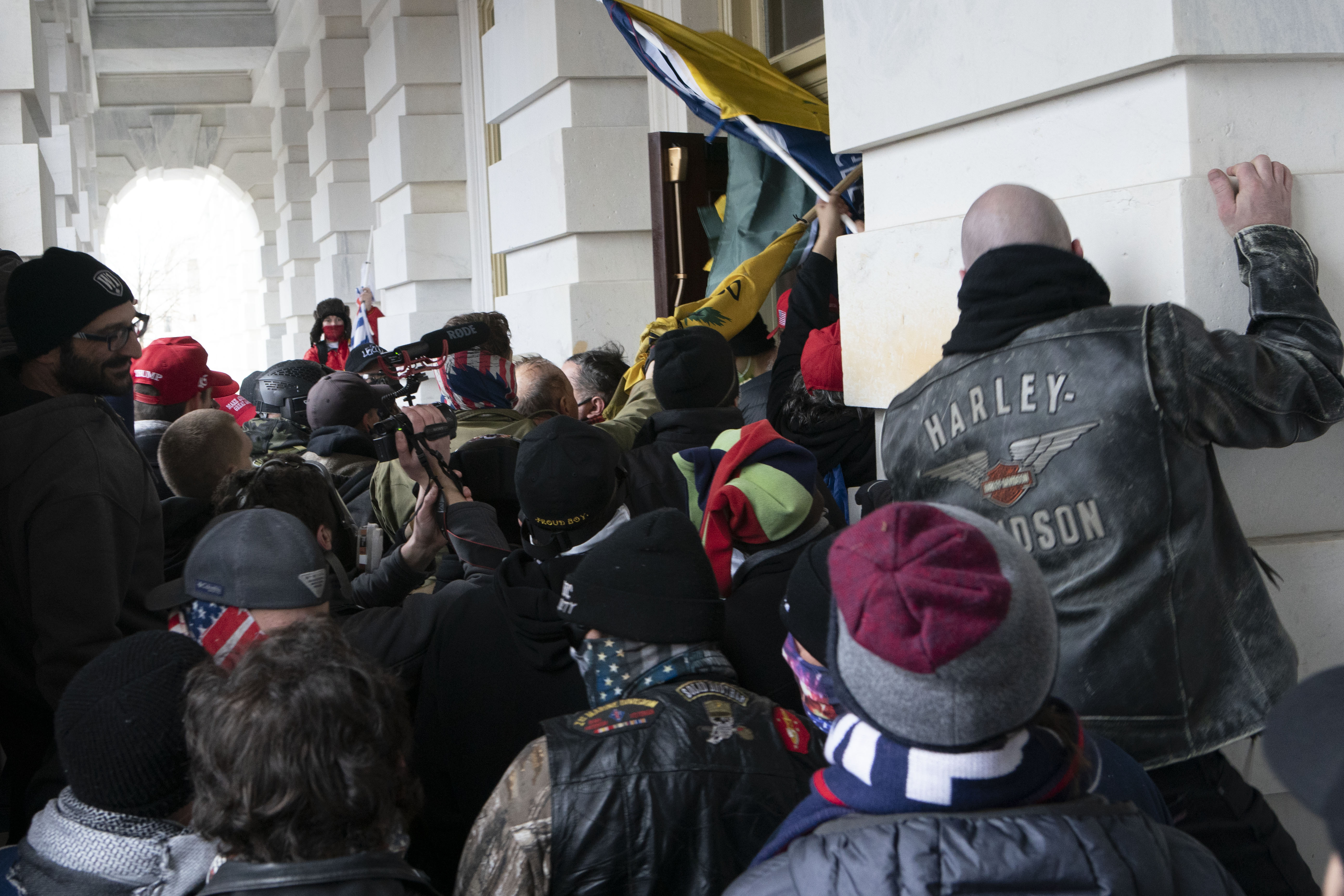 FILE - Insurrectionists loyal to President Donald Trump try to open a door of the U.S. Capitol as they riot in Washington, Jan. 6, 2021. Three active-duty Marines have been charged in the riot at the U.S. Capitol. Court records show that Micah Coomer, Joshua Abate and Dodge Dale Hellonen were arrested this week on misdemeanor charges after fellow Marines helped investigators identify them in footage among the pro-Trump mob on Jan. 6, 2021. (AP Photo/Jose Luis Magana, File)