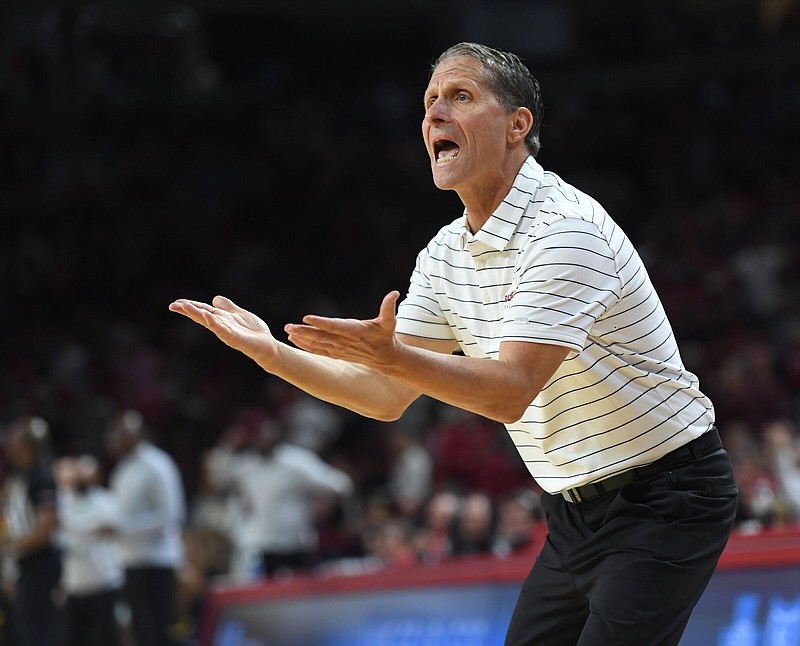 Arkansas Coach Eric Musselman and the Razorbacks enter today’s game against Ole Miss at Walton Arena in Fayetteville on a fourgame losing streak. The Razorbacks, the Rebels, LSU and Mississippi State are tied for last place in the SEC standings. (NWA Democrat-Gazette/Andy Shupe)

FAYETTEVILLE -- Either the University of Arkansas men's basketball team or Ole Miss is going to pull itself out of the bottom of the SEC standings when the No. 25 Razorbacks and Rebels meet at 11 a.m. today at Walton Arena.

There are 12 SEC regular-season games remaining.

"Everybody knows there's so much basketball in front of all of us with all these great opportunities," Davis said. "There's plenty of those chances left. I'm sure Arkansas feels the same way as we do."

The Razorbacks have lost four consecutive games since their lone SEC victory over Missouri 74-68 at Walton Arena on Jan. 4.

The only team to play four of its six first six SEC games on the road, the Razorbacks have their next three conference games at Walton Arena, where they're 41-3 since the 2020-21 season.

"It's good," Razorbacks freshman guard Anthony Black of having a stretch of home games. "But at the end of the day, we've got to win.

"These next three home games, we've got to win them all if we're going to do what we're trying to do," Black said. "We've got to just start winning."

Ole Miss broke a six-game losing streak and got its first road victory in four tries by beating South Carolina 70-58 on Tuesday night.

Arkansas' coaching staff watched the Ole Miss-South Carolina game at the team's hotel in Columbia, Mo., before the Razorbacks lost at Missouri 79-65 on Wednesday night.

"I give Kermit's team a lot of credit," Arkansas Coach Eric Musselman said. "They really competed.

Ole Miss junior guard Matthew Murrell had 23 points, 9 rebounds and 3 assists at South Carolina and hit 8 of 15 shots, including 5 of 11 three-pointers.

"Any time you win a game on the road in our league, it's a really good feeling," Davis said.

Murrell is averaging a team-high 15.6 points.

"Murrell's a really good scorer," Musselman said. "He's got three-point range. You've got to chase him off screens with the high hand before the catch.

"You've got to locate him as he comes across half court. Can't give him any air space."

Ole Miss forward Jaemyn Bradfield, a 6-8 junior, had 8 points, 6 rebounds and 4 assists against the Gamecocks.

"We know they're a tough opponent, and we're going to go there and give it all we've got."

The Rebels have lost five in a row against the Razorbacks and last won at Walton Arena in 2015.

Ole Miss sophomore guard Daeshun Ruffin will be available for today's game, Davis said, after missing the previous two games because of an illness.

Ruffin, the only McDonald's High School All-American to play at Ole Miss, is averaging 8.6 points and 17.2 minutes in nine games this season. He averaged 12.6 points and 25.9 minutes in 14 games last season before suffering a knee injury.

"Just because you get cleared to play doesn't mean you're 1,000%, got all the pop back and everything," Davis said of Ruffin's recovery. "It's ongoing."

Brazile suffered a season-ending knee injury in the ninth game. Smith will miss his eighth consecutive game -- and 14th of season -- as he continues working to recover from a knee injury.

CHALK TALK Arkansas has won four in a row over Ole Miss and is 8-1 in the previous nine meetings. The Rebels’ only victory in that span was 84-67 in 2019. … The Rebels last won at Arkansas 96-82 in 2015. … The Razorbacks have lost four consecutive games since beating Missouri 74-68 at Walton Arena on Jan. 4. … Ole Miss won 70-58 at South Carolina on Tuesday night to break a six-game losing streak. … Anthony Black leads Arkansas with 68 assists … Ricky Council is averaging 35.3 minutes to lead the SEC. Black is second at 34.5 minutes per game. … The Razorbacks are 8-1 at Walton Arena this season with their lone loss to No. 4 Alabama 84-69 on Jan. 11.