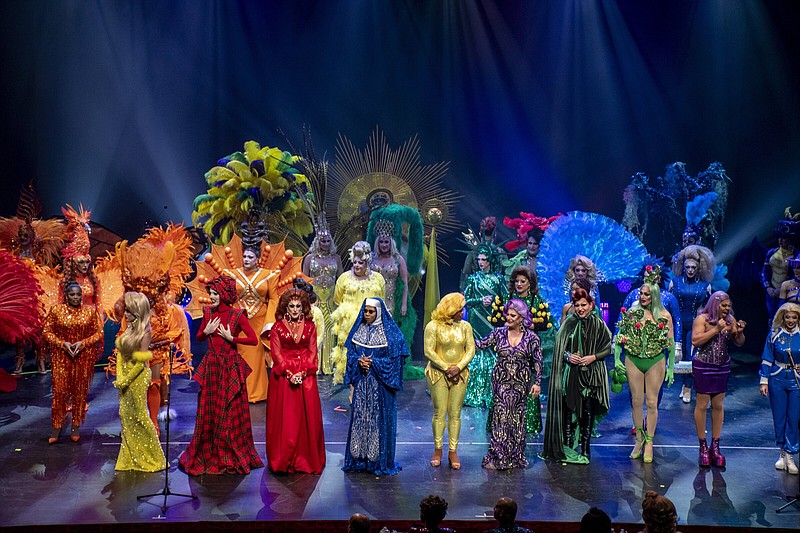 The top 10 contestants are announced at the Miss Gay America Pageant at the Robinson Center Performance Hall in Little Rock on Friday. More photos at arkansasonline.com/121pageant/. (Arkansas Democrat-Gazette/Cary Jenkins)

The Miss Gay America pageant of female impersonators in Little Rock crowned a winner Friday night amid uncertainty about whether such events could ever again be held in Arkansas.

Tatiyanna Voche', Miss Gay D.C. America, was crowned with this year's national title late Friday, the fourth night of the national competition held at Robinson Center Performance Hall. It was put on by Mad Angel Entertainment.

The 43 drag queens vying for the title in Little Rock were judged in “male” (in a suit and tie) interview, evening gown, creative costume, onstage interview and talent categories.

In 1972, Little Rock’s Norman Jones, performing as Norma Kristie, became the first-ever Miss Gay America. In 1974, he assumed ownership of the pageant and ran it until his retirement in 2008. Jones is the owner of Triniti and Discovery nightclubs in Little Rock, the two largest nightclubs in Arkansas, and has operated them for the past 35 years.

Meanwhile, a bill was on its way through the Arkansas Legislature that would add drag performances to the official definition of “adult-oriented businesses.”

The current draft would ban drag shows on public property or anywhere someone under age 18 could view them. The bill would add such performances to a list of spaces considered adult-oriented: adult bookstores or video stores, adult cabarets, adult live entertainment and theaters, massage establishments that offer adult services, escort agencies and nude model studios.

Andrew Poindexter, or “Dextaci,” the winner of last year’s Miss Gay America title, said drag is no different than any other art form.

“Drag has been a part of our culture since day one — multiple films and movies and family friendly stuff that’s in the homes of everybody,” said Poindexter, of Monroe, La. “Such as Martin Lawrence as Big Mama in the 'Big Mama’s House' movies, such as the late Robin Williams in 'Mrs. Doubtfire.' So you have the tendency to want to laugh, and it be OK when it’s presented in that fashion.”

Poindexter competed for eight years before taking home the crown. His favorite part about drag is to take his creativity and throw it into left field and become “anything you want to be.”

“What I love specifically about Miss Gay America versus a lot of the other LGBTQ pageant systems is Miss Gay America is the true art form of female impersonation,” he said. “So you have to transform yourself from all boy to create the illusion of a woman. Whether that’s by pantyhose, body padding, excessive costuming, hair, makeup, you name it.”

If SB43 is passed, it will make it hard for the art form to survive in Arkansas, Poindexter said. But the bill goes beyond that, he said — it will affect the lives and families of those who do drag full-time.

“There are businesses that their revenue is created from entertainers like myself that pack the bars, which would have to close and relocate,” he noted. “So this is big. This is a big-picture thing. This goes beyond men in dresses. This affects livelihoods through and through.”

In regard to SB43, the Little Rock Convention and Visitors Bureau referred to its equity statement, restating its commitment to “ensuring that Little Rock is a destination that is welcoming and open to all who seek to come here.” The full statement can be found at littlerock.com/about/lrcvb-equity-statement.

The bureau is the marketing organization for Little Rock and manages the Statehouse Convention Center, the Robinson Center, the River Market and multiple parking facilities.

Michael Dutzer, executive producer for Mad Angel Entertainment and Miss Gay America, predicted that the pageant would end if the bill passes.

“We’re too big to perform in a bar, and even most bars are close to public areas, so we’re not quite sure how it’s going to impact them,” he said. “But the law’s so vaguely written that … they talk about sexualization of children and how it confuses children, drag queens reading stories to children, and it’s funny because I went to the Senate hearing [Thursday] to testify and nothing anybody said changed their mind. I mean, they voted within a second in favor to move it along.”

The Robinson Center had offered to sign a three-year extension contract with the Miss Gay America Pageant, but after SB43 was brought forward, they had to retract their offer over fear of cancellation.

The bill cleared the Senate’s City, County and Local Affairs Committee on Thursday on a voice vote with no audible dissent.

“There was one person supporting it, talked for 30 seconds,” Dutzer said. “And then you had a bunch of people talking against it who all have valid points about fostering hate through legislation and why some places are looked at differently than others and how this is seems to be targeting a group of people ... I looked at the people that were presenting the law and voting, and you have to ask yourself how many of these people have actually been to a show, and I’d love for them to come and see what we do because we’re not vulgar, we’re not having sex.”

One of the issues legislators said they have with drag queen story time at libraries, drag shows at bars and clubs and the pageant is how children will be hurt. But Dutzer said no one can point to an example of someone being hurt by the performers.

“We can go there and present proof of how it’s hurting our community, but that’s not important because they don’t see you as people,” he said. “They’re looking at one aspect of your life, which was why it was important for me to go and say 'This is who I am.' I’m not from Arkansas, but I do business here. I’m a dad, with two daughters ... We’re a regular family, and I just wish people saw that normal side of who people are day-to-day.”

“I think that bill is absolutely ridiculous,” he said. “They don’t understand how far that boat goes, it just doesn’t go to drag, it goes to all theater performances. Drag started in the theater. It started with William Shakespeare. To remove that sort of thing from theater, it really is a miseducation of society. So hopefully, the bill gets overturned, which I’m sure it will, because it’s completely outrageous.”

Cassie Hunter, Brown’s stylist, said drag is her “escape” and agreed that “it’s crazy that we’re still discussing these things in 2023.”

Andrew Pritt, onstage as Diedra the Duchess of Windsor, has performed as a drag queen for 15 years while simultaneously working as a promoter of contestants. He promoted Dextaci, the current Miss Gay America title holder.

Pritt, who is from Warren, is a survivor of cancer and said that drag helped heal him. He was also the first openly gay person to seek statewide office when he ran as a Democrat for lieutenant governor in 2006. This past year he ran for House District 94.

“Because of SB43 and all these other bills that are eventually going to be defeated, we’re losing revenue in the state,” Pritt said. “And that’s what we have to look at from here. The Republican Party used to like to say that it’s a party of small business, small government, and yet what they’re doing is they are taking revenue out of the pockets of taxpaying Arkansans.”

Blaze Duvall of Newport, an Arkansan representing Miss Gay Tennessee America, said the bill is scary for him and his family.

“My oldest has always told us that one day she’s gonna be a Miss USA Diva. She’s grown up seeing entertainment, not drag, but entertainment as her family,” he said. “And if this bill passes and it makes a law out of it, it’s going to crush her dreams.”

Duvall said Tennessee is considering similar laws, and he’s hoping there’s not a cascade of bills in other states due to Arkansas’ vote.

“It would break my heart to be not to be able to see someone else’s dream come to fruition, come to life, because this is something that’s going to save some little boy from suicide in the next 10 years,” he said of drag. “And I want to be that gateway that helps him feel like, ‘OK, I am safe here.’” 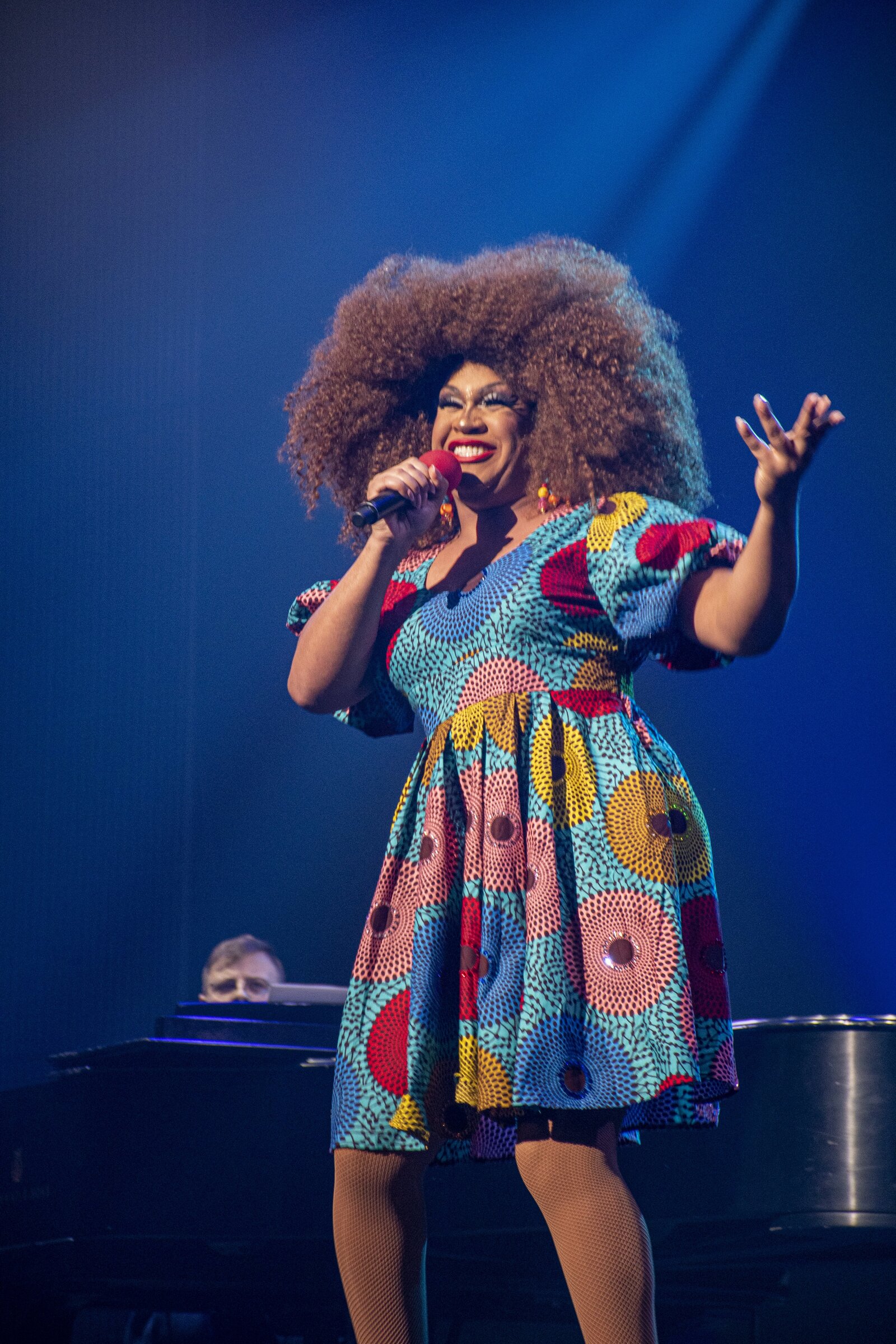 Gizelle Carter, named one of the top ten contestants at the Miss Gay America pageant, performs at the Robinson Center Performance Hall in Little Rock on Friday. (Arkansas Democrat-Gazette/Cary Jenkins)