Dead or alive? Full effects of winter damage won’t be seen until spring 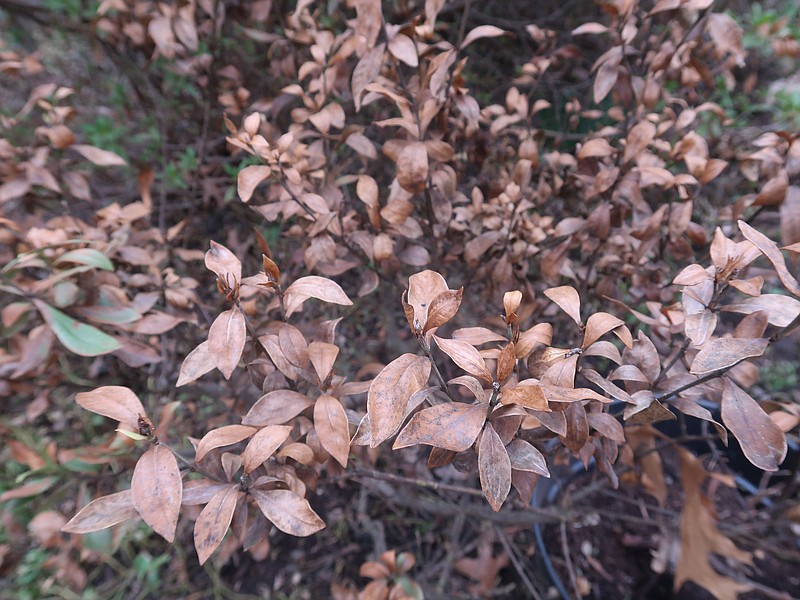 Can this gardenia be saved? Only time will tell. (Special to the Democrat-Gazette/Janet B. Carson)

If you read the question-and-answer garden column in this newspaper each Saturday, you know what is on almost every gardener's mind is winter damaged plants.

Everyone wants to know whether their plants are dead or alive, and when and if they can start pruning.

The winter event of Dec. 22 really took its toll on many plants. We went from balmy temperatures in the mid 50s to a low of single digits in what felt like a nanosecond. On Dec. 23 it was 3 degrees in Little Rock with a high of 17 — a more than 40-degree drop in temperatures in 24 hours.

Plants and people were taken by surprise.

Many gardeners are trying to compare this extreme cold with the February 2021 snowstorm, when we had the unprecedented 16 inches of snow in Central Arkansas and frigid temperatures statewide. Many plants were damaged, but more than 50% rebounded and eventually came back. The big difference was snow. Snow is a great insulator and a giver of moisture as it melts.

We were not bone dry in December 2022, but it was dryer, and the plants were much more exposed, with no snow for insulation (and no insulation unless you covered plants or moved them into a garage).

Plus, many plants were still thinking they were growing. It had been pretty mild after our early freeze in October.

Adding insult to injury were cold winds that blew off coverings and lowered temperatures. Add to that the fact that the extremely low temperatures lasted for quite a few days, and you can see why we have damage.

When things finally thawed, gardeners started inspecting their plants. The first impressions were not awful, but there was some damage. The next week, when warmer weather arrived, the real damage reared its ugly head. Then, hard rain and wind started knocking off leaves on previously evergreen plants.

Now we have bare stems where leaves should be, and lots of brown or withered leaves on azaleas, gardenias, loropetalum, photinia and many more shrubs.

What's the answer? Dead or alive? We won't know for sure until spring arrives, and plants begin to grow (or not). It is possible that more damage could appear when summer heat and dry conditions take a toll.

[Gallery not showing above? Click here to view: arkansasonline.com/121cold]

While many gardeners are already pruning or pulling plants, this is premature, and in the long run could cause more damage. Not all of these unsightly plants are dead. Pruning off dead or damaged growth now — when we have at least a month and a half of more potential winter weather — exposes more of the plant to damage.

While the brown leaves may not be attractive, they can buffer or protect undamaged limbs or leaves below.

Be aware that your yard looks like everyone else's — devoid of color right now, other than some green, and a lot of brown. Look the other way. Give your plants a chance.

It was a guide, not a mandate.

As winters have become milder, the department began revising the zones, and gardeners started pushing the limits.

Many of us in the old zone 7 started planting a lot of zone 8 plants or trying more tender plants. We have planted palms, loropetalum, Indian hawthorn, Distylium and sweet olive. They have done well. Until now.

Many of us have rosemary, azaleas and camellias that have lived in our gardens for many years undamaged, but now appear dead.

We can't change what happened. We can only wait and see what starts growing and what doesn't, in the spring. Then we can begin to cut back the damaged and the dead branches.

When we inspect our plants in the spring, we do need to look for split stems or trunks. Split bark is indicative of frozen tissue that will impede the movement of water and nutrients in the stems.

Often winter-clobbered plants look OK in the spring, but when they become stressed in the summer heat, the long-term effects of winter are evident. I do think we will have to replant some things.

Plant placement will also come into play. Are you willing to be patient and let a plant re-sprout from the roots and then take the time to retrain it? Or does it occupy such a prominent place in your yard that you want to replace it? This will be a decision for the individual gardener.

Woody trees and shrubs are more of a concern than winter annuals, which also took a big hit. Some pansies and violas are struggling to recover, but in all likelihood will not be robust and blooming until it is time to pull them and replant with summer color.

Dormant perennials should be OK and will bounce back. One of our winter favorite perennials, the normally evergreen hellebores, took a hit as well, but if you can cut off the damaged foliage, new growth is rebounding and blooms are appearing.

Every yard is different, and we are seeing diversity among the varieties of individual species. There may be one dead-looking azalea next to one that has no damage.

Time will tell, and it may also give us suggestions on what to try next time.

Let's hope the sub-freezing weather of 2022 is one for the record books and not a reoccurring problem. Many of our nurseries were fortunate that they could move containers into protected areas — something home gardeners could not do with planted-in-the-ground material — so there will be replacements available. But still, be patient and optimistic that plants can rebound, until proven otherwise.