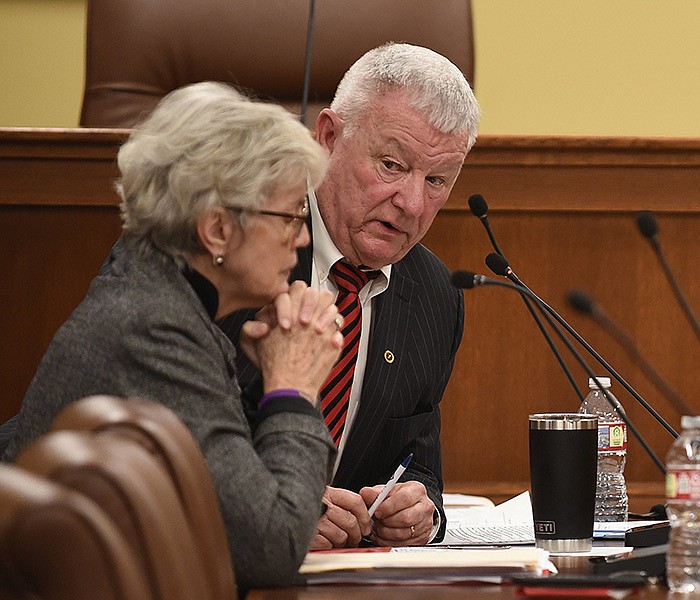 The Arkansas panel responsible for setting salaries for elected officials proposed on Friday pay increases of 6% for the state's constitutional officers and members of the Legislature.

The Independent Citizens Commission approved the proposal in a majority vote and plans to consider a resolution recommending the salary increases during a Feb. 3 meeting.

Tommy May, vice chair of the board, was the lone dissenter in the vote. He opposed the increase, citing falling inflation and a review comparing salaries of Arkansas' elected officials with those in neighboring states.

"I don't believe we're looking at 6% plus increases in other states, which would be the benchmark that we could look at," he said.

The six-state review showed members of the Arkansas General Assembly had the highest salaries after their counterparts in Oklahoma in 2021. The other states included in the comparison were Iowa, Louisiana, Missouri and Tennessee.

Chair Annabelle Tuck noted the figures for the other states were likely out of date and could be misleading.

"Our problem here ... because we're meeting during the session, the Legislative Bureau did not have time to get us the figures, the more recent figures, so I don't know what other legislator salaries really are in 2022 going into 2023."

[SALARIES: Interactive graphic not showing up above? Click here » arkansasonline.com/121salaries23/]

Members of Arkansas' General Assembly currently make $44,356 a year, except for the Senate president pro tempore and the House speaker, who are paid $50,661 annually, according to figures provided by the state auditor's office.

The lieutenant governor position, which is considered part-time, pays $46,704 a year, according to the state auditor's office.

In a letter addressed to committee members, three Arkansas lawmakers said they believed legislative pay increases were not justified.

"Arkansas's workers and families have faced extraordinary levels of inflation over the past year, but many have not received a commensurate pay increase as the economy continues to flounder," the letter read. "In our view, it would be inappropriate to raise legislative pay at this time when many Arkansans have to face choices such as whether to heat their homes or buy their groceries."

Tuck noted the letter did not necessarily represent the viewpoint of all legislators.

"Obviously they represent three viewpoints out of many at the Legislature," she said. "I wanted to put their viewpoints on the record, but I also have to acknowledge that there may be other viewpoints that have not been expressed to us."

Robert Brech, state budget director, told members of the panel there was room in the budgets for pay increases. He provided a forecast of the general revenue for fiscal year 2023 that estimated Arkansas would see $8.325 billion in gross general revenue. Of this projected revenue, $258.1 million is expected to go to the state's central services and constitutional officers funds.

"You get about a third of that $258 million," Brech said. "That's more than what you're spending."

If the money in the fund isn't spent by the end of the year, Brech said much of it would be swept into the central services fund, which pays the salaries of most state officials.

The Arkansas Independent Citizens Commission was created under Constitutional Amendment 94, approved by voters in November of 2014. The panel is responsible for setting the salaries for the state's elected officials, including judges and prosecuting attorneys. 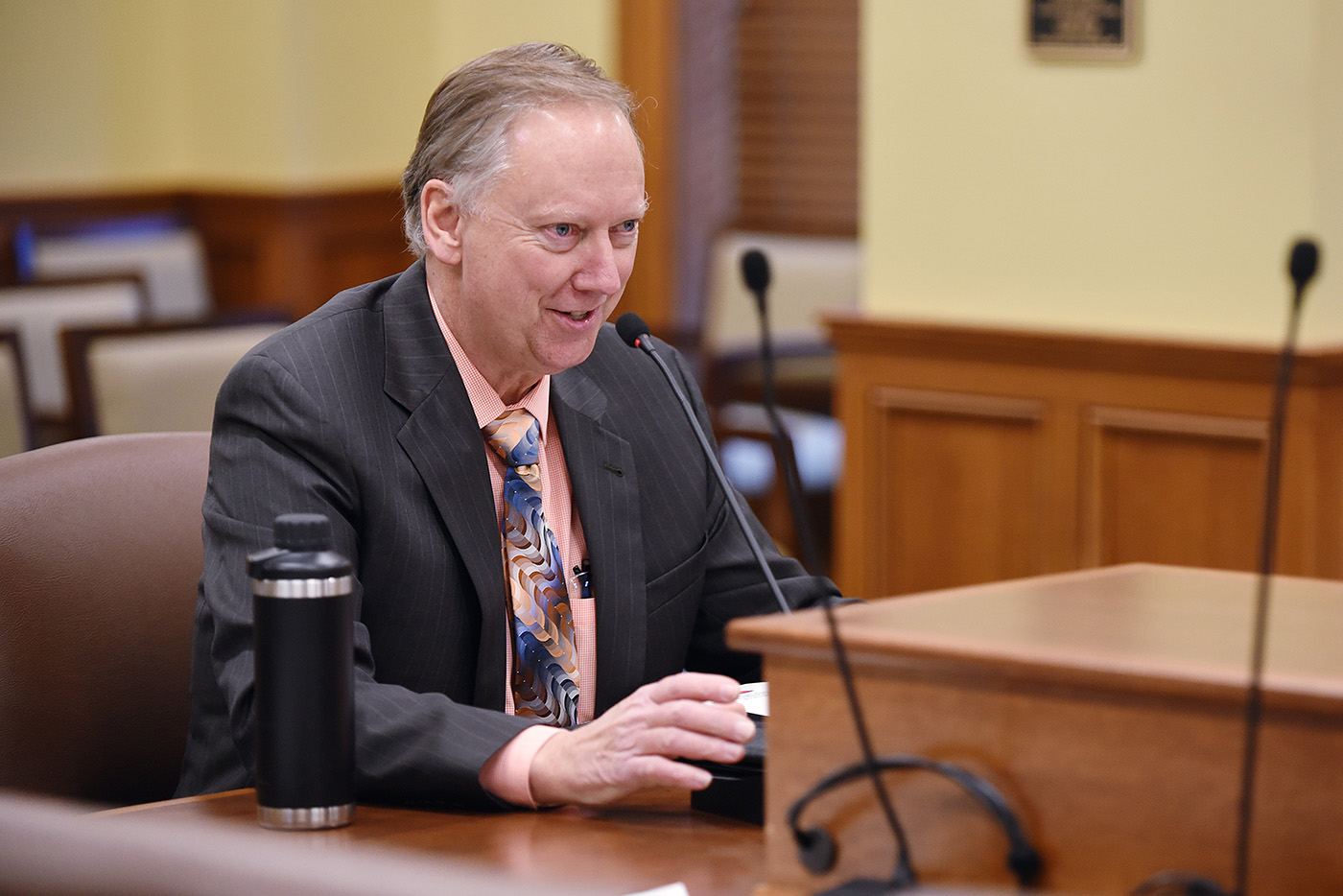 State Budget Director Robert Brech told the Arkansas Independent Citizens Commission on Friday that there would be room in the state’s central services and constitutional officers funds for the pay increases. (Arkansas Democrat-Gazette/Staci Vandagriff) 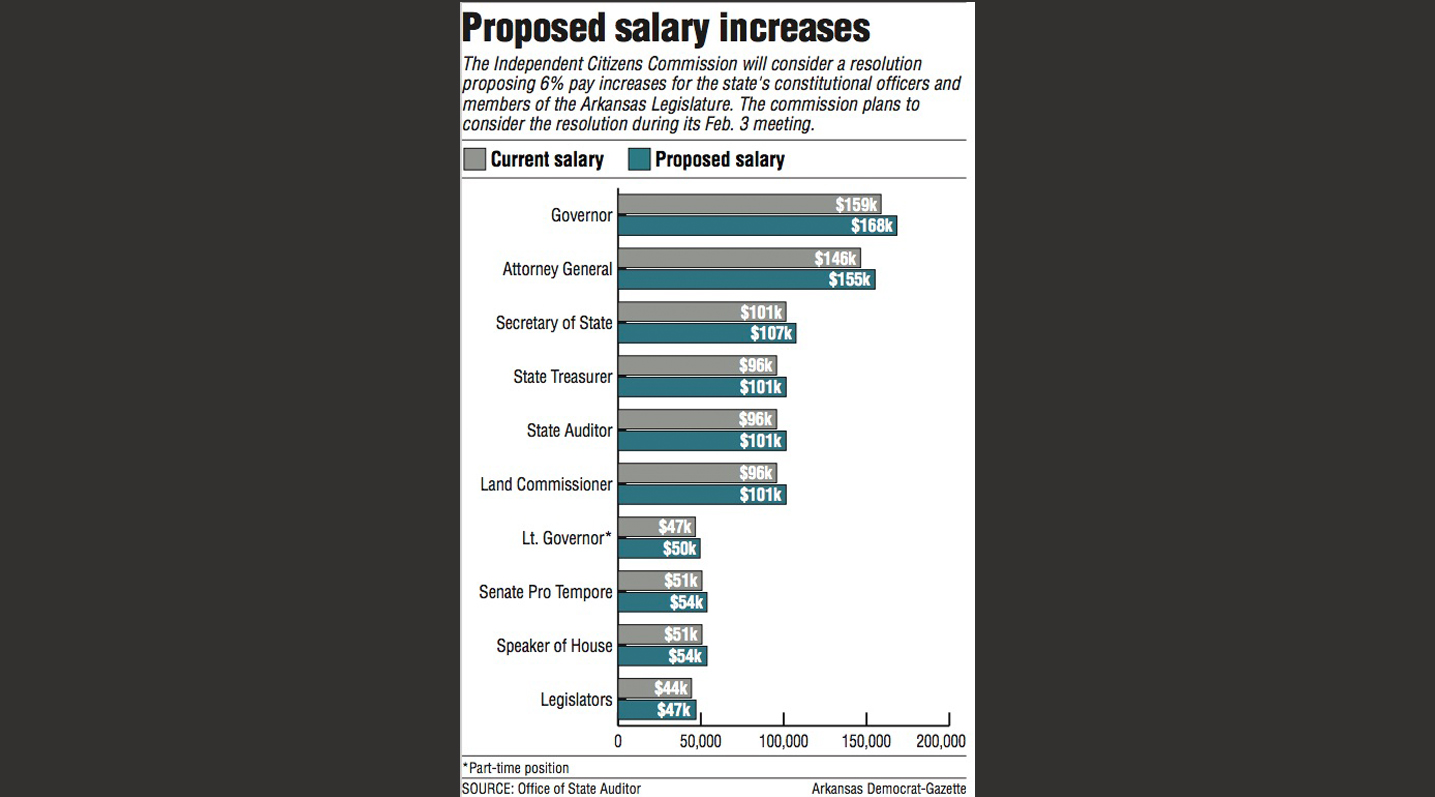