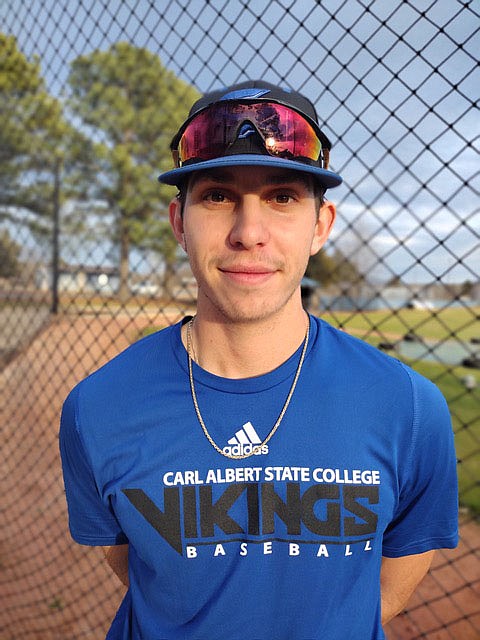 Reed Carroll isn't the type of baseball player who tends to be the sentimental type.

But the Carl Albert State College sophomore shortstop does admit it's hard to imagine being 8 one day and 20 the next.

"It's absolutely flown by, especially seeing all the people I've grown up playing with and against, and being at a school like this, it's weird to see us as adults now," Carroll said. "It's not something I'm upset about or anything, but every once in a while you look back and laugh. Every year it goes faster, especially toward the end of my [CASC] career."

Carroll and the Vikings open the 2023 spring season on Friday against Panola Junior College in Carthage, Texas.

Carroll hasn't been on many teams over the years, either. While some players change teams like T-shirts, he played five seasons for the Arkansas Wildcats travel team, four more years at Greenwood, and is now about to embark on his sophomore season at Carl Albert.

He also played for two summers with the Fort Smith Sportsman.

"I love the game; I love playing the game," Carroll said. "It's no fun to sit and watch when you could still be out there. The brotherhood that comes along with baseball, especially in junior college, when we're around each other all the time, we really are like brothers.

Carroll anchored third base for the Sportsman in 2022. He is shifting to shortstop this spring to make room for former Fort Smith Southside slugger Kent Carlisle.

Carroll, who has been on the Dean's list since enrolling at CASC, is completely different on and off the field.

"I'm a very shy person; I'm definitely reserved off the field," Carroll said. "I think I get [competitiveness] from my parents [Andy and Kristen Carroll]. The adrenaline gets going, and I just go for it. I'd really love to improve to where I was last year. Playing on the field with a lot of sophomores and third-year guys was really a challenge for me. I'd like to improve my numbers from last spring.

"I think we have a chance to do some great things this year."

Former Greenwood standout Jaelin Glass is having a nice bounce-back campaign after missing her freshman season and part of the 2022-23 season at Crowder College.

The redshirt freshman scored eight points and pulled down five rebounds in the team's loss to North Arkansas earlier this week. For the season, Glass is third in scoring with 11.5 points per game. She's appeared in the team's last six games.

She made her first appearance on Dec. 9 against John Wood Community College, scoring four points. She had nine points the next day against National Park.

This month, in four games, Glass is averaging 14.2 points per game. She also is pulling down 4.5 rebounds and handing out 1.8 assists per game.

Gray had matched her career-high with 12 points in a win over the University of the Ozarks earlier this month. Gray has started 13 games this season and is averaging 5.2 points per game, along with 2.0 assists and 1.8 rebounds per game.

Sophomore Tamaury Releford (Northside) and the Connors State Cowboys are unbeaten no more.

The Mavericks' Montez Ward hit a game-winning basket with 0:01.5 left to play.

Releford, who is averaging 11.4 points per game for the Cowboys' basketball team, had 13 points in the team's win over Western Oklahoma.

Cejay Mann (Alma) went 0-for-4 from the field with two rebounds and a pair of assists in the University of Science and Arts of Oklahoma 90-63 loss to John Brown University on Thursday. Mann had scored 10 points in the team's previous game, an 82-74 loss to Texas Wesleyan. ... Makya Perryman (Muldrow) scored three points in the University of the Ozarks' 62-46 loss to Le Tourneau College (Longview, Texas) on Thursday in American Southwest Conference action. Perryman also had four rebounds and two assists for the Lady Eagles (7-10 overall and 4-6 in the American Southwest Conference). ... Kaila Cartwright (Greenwood) is prepping for her senior softball season at Arkansas Tech. Cartwright went 3-1 in 2022. The Golden Suns open the season Feb. 3 in Conroe, Texas, against the University of Texas A&M-Kingsville.