He’s bringing the pay phone back 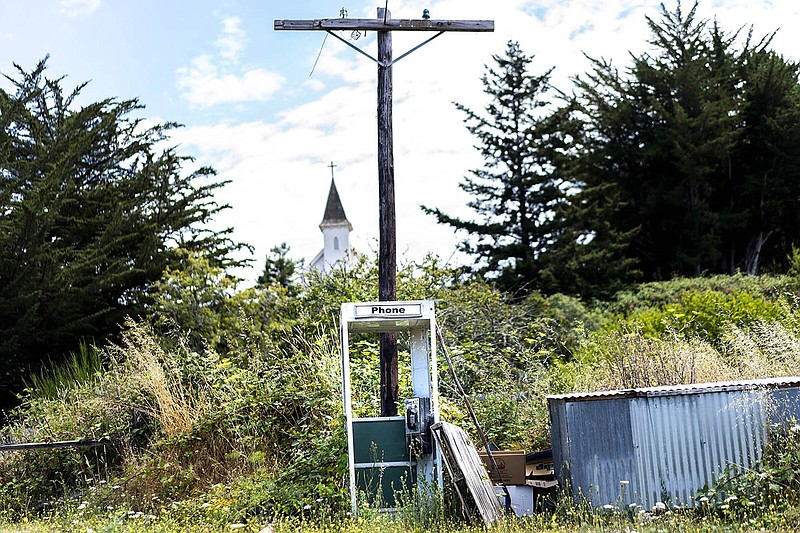 An abandoned phone booth sits along the roadside in the small town of Petrolia, Calif., in August. (The Washington Post/Melina Mara)

Attached to the wall outside the store entrance, shoppers will find a shiny silver-and-black oblong box with a coin slot: a working pay phone. But in this case, no quarters are required. Any call in the United States will be free.

"I was talking to one guy in his 20s about it, and when I showed him my pay phone, he had no idea what he was looking at," said Mike Dank, 31. "It was like an alien had delivered it from outer space."

Dank, a technical engineer from Springfield, Pa., about 30 miles from Philly, has loved pay phones since he was a teenager. Fifteen years ago, he picked one up for $20 at a flea market and stored it in a corner of his parents' basement.

"Pay phones are nostalgic to me -- I used one to call my parents to come pick me up when I was in high school," he said. "After I bought one, I thought, 'I'm going to do something with this phone someday -- maybe install it as my house phone.'"

When he bought his first cellphone as a high school senior in 2008, Dank soon gave up on that idea. Then a few years ago, he heard about a group called Futel that had installed about 10 public pay phones around Portland, Ore., that could be used by anyone, free of charge.

The phones worked through broadband internet connections, and there was no charge to make calls anywhere in North America.

"It was just a really cool idea, and I wondered if I could do something similar in Philadelphia," Dank said. "There are lots of people who can't afford a cellphone or a phone bill."

Homeless people, low-income families and anyone who just doesn't want the hassle of owning a cellphone would all benefit, he said.

"Pay phones have unfortunately been pretty much phased out -- we only have about 50 still working in Philadelphia," Dank said. "I thought it would be great to bring them back."

He and a friend, Naveen Albert, decided in June to start PhilTel -- a phone collective that would convert old donated pay phones into free working phones using coinless circuit boards rewired to connect through the internet.

They're now looking for people to donate pay phones, phone booths, telephone cables, routers and pay phone parts such as handsets and keypads so that they can rewire and install public phones in neighborhoods throughout Philadelphia.

For their first project, Dank hauled his old collectible 60-pound pay phone from his parents' basement.

He then convinced Steve McLaughlin, the owner of Iffy Books, to let him install the first PhilTel phone outside his shop near Chinatown in Philly.

"Mike's a good customer and has been coming to the store since we opened," said McLaughlin, 37. "I'm always looking for creative ideas to shift our culture, and a free pay phone is a great example of shared resources. I was all in."

He and McLaughlin set a Dec. 17 date to hold an installation party at the bookstore and introduce people to the quirky joys of using a free pay phone.

"Lots of younger people today have never used one," Dank said. "They might walk past one and not even notice that they were looking at a pay phone. They seem irrelevant. But I'm hoping to change that."

Some people are surprised he wants to bring back the retro phones, but Dank said he's not alone in his enthusiasm. He points to a Google map site that tracks pay phones that have been reported to still be operating in the United States, and one that is devoted exclusively to the Philadelphia area.

"I was happy when I discovered there are pay phone aficionados who appreciate pay phones as much as I do," he said. "It used to be you couldn't go anywhere without seeing one."

ON THEIR WAY OUT

Pay phones have been on their way out for decades -- ever since cellphones became popular in the 1990s, he noted. A 2021 Pew Research Center study found that 97% of Americans now own a cellphone of some kind.

It was 1995 -- four years after Dank was born -- when the number of pay phones in the United States peaked at 2.6 million.

By the end of 2016, there were less than 100,000 pay phones still in service, according to the Federal Communications Commission. New York City bid farewell to what some called the city's last pay phone in May, and there were only six pay phones said to be working in D.C. in 2021.

It's a nostalgic kick for some people to stumble upon a working pay phone today -- particularly if it's enclosed inside a Superman-style booth, said Dank, adding that the clunky phones supply a lifeline.

"I've heard about situations of domestic violence where a partner tries to control everything, including cellphone use," he said. "There are people who want to get help, but they don't have a way to communicate. Free pay phones on the street would help to resolve that."

If the phone at Iffy Books is widely used, he hopes to place five more around town next year. Each one will cost about $300 to install and retrofit for internet use, he said.

"Libraries, art spaces, soup kitchens, community centers -- I can think of lots of public places that would benefit," Dank said.

Karl Anderson, director of Portland's Futel, said Dank is on the right path.

"Our phones get a lot of use -- we even have volunteers now who will answer the phone if somebody dials for an operator," Anderson said. "Sometimes people just want to hear a real human voice on the line."

He said he is hopeful that Dank's project will become as popular as the free phones in Portland.

"I'd like to see PhilTel succeed -- phones like these would be a useful thing to have anywhere," Anderson said. "They're a direct way for anyone to get help, whether they want to find organizations to help with housing and medical services, or they want to call the mayor."

Even if somebody just wants to order a pizza, Dank said he's good with that.

"If we can save a pay phone from the landfill and trigger some fun memories for people, I'm happy," he said. "I hope that bringing back a pay phone will help improve somebody's life."