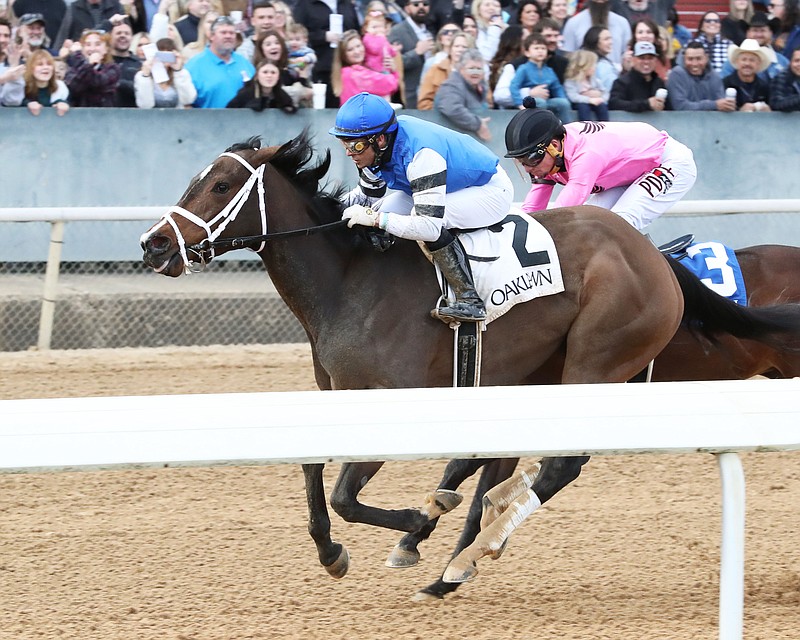 HOT SPRINGS -- Confidence oozed from this winner and her connections.

Alex and JoAnn Lieblong's Hot and Sultry seemed unfazed by an atypically slow start to take the lead late in the homestretch and win the $150,000 American Beauty Stakes in 1:10.10 over 6 furlongs before an announced crowd of 22,500 at Oaklawn Racing Casino Resort on Saturday.

The start might have helped Hot and Sultry -- heretofore a frontrunner -- in her second start for trainer Norm Casse.

"I almost think it was for the best, her breaking poorly like that today," Casse said. "The idea was maybe to stretch her out next time. I don't know what we'll do next. We have options."

Casse said Oaklawn's Grade II 1 1/16-mile Azeri Stakes is among his options for Hot and Sultry.

Hot and Sultry, the 6-5 favorite, made her half-length win over second-place I'm the Boss of Me look nearly effortless. Sarah Harper, ridden by Rafael Bejarano and trained by Ron Moquett, overcame a momentary brush with a drifting I'm the Boss of Me to hold onto third, 31/2 lengths behind the winner and 1 length in front of fourth-place Perfect Happiness in the six-horse field.

"[Hot and Sultry] was in front of me, and at the top of the stretch, he came out a little bit," said Rafael Bejarano, the jockey for Sarah Harper. "We almost clicked heels. I was in a perfect position. He was trying to win the race, too, but he should've stayed straight."

"She left [the gate] with business on her mind," Court said. "I was hoping for a bigger result. She gave me a big performance, ground-saving."

Hot and Sultry, a 4-year-old filly by Speightster, was fourth, 11/4 lengths off the lead.

"I worked the horse this week, and I was like, 'Man, this horse wants to run,' " said David Cabrera, the jockey for Hot and Sultry. "When we came out a step slow and they came over, I had to take up a little bit. But you know what, I thought, 'That's OK.' I knew how much horse was underneath me."

The leaders fanned out at the head of the stretch, with Connie K nearest the rail, a head behind the new leader, I'm the Boss of Me, a daughter of Midshipman ridden by Francisco Arrieta and trained by Greg Compton.

With 3/16 of a mile to run, Connie K had dropped to third. She would finish fifth, 8 lengths behind the winner.

Arrieta said he was pleased by I'm the Boss of Me's effort.

"She tried hard, man," Arrieta said. "She put her heart out there. She tried really good today."

Hot and Sultry eased past I'm the Boss of Me at the 16th pole and opened a half-length lead through the wire.

"I been working her since Christmas, and I could see how much talent she has," Cabrera said. "She just needed an out."

Hot and Sultry raced for the time in nearly five months when she finished second in a 6-furlong allowance at Oaklawn on Dec. 30

"David comes in and works most of the horses for us," Casse said. "He's a great rider. He's a great person, but he's also really good in the mornings. He's good at telling me when horses are doing well, when they've worked well for him. I just find that when jockeys come in confident and when they ride confidently, they usually win."