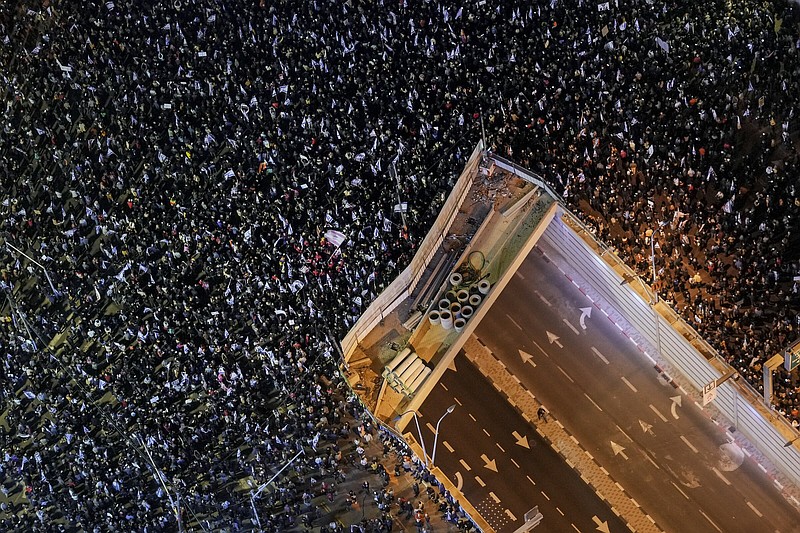 Israeli media, citing police, said some 100,000 people were out protesting.

The protest followed another demonstration last week that also drew tens of thousands in an early challenge to Netanyahu and his ultranationalist and ultra-Orthodox government -- the most right-wing in Israeli history.

The government says a power imbalance has given judges and government legal advisers too much sway over lawmaking and governance. Netanyahu has pledged to press on with the changes despite the opposition.

Protesters filled central streets in the seaside metropolis, raising Israeli flags and banners that read "Our Children will not Live in a Dictatorship" and "Israel, We Have A Problem."

"This is a protest to defend the country," said opposition leader and former Prime Minister Yair Lapid, who joined the protest. "People came here today to protect their democracy."

"All generations are concerned. This is not a joke," said Lior Student, a protester. "This is a complete redefinition of democracy."

Other protests took place in the cities of Jerusalem, Haifa and Beersheba.

In addition to the protests, pressure has built up on Netanyahu's government after the country's attorney general asked Netanyahu to fire a key Cabinet ally after a Supreme Court ruling that disqualified him from holding a government post because of a conviction of tax offenses.

While Netanyahu was expected to heed the court ruling, it only deepened the rift in the country over the judicial system and the power of the courts.

Last week, Netanyahu, who is on trial for corruption, vowed to continue with the judicial overhaul plans despite the protests. Opponents say the changes could help Netanyahu evade conviction in his corruption trial or make the court case disappear altogether.

One protester said she thinks the judicial changes are meant to protect Netanyahu. "The aim is to save only one person and one only -- this is Mr. Netanyahu, from his trial, and that's why I'm here."

Netanyahu's coalition was put for a new test Friday after a disagreement between Cabinet members over the dismantling of an unauthorized settlement outpost in the West Bank.

Defense Minister Yoav Galant, a member of Netanyahu's Likud party, ordered the removal of the outpost, upsetting a pro-settlement Cabinet member who had issued a directive to postpone the eviction pending further discussions.