ARKANSAS A TO Z: Ledbetter dedicated her time to equality movements 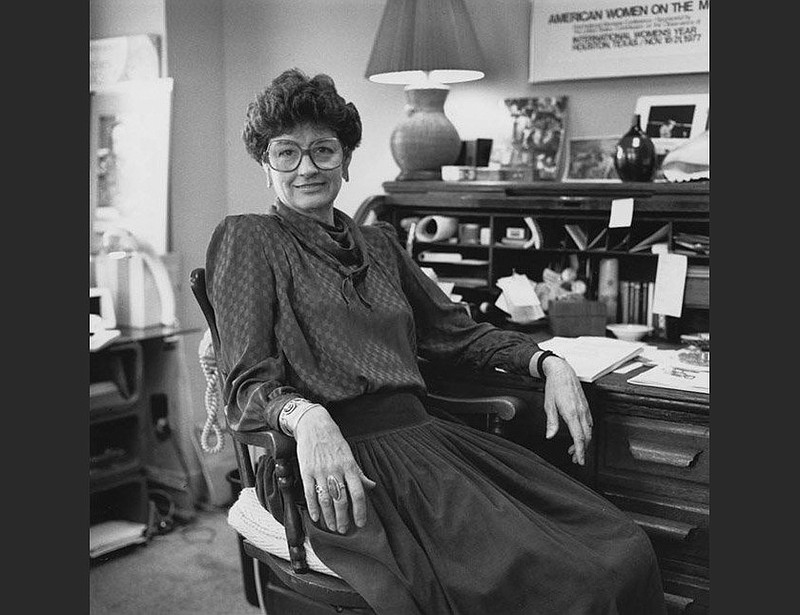 Brownie Ledbetter was a lifelong political activist who worked in many controversial and crucial campaigns in Arkansas, as well as nationally and internationally. A catalyst in many local grassroots organizations, she exhibited a dedication to fair education and equality across racial, religious and cultural lines.

Brownie Ledbetter was born Mary Brown Williams on April 28, 1932, in Little Rock. She was the first of four children born to William H. Williams, a businessman and dairy farmer, and Helon Brown Williams. Due to her brown eyes, she was nicknamed "Brownie" by her family. After her mother's death in 1947 and her father's death in 1950, Williams and her siblings were raised by relatives Grainger and Frances Williams, who moved into the Tall Timber Jersey Farm with their own two children.

After graduating from what is now Little Rock Central High School, she went on to attend Agnes Scott College in Decatur, Ga., from 1950 to 1953. However, she did not fit the image of Southern womanhood the school projected and did not finish her degree. On July 26, 1953, she married Calvin Reville Ledbetter, a lawyer who later became a political science professor. The pair moved to Germany, where Calvin Ledbetter was stationed with the U.S. Army, for two years before returning to the United States and residing first in Illinois and later in Arkansas. The couple had three children.

While in Germany, Brownie Ledbetter learned about the growing crisis surrounding the desegregation of Central High School and was concerned about the ramifications for race and education in Arkansas. Her aunt signed Ledbetter, along with her sisters, up for the Women's Emergency Committee to Open Our Schools (WEC), founded by Adolphine Fletcher Terry, Sara Murphy and Vivion Brewer in support of the reopening of public schools in Little Rock. When Ledbetter returned to Little Rock, she immediately began volunteering with the group. After the dissolution of the WEC in 1963, Ledbetter worked with the Panel of American Women that was organized by Murphy. Ledbetter moderated the first 25 sessions of the panel, a nonpartisan forum focused on religious and racial diversity in which women discussed their own personal experiences in an effort to bridge the gap between people of different races and cultures. The panel expanded its mission, becoming the Arkansas Public Policy Panel to organize and assist grassroots groups in 1981. Ledbetter served as volunteer executive director, training 60 citizen lobbyists before retiring in 1999.

In 1983, Ledbetter founded the Arkansas Fairness Council, a coalition of grassroots organizations, and served as president and lobbyist for 15 years. Other organizations on Ledbetter's resume include the Arkansas Women's Political Caucus (founding member), the ERA/Arkansas Coalition (organizing member, 1973–1978), Arkansas Career Resources Inc. (founder and executive director from 1985 to 1990), the Southern Coalition for Educational Equity (state director from 1982 to 1985), the Arkansas State Advisory Committee to the U.S. Commission on Civil Rights, the State Federation of Business and Professional Women (legislative director), and the Women's Environment and Development Organization (co-founder with Democratic New York congresswoman Bella Abzug).

In addition to her grassroots activities, Ledbetter worked with over 15 political campaigns and served as organizer and consultant in many of them. In 1967, she served as campaign manager for her husband's successful bid for the Arkansas General Assembly. During his time in office, she organized a group of legislators' wives who wrote a weekly mimeographed record to keep the general public informed on legislative activities. Ledbetter served as the first political action chair of the National Women's Political Caucus in 1973. Her work with the Democratic Party also includes a place on the State Democratic Central Committee from 1968 to 1974 and the position of affirmative action committee coordinator for the state Democratic Party in 1973–1974.

Ledbetter received many awards and recognitions, including the American Civil Liberties Union Civil Libertarian of the Year in 1992, and the Mary Hatwood Futrell Award from the National Education Association in 2005.

CORRECTION: After her parents’ deaths, Brownie Ledbetter and her siblings were raised by relatives Grainger and Frances Williams. Frances Williams’ first name was misspelled in an earlier version of this article.