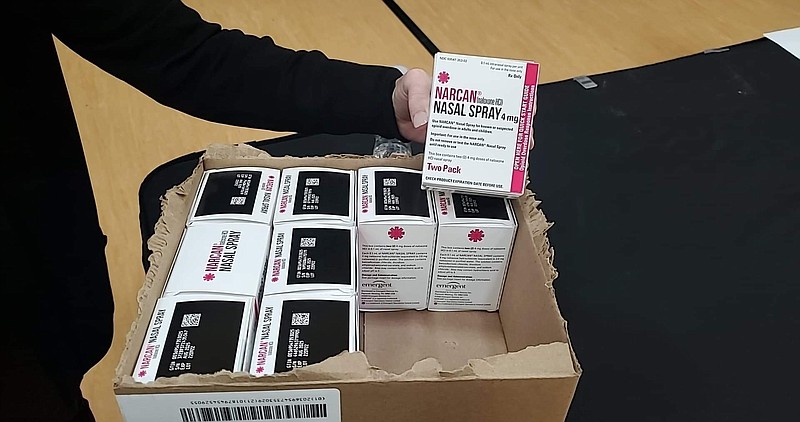 Narcan kits come with two nasal spray doses that can save lives if a person is overdosing on opioids by reversing the effects of the addictive drugs. (Pine Bluff Commercial/Suzi Parker)

Ron and Jen Worbington have a mission to tell their stories of addiction and help others.

They are part of Arkansas Recovery Ministry, also known as ARM180. Armed with Narcan kits, the pair offered a training to nearly 100 people Thursday at the White Hall Community Center. The focus: Why every household in Arkansas needs a Narcan kit on hand at all times.

"Overdose deaths in Arkansas are skyrocketing," Ron Worbington said. "Narcan is our No. 1 tool to fight and reverse the effects of an overdose."

The event was held in partnership with Jefferson Regional Medical Center and the Arkansas Rural Health Partnership as part of the group's efforts to address opioid addiction in Arkansas.

Wendy Talbot, director of patient experience at JRMC, said that the more information about Narcan that can get out to the public the healthier Pine Bluff and surrounding communities will become.

"It's a life-saving treatment that can better our community," Talbot said.

Narcan, also known as naxolone, is an "opioid antagonist" and can be administered as a nasal spray to counter the effects of an opioid overdose. Examples of opioids are morphine, Oxycontin, fentanyl and heroin.

Once the drug is administered as a spray into a person's nostrils, it starts to work immediately. Someone overdosing could become responsive 2 to 3 minutes after their first dose is given. Sometimes, repeated doses have to be administered.

Narcan kits are free and more than 100 of them were given out at Thursday's event.

"If you can save a life, you can get that person help with rehab or an addiction program," Ron Worbington, who lives in DeWitt, said. "That's a life than can have a better future."

Ron Worbington, the founder of ARM180, is a recovering addict. He told the crowd that his journey with opiates began with a prescription to Vicodin and Oxycontin in 2001.

By 2015, he had added fentanyl and methamphetamine to his daily drug cocktail. In that period of time, Ron Worbington said he went to rehab four times, had been divorced once, made two trips to county jails, suffered several overdoses and lost dozens of friends.

"It's a vicious cycle, and people think it's OK to take it because a doctor prescribed it to them," he said.

The cost of opioid addiction is expensive not just for the healthcare system but the economy as people lose time at work because of decreased productivity. There is also the cost of treatment, which is sometimes borne by employers. And addictions cost the criminal justice system.

Arkansas ranks No. 2 in the nation for opioid prescriptions. But because of state policies, monitoring systems through pharmacies and a crackdown on doctors who prescribe opioids, that number of prescriptions are decreasing. Concurrently, Narcan administrations are increasing.

But because Narcan is still not widely available, opioid-related deaths are remain high.

Ron Worbington said that in 2021, the state had 493 fatal overdoses. He said that a definite connection exists between the pandemic and the use of fentanyl. People between the ages of 20-39 have received the most Narcan administrations.

Narcan is now given frequently by pharmacists when a opioid prescription is filled.

The use of fentanyl has skyrocketed in Arkansas as it has throughout the country.

The United States Drug Enforcement Administration states on its website that fentanyl is the single deadliest drug threat the country has ever encountered. The synthetic opioid is in urban and rural areas. Fentanyl is often mixed with heroin, cocaine, benzodiazepines (like Xanax) or methamphetamine.

Last year, between May 23 to Sept. 8, the DEA seized enough fentanyl for 36 million lethal doses. Ron Worbington said that in the time it took him to finish his one-hour presentation, another 12 people in the United States had overdosed on opioids.

Projects like the one presented by the Worbingtons are funded in part by a multi-million dollar settlement Arkansas received from opioid manufacturers and distributors. The current legislative session will work to decide the future of the rest of the settlement money.

The Arkansas Opioid Recovery Partnership is overseeing the disbursal of millions of dollars to counties and cities to help combat the opioid crisis. The partnership, so far, has offered $16 million for programs like the Worbingtons' that address opioid misuse and addiction. Kits, which are critical in saving lives, are paid for by these funds.

Narcan can reverse the effects of an overdose if administered in time.

Jen Worbington, the wife of Ron Worbington, is also a recovering addict. She recently completed a 500-hour program to become a peer support specialist like her husband to help others with their recovery experience.

"This allows me to team up with those who are interesting in recovery goals and be there for them if anything comes up," she said. "It's all confidential and people will be more honest with you when they know they have that confidentiality."

She often visits police departments and jails to help with getting those arrested for opioids into rehab and detox programs. She also speaks at schools.

The Worbingtons stressed one key point: If a person has has Narcan available -- and every household should have a kit -- a person administering it will not be arrested. Having Narcan is not illegal. In fact, it is encouraged.

"It saves lives and it is encouraged by law enforcement to have it on hand," Ron Worbington said. "You just never know who may be on something and you have no idea."

He said if you suspect someone is overdosing, call 911. A person should also check for a pulse, look for shallow breathing and possibly foaming at the mouth.

A person should also survey the environment to look for syringes, pills, powders, baggies or tin foil. Nothing should be touched before law enforcement arrives.

If a person is unsure if the person is overdosing, Narcan can be administered. It will not hurt a person, but it might save a life.

The Worbingtons, with the support of the Arkansas Rural Health Partnership, plan to host over trainings throughout southeast Arkansas.

"I've got the personal experience," Ron Worbington said. "I've been down that road. I like to tell my story because I want people to know I know what I'm talking about because I've lived the life and I hope to save others." 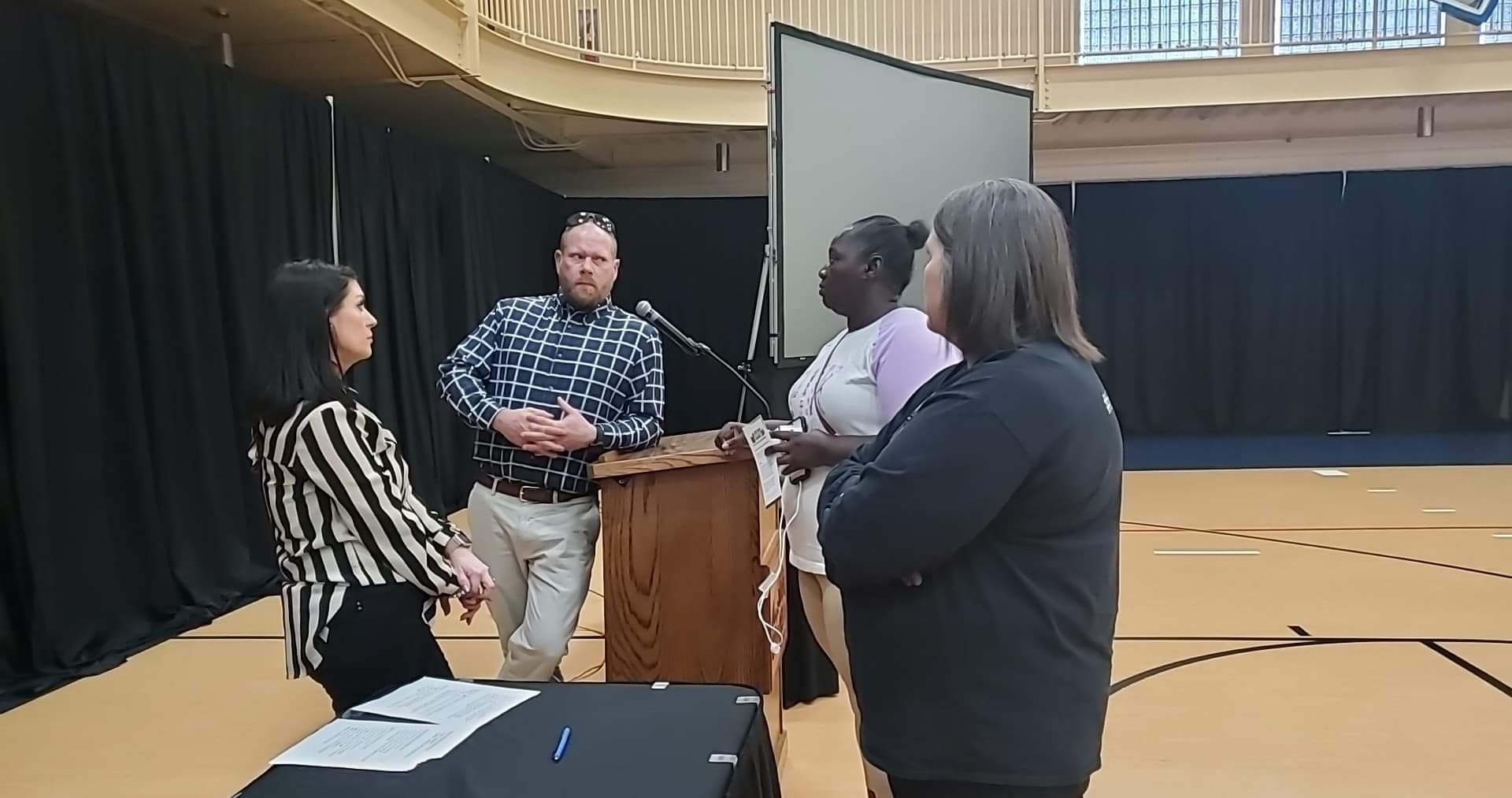 Jen and Rob Worbington with Arkansas Recovery Ministries, or ARM180, talks with attendees at Thursday's Narcan event about opioid abuse in the state and how Narcan can save lives. (Pine Bluff Commercial/Suzi Parker)