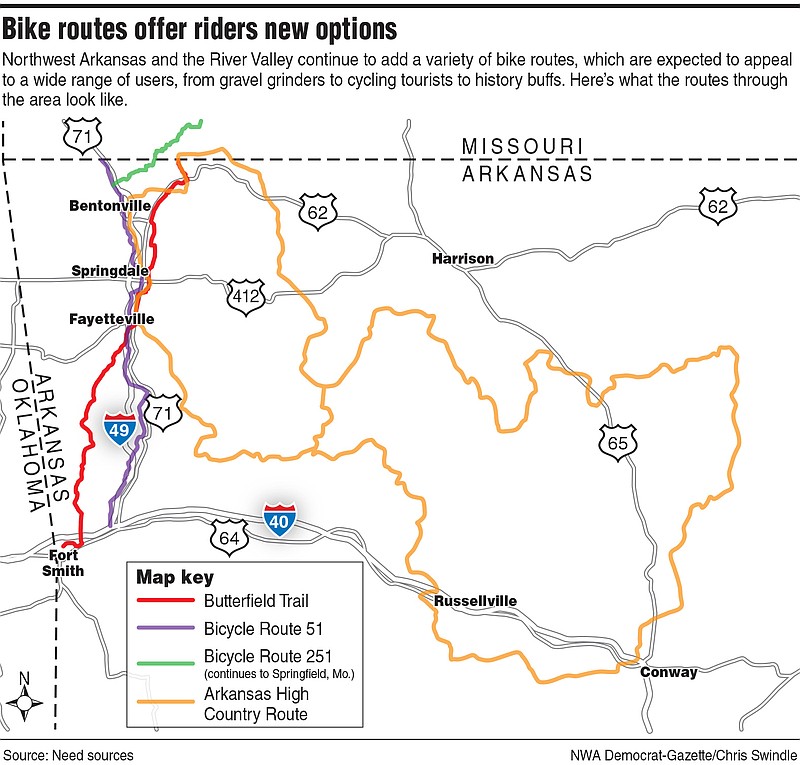 FAYETTEVILLE -- Options continue to grow for those who prefer to get their views of natural beauty and history in Northwest Arkansas from the seat of a bicycle.

Planners in Northwest Arkansas and the River Valley recently approved a route for the Butterfield Trail Experience through the region, but there's also an extensive Arkansas High Country Route already in use and two proposed national bike routes that are in the process of being approved: U.S. Bike Route 51 and U.S. Bike Route 251.

Paxton Roberts, a local cycling enthusiast and managing director of the nonprofit Trailblazers, said the Butterfield Trail and the U.S Bike Route designations have been a long time coming, and he's excited about the prospects for local riders and tourists.

"We have a lot of avid local cyclists that love riding their bikes on the Razorback Regional Greenway, but they're not comfortable riding on roads and so the addition of these new routes just provides more options," Roberts said

The bike route designation is one step, he said, but the additional next step is to make sure that people who are riding on these routes are safe.

Roberts said the routes provide needed connectivity to other U.S. bicycle routes like the ones in Missouri and Tennessee.

"That helps get people to put Arkansas on their itinerary as they're touring the country versus before they just kind of had to skip over us," Roberts said.

Elizabeth Bowen, with the Northwest Arkansas Regional Planning Commission, has been working to get the two U.S. Bike Route designations since 2017.

Bowen said the routes typically appeal to cyclists who regularly ride longer distances and locals who ride for transportation.

The entire route of the Butterfield Overland Trail was recently designated a national historic trail by Congress, including two portions in Arkansas.

Reese Brewer, the director at the Frontier Metropolitan Planning Organization in Fort Smith, said the designations should be an economic driver by way of ecotourism for the entire region as well as events that spill over into the economy.

"I believe those trails and routes will really have the ability to help create jobs and sustain small businesses for people across the state," Brewer said.

"I think, even more importantly, just the ability of local residents to get out and use those facilities and enjoy them with their families and help their health is a great asset for the state of Arkansas and for all these regions," Brewer said.

The U.S. Bicycle Route System is a project to create publicly accessible bicycle travel routes across the country with the goal of building broad support for bicycling and bicycle travel in communities nationwide.

A 50,000-mile network of bicycle routes is planned following urban streets, county roads, greenways, trail systems and state highways for the purpose of long-distance, interstate bicycle travel. Since the National Corridor Plan was approved in 2008, the system has grown to nearly 19,000 total miles.

Planners in Northwest Arkansas and the River Valley recently approved proposed routes for USBR 51 and USBR 251. Each community with jurisdiction over a part of the route are on board, according to Bowen. The Arkansas Department of Transportation is expected to submit an application to the American Association of State Highway and Transportation Officials later this year requesting the routes be officially approved.

USBR 51 would basically follow U.S. 71, from Joplin, Mo., through McDonald County in Missouri and Benton, Washington, Crawford and Sebastian counties in Arkansas.

The route would follow U.S. 71 to the Northwest Arkansas Razorback Greenway at Bella Vista then follow the Greenway to Fayetteville before getting back on U.S. 71 and going to Alma. The route is also expected to be extended through Van Buren and Fort Smith in the future. Fort Smith city directors want to see the route go to to the Fort Smith National Historic Site.

Arkansas' first U.S. bike route was officially designated in December. USBR 80 through Arkansas begins in Little Rock, where the Big Dam Bridge crosses the Arkansas River, and ends in West Memphis, on the Mississippi River at the Tennessee border. Along the way, it passes through rural areas and historical downtowns of the Arkansas Delta.

Brewer said her planning organization is pushing for U.S. Bike Route 80 to be extended west from Little Rock to Fort Smith and Van Buren.

"The reason it makes sense is you can start connecting into not only USBR 80, but USBR 51 and then the High Country trail route using those facilities, too," Brewer said.

Fort Smith and Van Buren have been historically significant because of their strategic location on the Arkansas River and what was once the nation's western border for well over 150 years, being home to military forts and bases as well as Judge Isaac C. Parker's federal court and gallows.

"I think all throughout the state of Arkansas there's such rich history and community treasures that each community can share with visitors and tourists alike," Brewer said. "It makes sense that it would come to Arkansas and to Fort Smith because of all the rich history, for instance the Butterfield Overland Stagecoach and Mail service coming out of Missouri and also coming out of Memphis."

Into the high country

For more hardcore cyclists looking for a wilderness adventure that will test their riding skills and stamina or just wanting to get far away from the maddening crowds, the Arkansas High Country Route may be just the ticket.

The Arkansas High Country Route is about 1,200 miles comprised of three large adjacent loops. The Northwest and Central loops begin and end in Bentonville and Russellville, respectively. The South Loop begins and ends in Little Rock.

Roberts said lately he's mostly splitting his riding time between a gravel bike and a mountain bike and loves the High Country route. He went on several test rides when it was being developed.

"It's fantastic. What's really great is it truly highlights the beautiful scenery and the incredible topography that we have in Arkansas, and it gets people to travel to places around the state they may not normally go so that they can uncover the unique beauty," Roberts said.

An annual endurance race held on the route draws professional and amateur cyclists from around the country.

The Arkansas High Country Race is a multiday, self-supported 1,037-mile event that follows the perimeter of the Arkansas High Country Route. Racers are not allowed to have a support crew, which means they have to carry all the gear and supplies they'll need or buy what they need at the limited opportunities along the way. They also have to keep their equipment maintained.

Only about half of of the starters finish the grueling race, according to organizers.

There are some amenities along the route including eight state parks, 15 Forest Service campgrounds, nine Corps of Engineers parks and three national parks in addition to the Ozark-St. Francis and Ouchita National Forests.

There are a wide variety of road conditions. The routing on the three loops is roughly 50% gravel and 50% pavement, and the climbs/descents can reach gradients between 17% to 21%. There are 89,000 feet of climbs.

The Northwest loop climbs and descends over 120 miles of gravel roads of various quality, follows paved back roads for about 90 miles and uses the Razorback Greenway for about 30 miles.

Riders can change loops, north or south of the Arkansas River, between Dardanelle and Russellville. 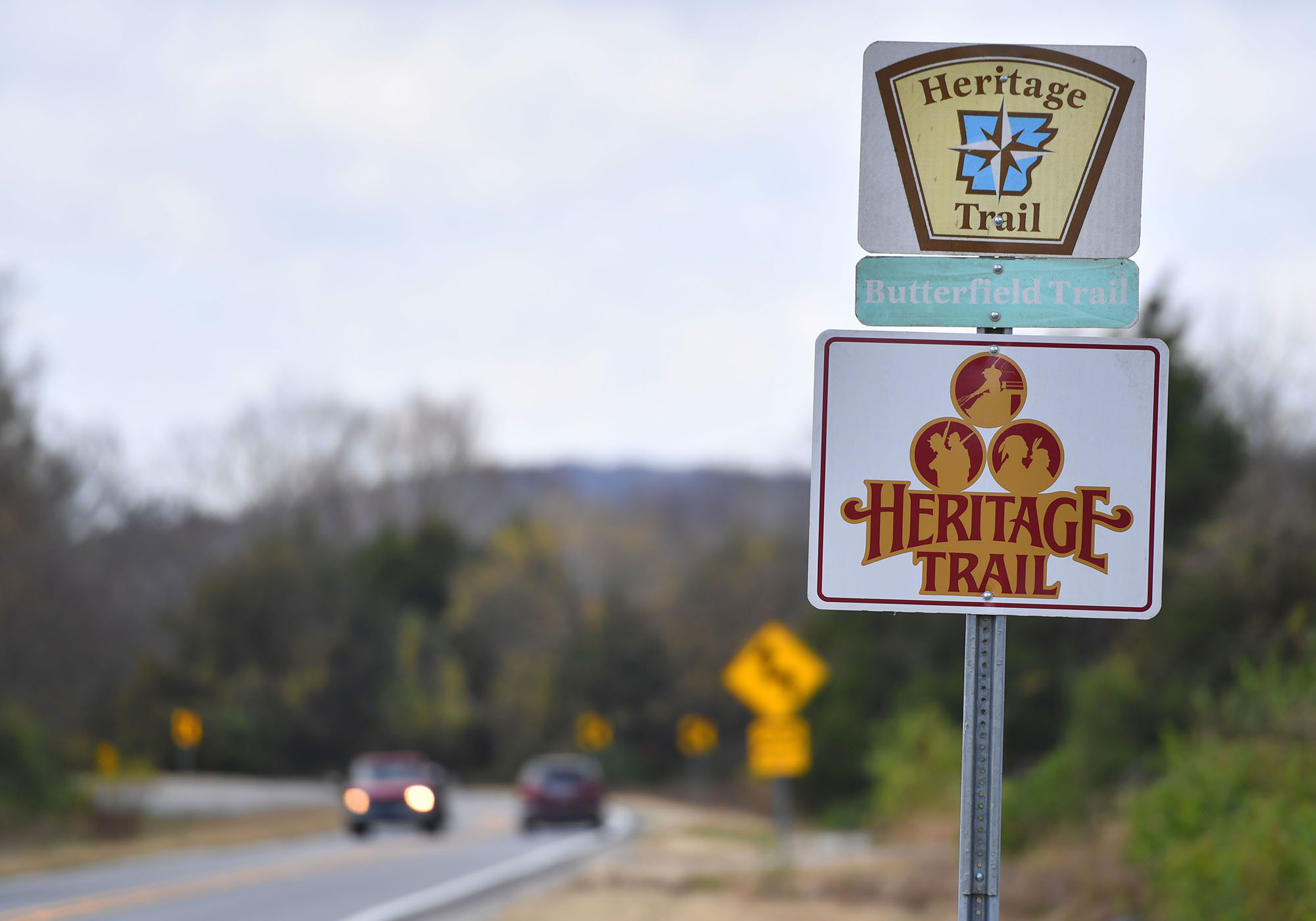