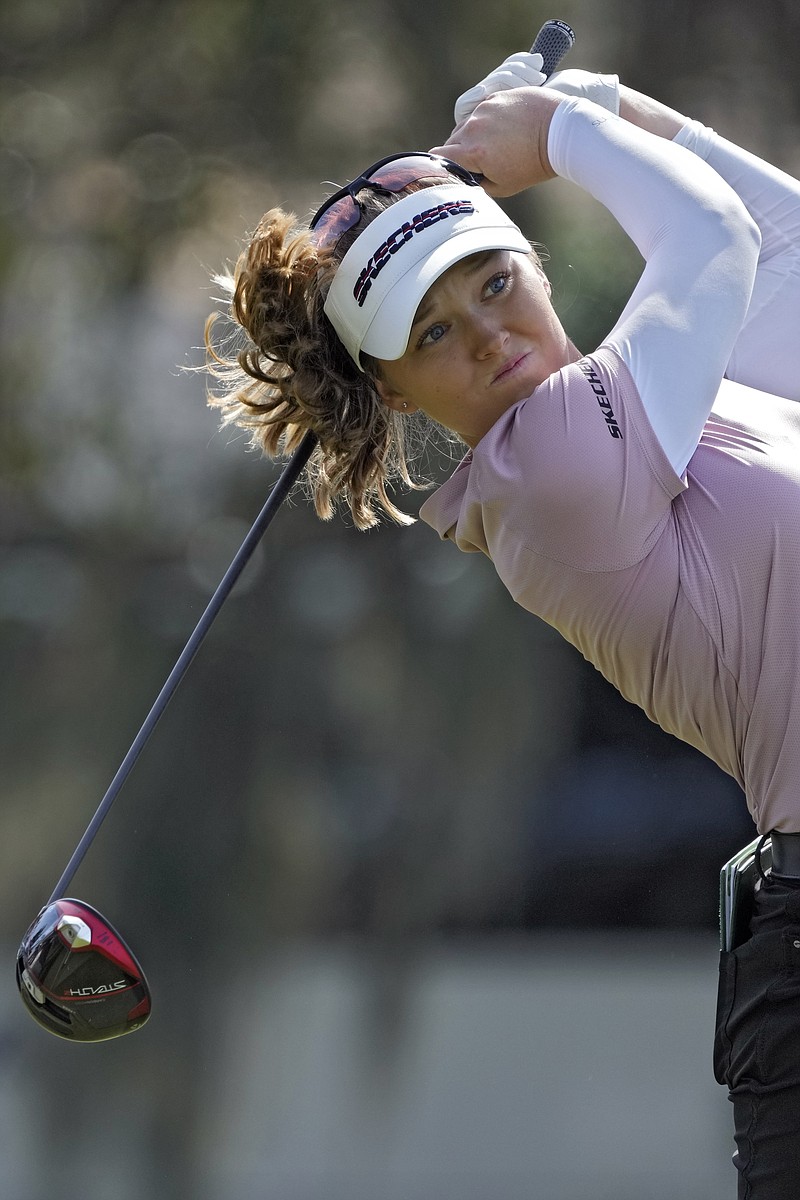 Brooke Henderson tees off on the ninth hole during the first round of the Hilton Grand Vacations Tournament of Champions LPGA golf tournament Thursday, Jan. 19, 2023, in Orlando, Fla. (AP Photo/John Raoux)

Sal Bando, a three-time World Series champion with the Oakland Athletics and former Milwaukee Brewers executive, has died. He was 78. According to a statement from his family, Bando died Friday night. The family said the former third baseman lost a battle with cancer that began over five years ago. Bando hit .254 with 242 home runs and 1,039 RBI in 16 seasons with the Athletics and Brewers. The four-time All-Star, who also starred for Arizona State in college, won three consecutive titles with the A's from 1972-74. Bando spent his last five seasons with Milwaukee, playing on the franchise's first winning team in 1978 and its first postseason team in 1981. The Cleveland native joined the Brewers' front office after his playing career. He served as the team's sixth general manager from October 1991 to August 1999.

Reed walks away from job

Pro Football Hall of Fame safety Ed Reed walked away from Bethune-Cookman in tears Saturday following a 15-minute goodbye in front of players and parents. Reed made it clear he wasn't leaving on his own accord. The Ed Reed Foundation announced on social media Saturday that the university declined to ratify Reed's contract and "won't make good on the agreement we had in principle, which had provisions and resources best needed to support the student athletes." The decision came less than a week after Reed ripped the school in a profanity-laced social media post that went viral. He accused Bethune-Cookman of having a dirty campus and failing to clean his office before he arrived. He threatened to leave then, saying he was having to "clear out trash" while not even being under contract. Reed apologized the following day for "my lack of professionalism" and addressed it again Saturday. Reed pointed out some of the good he had already done at Bethune-Cookman, including clearing land for a practice field -- progress that could be seen from Reed's office window.

The WNBA players' union said Saturday it will review Dearica Hamby's complaints about Las Vegas management after the Aces traded the two-time All-Star to the Los Angeles Sparks. In an Instagram post, the 29-year-old Hamby said the Aces attacked her character and work ethic. "Being traded is a part of the business," Hamby posted. "Being lied to, bullied, manipulated, and discriminated against is not." Hamby agreed to a two-year contract extension with Las Vegas in June. She said in her Instagram post that Aces management said she knew she was pregnant at the time of the deal. "This is false," Hamby wrote. "I was told that I was a 'question mark' and that it was said that I said I would 'get pregnant again' and there was a concern for my level of commitment to the team." Hamby spent her first eight WNBA seasons with the same franchise, dating to the Aces' days in San Antonio as the Silver Stars. The 6-3 forward was the sixth overall pick in the 2015 draft. Hamby was the WNBA Sixth Woman of the Year in 2019 and 2020. Hamby averaged 9.3 points and 7.1 rebounds for the Aces last season when they won their first WNBA championship. She was limited in the playoffs due to a knee injury.

Shane Lowry moved into position to win the Abu Dhabi Championship for a second time but the Irishman has plenty of company on a stacked leaderboard. That includes, out of nowhere, his compatriot and fellow major winner Padraig Harrington. Lowry, the 2019 champion, shot 6-under 66 to tie for the third-round lead Saturday with Francesco Molinari and Min Woo Lee at 13-under overall. There were 12 players within three shots of the joint leaders and among them is the 51-year-old Harrington, who shot 64. Lowry, who began the day three shots off the lead, eagled the par-4 sixth when he holed out from the fairway. He added five birdies and one bogey.

Aleksander Aamodt Kilde turned around his Kitzbuehel weekend Saturday, winning the second men's World Cup downhill on the demanding Streif course after overcoming two eventful days in the posh Austrian ski resort. The Norwegian fractured a bone in his right hand during Thursday's training, then needed an acrobatic recovery in the race the next day to escape a fall near the end of his run, which he called "scary." But racing under low clouds and in light snowfall on Saturday, he sped down the 3.3-kilometer course with no apparent mistakes, winning the storied race for the second time in his career. Attended by 45,000 spectators, including high-profile guests from politics, society, and sport, the downhill on the Streif is the World Cup race with the highest prize money, paying $109,000 to the winner.

An exercise rider at a Florida horse track died Saturday in a training accident, officials said. Tampa Bay Downs said 19-year-old Daniel Quintero was fatally injured while working with horses before 7 a.m., but declined to give further details. Hillsborough County sheriff's spokesman Marco Villarreal said detectives are investigating the death, but it does not appear foul play was involved. Track announcer Jason Beem told The Tampa Bay Times that Quintero was killed in an accident involving two horses. He told the newspaper that the horses were not hurt. 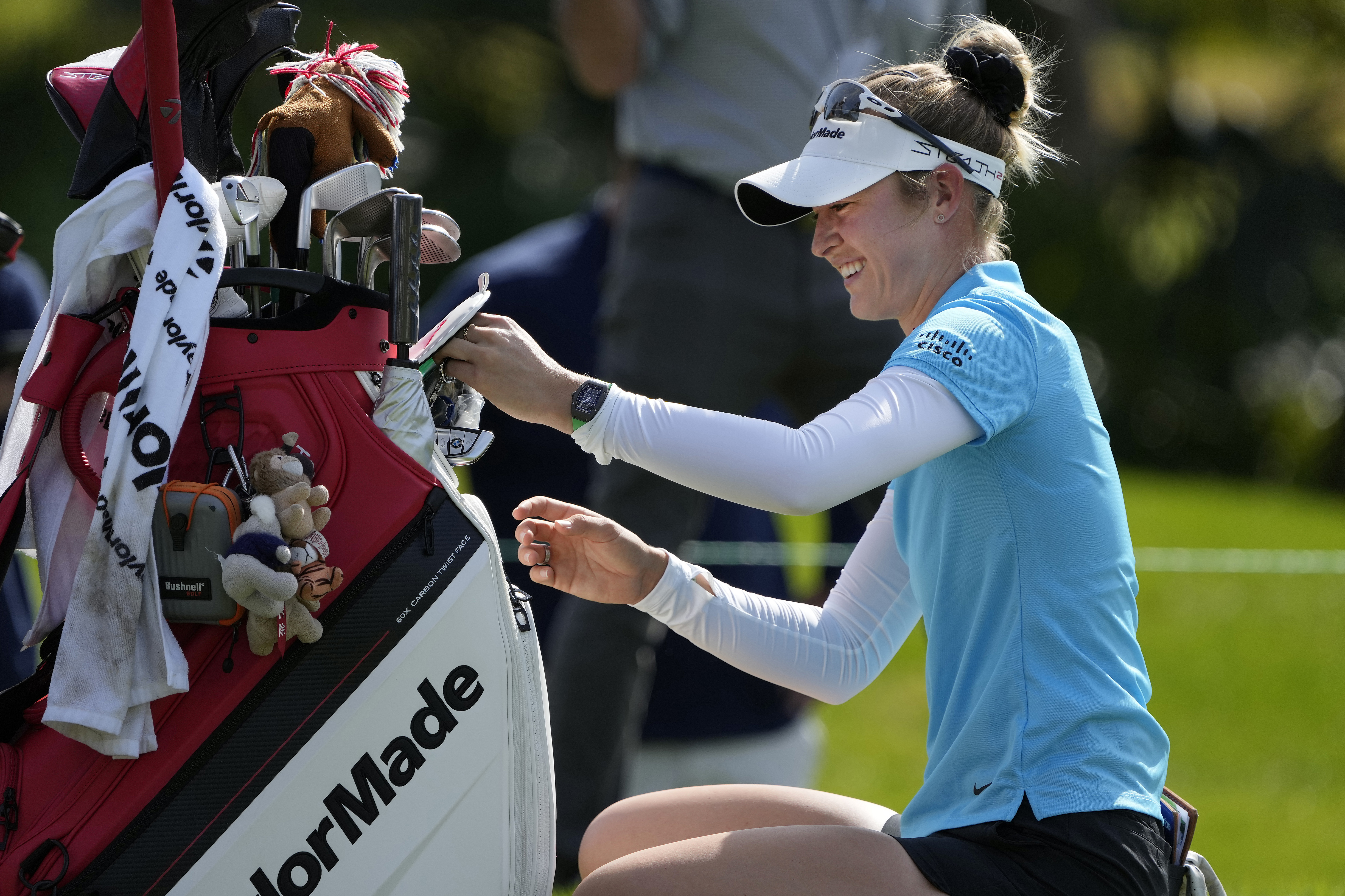 Nelly Korda reaches into her golf bag while waiting to tee off on the 10th hole during the first round of the Hilton Grand Vacations Tournament of Champions LPGA golf tournament Thursday, Jan. 19, 2023, in Orlando, Fla. (AP Photo/John Raoux) 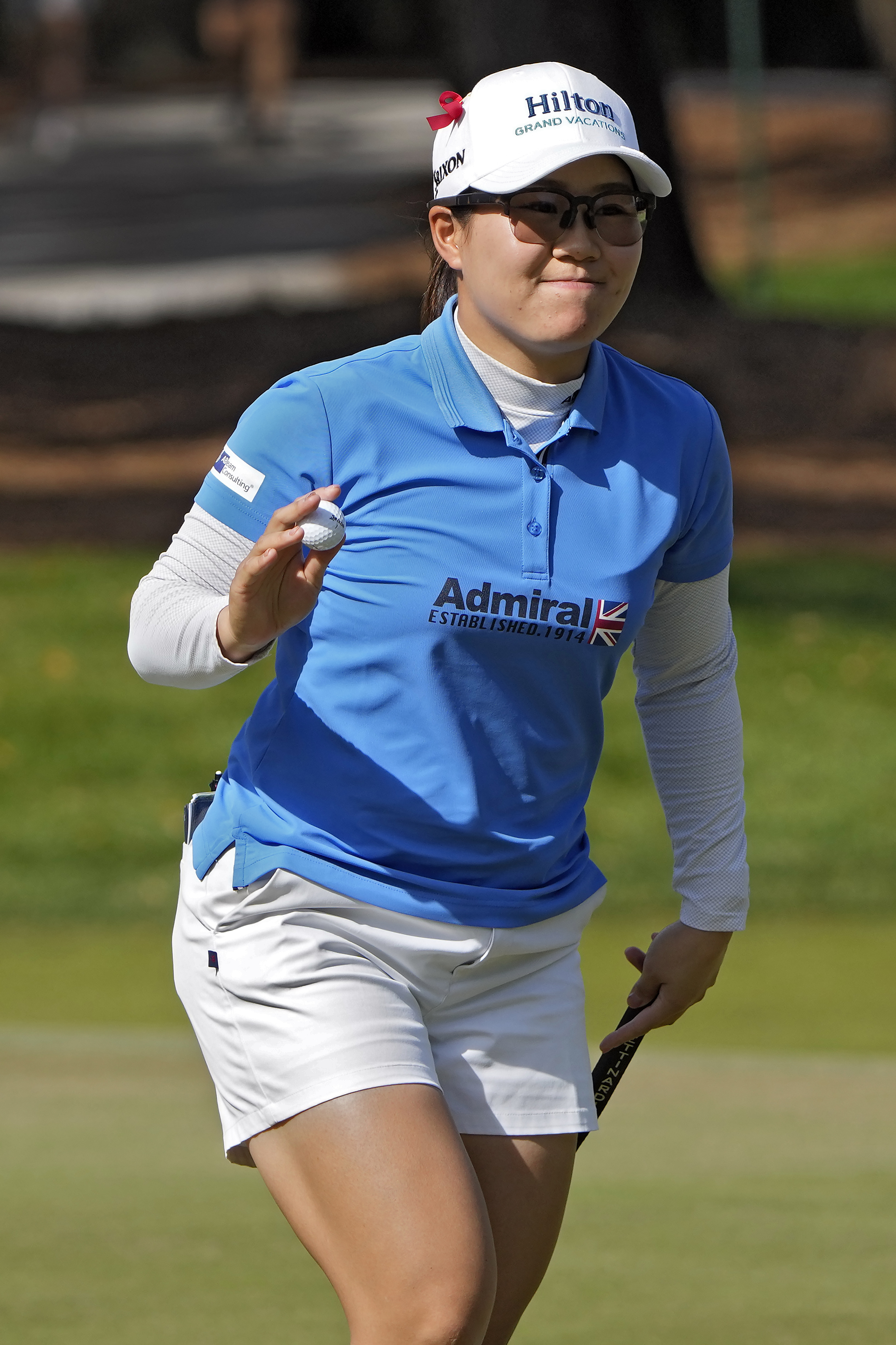 Nasa Hataoka, of Japan, holds up her golf ball after making a birdie putt on the 10th hole during the first round of the Hilton Grand Vacations Tournament of Champions LPGA golf tournament Thursday, Jan. 19, 2023, in Orlando, Fla. (AP Photo/John Raoux)