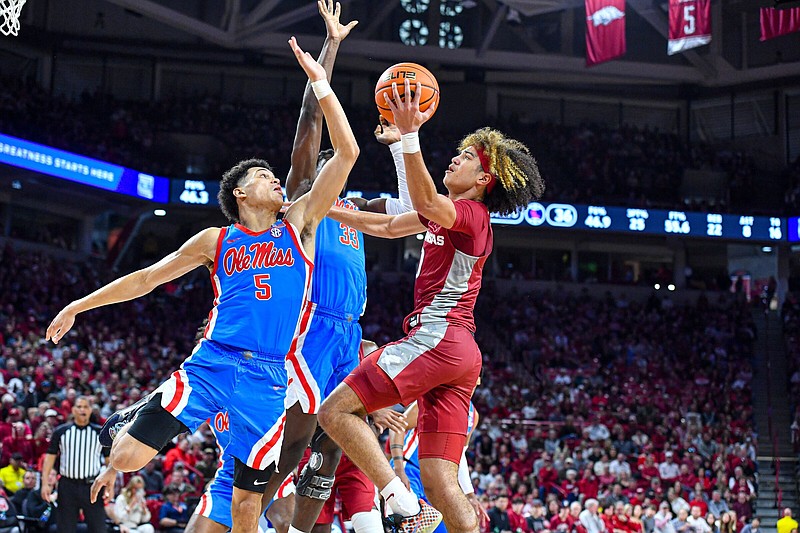 FAYETTEVILLE -- It had been a while since the University of Arkansas men's basketball team got to celebrate a victory.

The No. 25 Razorbacks beat Ole Miss 69-57 in Walton Arena on Saturday for their first victory since Jan. 4 when they beat Missouri 74-68 at home.

Since then, Arkansas had endured a four-game losing streak.

"I mean, we're happy," Razorbacks Coach Eric Musselman said. "We'll have a good dinner tonight with family and friends. It's a little bit better than the alternative."

"It felt good, just knowing both teams are in desperation mode for needing a win," Razorbacks junior guard Davonte Davis said. "Of course we're playing at home, which gives us a little more confidence boost."

Musselman had a football-themed message for his players.

"Like Coach Muss told us, every game from now on is our Super Bowl, so we went in treating it like that," Arkansas freshman forward Jordan Walsh said. "You know how fun it is to win a Super Bowl and watch people celebrate after the game.

Arkansas couldn't hold 10-point leads in the second half of its previous two games in losing at Vanderbilt and Missouri, but Saturday was a different story.

"It was just like being relentless on defense," Walsh said. "Always pursuing the ball and pursuing rebounds, trying to get steals.

"That's our identity and we're trying to get back to that now, because we've kind of lost ourselves a little bit in these last couple of weeks.

"This is who we are. We're just trying to get back to it. This was the first game that showed that this is who Arkansas is and we're going to be like this for a while."

Ole Miss had 17 turnovers, including 12 steals by the Razorbacks.

"Five steals to me is as impressive as anything he did," Musselman said.

"He's great at seeing the game, making reads, attacking the rim," Walsh said of Black. "He's really locked in with Muss, too, so he always knows what Muss is thinking."

Davis had 16 points, 5 rebounds and 4 assists and Walsh had 13 points and 7 rebounds while playing all 40 minutes.

Arkansas freshman guard Joseph Pinion matched his season-high with 13 points off the bench. He hit 5 of 10 shots, including 3 of 6 three-pointers.

Pinion hit back-to-back three-pointers in the final 1:45 of the first half to give Arkansas a 32-29 halftime lead.

After nine lead changes in the first half, the Razorbacks stayed ahead the entire second half.

"I thought [Pinion] coming in and catching and shooting it kind of flipped the game a little bit," Ole Miss Coach Kermit Davis said.

"Just make sure to continue to play hard," Davonte Davis said of the Razorbacks maintaining their defensive intensity. "As we continue to get steals, that means we get fast-break points, which is what we want.

"As we continue to crank it up on defense, everything else will fall into place."

"Our guard play was not great today," Kermit Davis said. "You can't give Arkansas some live-ball turnovers.

"We competed hard enough in the first little bit, but the second half, we couldn't get anything going offensively.

"You have to expect Arkansas is going to score some points a little bit and we couldn't match scores or get any kind of rhythm offensively. ...Too many turnovers and not enough poise on the road."

Murrell came into the game averaging 15.6 points but was held to 3 points on 1-of-5 shooting in 24 minutes. He suffered a leg injury with 14:13 left and didn't return.

Daeshun Ruffin and Jayveous McKinnis each scored 10 points to lead the Rebels.

Arkansas hit 9 of 17 free throws, but the Rebels were 6 of 13 after the Razorbacks' previous three opponents -- Alabama, Vanderbilt and Missouri -- combined for 112 attempts.

"It's a big emphasis just to stop fouling, because you're giving people 40 free throws," Walsh said. "You can't expect to win like that.

"So it was a big emphasis from Muss, and everybody else in the program was talking about it. So I'm glad that we got to execute that this game."

KEY STAT The Razorbacks hit 5 of 9 three-pointers in the second half.