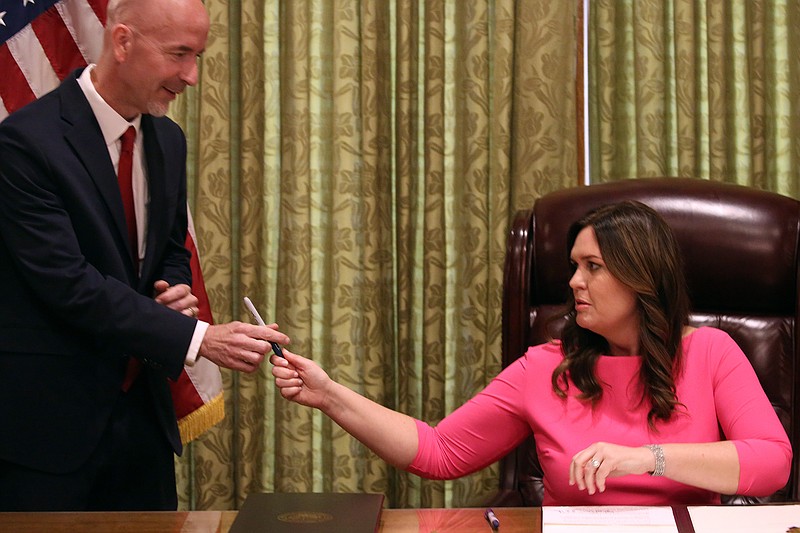 Gov. Sarah Huckabee Sanders hands a pen to Education Secretary Jacob Oliva after signing one of her first executive orders on Tuesday, Jan. 10, 2023, at the state Capitol in Little Rock. More photos at arkansasonline.com/111Sanders/.(Arkansas Democrat-Gazette/Thomas Metthe)

As one of her first acts as the state's chief executive, Gov. Sarah Huckabee Sanders signed an executive order banning what she called "indoctrination" in schools.

Sanders said the executive order takes aim at critical race theory, a concept that has different meanings to people across the political spectrum. The governor, and fellow Republicans, said critical race theory is a form of indoctrination that should be done away with.

The executive order Sanders signed Jan. 10, her first day in office, defines "prohibited indoctrination" as "No communication by a public-school employee, public school representative, or guest speaker shall compel a person to adopt, affirm or profess an idea in violation of Title IV and Title VI of the Civil Rights Act of 1964."

"This executive order directs the secretary to review the rules, regulations, policies, materials, and communications of the Department of Education to identify any items that may promote teaching that would indoctrinate students," Sanders spokeswoman Alexa Henning said in a statement. "Government policies must empower parents to make decisions for their children and foster curriculum transparency in classrooms across the state."

Critics of the executive order said they are worried Sanders and opponents of critical race theory want to prohibit discussion of teaching the legacy of racism in America rather than prohibit some sort of indoctrination.

For proponents of critical race theory, the idea is "an academic and legal framework that denotes that systemic racism is part of American society -- from education and housing to employment and healthcare," according to the National Association for the Advancement of Colored People Legal Defense Fund.

"Teachers are not teaching history to make people revolt or cause discrimination against one race or another, we are literally just teaching the facts," said Kristy Mosby, president of the Little Rock Education Association.

"I would like to see the evidence that it is actually being taught in public schools," said state Rep. Tara Shephard, D-Little Rock. "Most of that is taught on the college level."

The executive order does not prevent schools from teaching about racism, saying it should not be "construed to prohibit the discussion of ideas and history" or "the discussion of public policy issues of the day and related ideas that individuals may find unwelcome, disagreeable or offensive."

The debate over critical race theory isn't a new one in Arkansas. In 2021, Republican state Rep. Mark Lowery sponsored a bill that would have prevented schools from teaching "that any race or ethnicity should feel guilt or shame because of their race or ethnicity" and "that the United States, as a nation, is systemically racist." The bill died in committee.

In response to questions from Lowery, then-Attorney General Leslie Rutledge said "with certain qualifications" critical race theory could be illegal if it led to racial discrimination already banned under federal and state law.

When asked whether the attorney general's office has taken legal action in the past five years against any school that implemented illegal critical race theory practices, Attorney General Tim Griffin said in a statement "we are not aware of any such cases."

"I stand by the legal conclusions in my predecessor's opinion, but it is important to clarify what those conclusions are," said Griffin, a Republican. "The teaching of critical race theory is not currently prohibited by Arkansas law. However, racially discriminatory policies based on the tenets of critical race theory may violate our race-blind laws, including our state and federal constitutions and civil rights statutes."

House Speaker Matthew Shepherd, R-El Dorado, he's heard complaints about critical race theory but has no "personal knowledge" that it is being taught in schools.

"I have had a number of people express those concerns because of experiences their children, their families, have experienced," Shepherd said.

"This is a real problem, I have sympathy for where Huckabee Sanders is going, but I worry parts of it may go too far," Maranto said. "The best antidote to bad ideas is better ideas, so why don't we do a better job of teaching the history of the U.S.?"

Maranto, whose teaching interests include the politics of education, said the executive order may be a shrewd move by Sanders, noting how Florida Gov. Ron DeSantis made his own stand against critical race theory and won reelection in a landslide in November.

"Republicans think this is a winning issue," Muranto said, "and an awful lot of Democrats agree with them or at least are neutral."