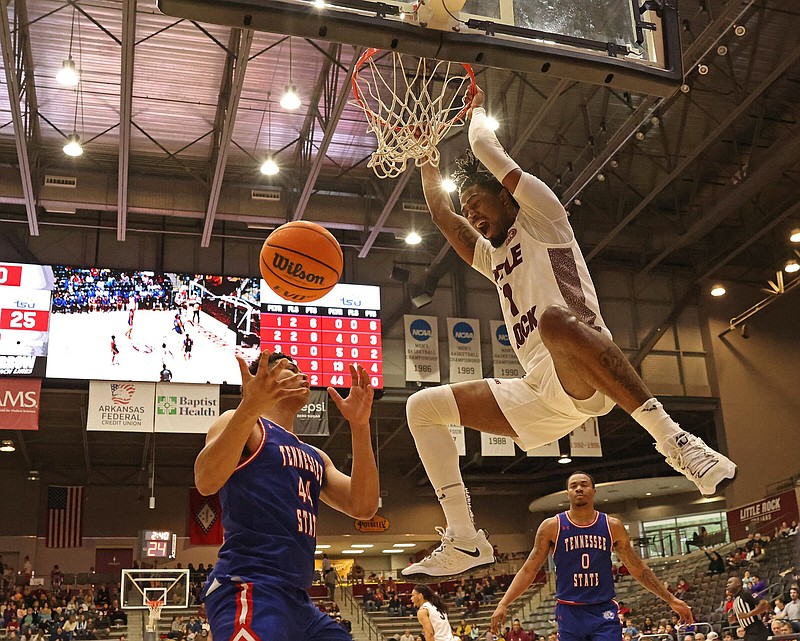 UALR forward DeAntoni Gordon (right) dunks the basketball in front of Tennessee State forward David Acosta on Saturday during the Trojans’ 89-77 victory over the Tigers at the Jack Stephens Center in Little Rock. More photos at arkansasonline.com/122mensbball/. (Arkansas Democrat-Gazette/Colin Murphey)

For a few minutes Saturday, it looked like things might crumble once more for the University of Arkansas-Little Rock men's basketball team.

The Trojans' advantage -- which had been in double digits for the entirety of the second half to that point and as large as 21 points -- was sliced to nine.

Tennessee State, on an 18-6 run over a little more than two minutes, had all the momentum.

But the Trojans never let the Tigers get any closer down the stretch at the Jack Stephens Center, holding off Tennessee State for an 89-77 victory to end a six-game losing streak.

C.J. White led the Trojans with a career-high 21 points, but he was one of four players in double figures for UALR. D.J. Smith added 20 to go along with DeAntoni Gordon's 14 and Ante Beljan's 12.

"We had this happen to us before when we played Lindenwood," White said of stopping the Tigers' late push. "We knew what to do ... and we knew that we had to stay poised and just keep playing."

As big a reason as any that the Trojans were able to be in control of things for much of the day was the fact that they hit shots.

Some of that was a product of the Trojans' defense. They turned stops into offense, finishing with 29 fast-break points.

"It was a pretty good game," UALR Coach Darrell Walker said. "I was happy with the way my guys played and responded."

Although Myron Gardner returned from an illness that sidelined him Thursday night versus Tennessee Tech, the Trojans' leading scorer came off the bench against Tennessee State (11-10, 3-5).

White, who'd replaced Gardner two days ago, again got the start and not only set a personal best but scored double-figure points for just the fourth time this season.

For much of the season, UALR has relied on a pair of sophomore guards in Smith and Jordan Jefferson.

But White made his case to remain one of Walker's first, even if Gardner returns to the starting lineup this week.

"Whatever I'm needed for," White said when asked what he's tried to give the Trojans. "Leadership, making plays, scoring, rebounding, trying to hold their best player ... whatever [Coach] asks me to do."