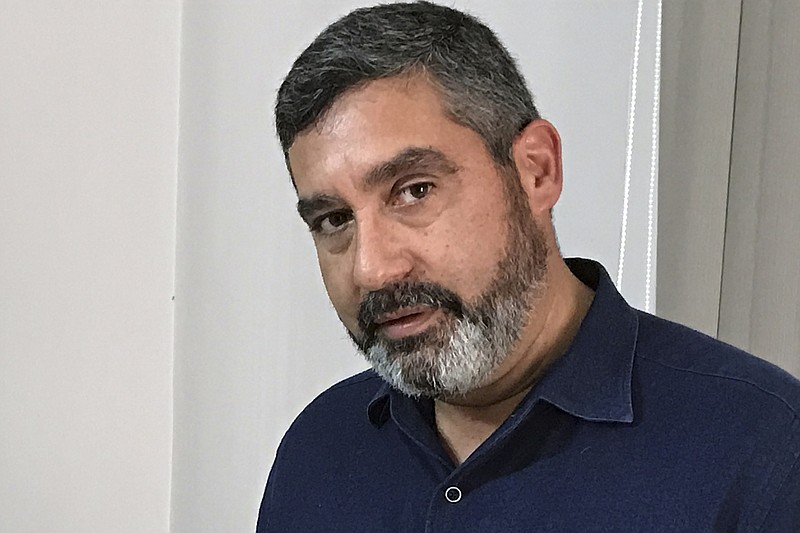 FILE - In this April 26, 2017 photo, former Venezuelan Interior Minister Miguel Rodriguez Torres poses for a photo during an interview at his office in Caracas, Venezuela. On Saturday, Jan. 21, 2023, Venezuela's government has released Torres, a former spy chief for the late president, Hugo Chávez, and who spent nearly five years in prison for spearheading a movement of disgruntled loyalists that defied the rule of the leftist firebrand's handpicked succesor, Nicolás Maduro. (APPhoto/Joshua Goodman)

MIAMI -- Venezuela's government has freed a former spy leader who spent nearly five years in prison for leading a movement of loyalists to the late leftist President Hugo Chavez in challenging the rule of his handpicked successor, Nicolas Maduro.

Miguel Rodriguez Torres departed his homeland Saturday to live in exile in Spain, according to someone close to Rodriguez Torres who spoke on the condition of anonymity because the release hadn't yet been announced by the Maduro government.

Rodriguez Torres is a former army major general with deep ties inside Venezuela's military, which is the traditional arbiter of the country's political disputes. He cut his teeth as a revolutionary stalwart by partaking in a failed 1992 coup led by Chavez, who was a tank commander at the time.

Never embraced by Maduro's traditionally conservative opponents, who despised him for leading a crackdown on anti-government protests in 2014 while serving as interior minister, Rodriguez Torres nonetheless galvanized a small if combative movement of onetime loyalists.

In March 2018, Rodriguez Torres was arrested by Bolivarian agents while delivering a speech calling for free and fair elections.

He was later convicted of multiple crimes, including treason and leading a barracks rebellion. He never admitted his guilt.

PORT-AU-PRINCE, Haiti -- One of Haiti's gangs stormed a key part of the capital, Port-Au-Prince, and battled with police throughout the day, leaving at least three officers dead.

A police patrol was ambushed Friday by armed gang members, Lionel Lazarre, head of the National Union for Haitian Police, said Saturday. The officers called for backup but reinforcements never arrived, he said.

At least three officers died, one was missing and one was treated at a hospital for bullet wounds, police confirmed late Friday.

The United Nations estimates that 60% of Haiti's capital is controlled by gangs, but many residents say gang warfare has expanded past the fringes and into most of the city.

The country has struggled with endemic violence for years, but it came to a head after the 2021 killing of former President Jovenel Moise threw the country into lawlessness.

Powerful gangs have taken advantage of the political chaos and discontent with the current government led by Prime Minister Ariel Henry to further consolidate their control.

The government has failed to control the violence, forcing many to flee their homes and spurring a rise in gang rapes and killings.

Observers expect the bloodshed to get worse, especially after the country's final 10 elected officers ended their Senate terms in early January, leaving the parliament and presidency unfilled because of Haiti's failure to hold elections. Critics say that has turned Haiti into a "de-facto dictatorship."

OUAGADOUGOU, Burkina Faso -- Burkina Faso's army has freed 66 women and children who were abducted earlier this month by Islamic extremists while gathering food in the country's northern Sahel region, according to a state television report Friday.

National broadcaster RTB reported that armed forces had located the hostages during a military operation in the Center-North region. The group included 39 children, with four infants among them.

Authorities have said they had been out in the countryside gathering wild fruit near the town of Arbinda in Soum province when Islamic extremists kidnapped them Jan. 12-13.

Extremists have besieged towns around the West African country, preventing people and goods from moving freely. The town of Arbinda has been under jihadi blockade for years, making women more vulnerable to attacks if they try to leave, rights groups say.

Jihadi violence linked to al-Qaida and the Islamic State group has overrun Burkina Faso, killing thousands and displacing nearly 2 million people in the West African nation. The failure of successive governments to stop the fighting triggered two military coups in 2022.

The military junta that seized power in September is struggling to stem the violence.

The cause of the capsizing wasn't immediately known. The boat was carrying 29 people, 15 of whom were foreigners, and it overturned at the Watamu Marine National Park and Reserve.

Twenty-five people were rescued and some were hospitalized and in stable condition, Malindi sub-county Deputy Police Commander Solomon Odero said. He ruled out speculation that the boat was overloaded.

The nationalities of the foreigners who were involved weren't immediately revealed.