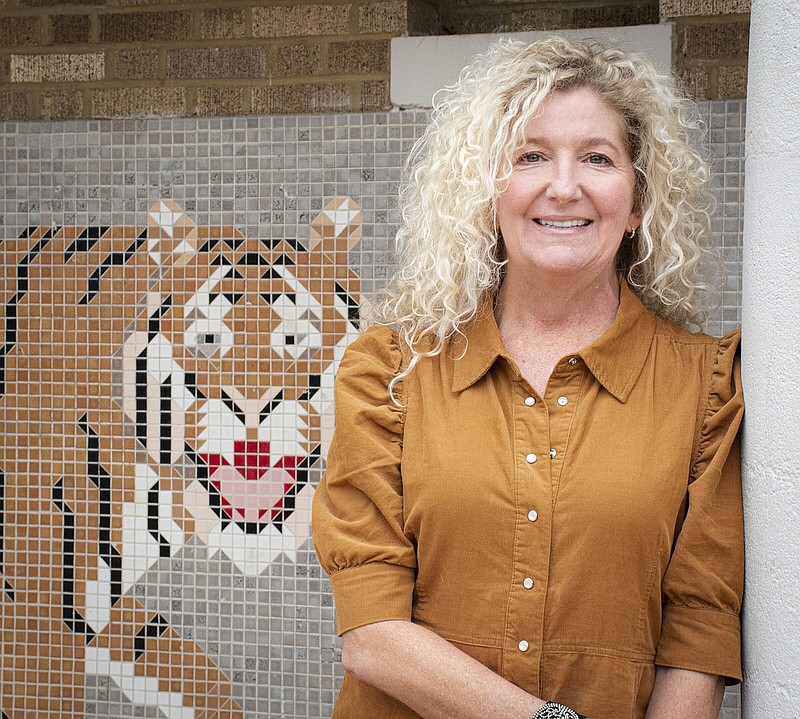 Karen Ryall has volunteered at Little Rock Central High School since 2014. In 2016, she started leading tours of the school for prospective students and in 2020 she won the Jane Mendel Award, the highest award given by Volunteers in Public Schools. (Arkansas Democrat-Gazette/Cary Jenkins)

Little Rock Central High School can be an imposing place for a newcomer. The student population, about 2,300, is more than that of many Arkansas towns, and Central has students from 49 countries.

Opened in 1927 and grandly constructed with a combination of collegiate Gothic and art deco architecture, the school is not only huge, it's a landmark of the civil rights movement. Central was the site of the tumultuous 1957 desegregation crisis, when nine Black students, amid bitter protests, desegregated the school under federal protection. Since 1998, the Little Rock Central High School National Historic Site has been a unit of the National Park Service.

So yeah, it can be a lot for a newbie. And that's where Karen Ryall comes in. Ryall is a Central volunteer and provides tours to prospective students and their parents or guardians.

On a cold, cloudy Thursday afternoon Ryall is with her friend and fellow volunteer, Tracie Sugg, in a counselor's room at the school. Dozens of pennants representing colleges attended by former Central students -- Dartmouth, Wellesley, the University of Chicago, Princeton and Yale among them -- hang on the walls.

Ryall has been leading tours for six years.

"It could be a transfer student from another school in the district, but a lot of time it's people who are moving here," Ryall says.

She began volunteering at Central when her oldest daughter, Sophie, entered the school as a freshman in 2014. Sophie graduated in 2018, and Ryall's other two daughters are also Central alumnae -- Lily, Class of 2020 and Mimi, Class of 2022.

Having a parent lead tours of the school, as opposed to a teacher or administrator, is an advantage, Ryall says.

"I think it's nice that a parent can have a one-on-one with a [prospective student's] family. I've had three kids go through here and all three were very successful at Central and they all went on to have great college experiences. I'm grateful for what the school has afforded my children and I want other people to know what a great experience [it is]. I want to share that, and I can talk about the benefits of Central and all the things that we offer."

"Having a parent who had three children attend our school -- all very different -- seems like a really transparent testament to guide parents our way," she says in an email. "It seems to be very effective as most all of the parents who sign up for her tours end up signing up for Tigerland."

Among the statistics Ryall likes to point out to prospective students and families is the dollar amount of scholarships awarded to Central seniors.

"Last year's graduating class had $14.1 million awarded to them," she says. "It's huge. We are a highly recruited school, and academically it's a really strong school."

Ryall, a Realtor with the Janet Jones Company, also likes to make sure newcomers get to see kids go from one class to another after the bell rings.

"When they see a class change and get to be in the hallway and see the kids, it doesn't seem crazy or overwhelming," she says.

A highlight for many visitors is seeing the school's auditorium, Ryall says, adding that she also likes to let them peek into classrooms. The art room is also popular.

"We have an amazing art department," she says.

Ryall started helping with tours in 2016, and took over as Tour Chair in 2017. Leading tours isn't the only thing she has done in her years at Central, however. She was vice president of the Parent Teacher Student Association from 2018-'19 and president in 2019-'20. As president, she helped facilitate the 35-40 different committees of volunteers that help throughout the school. In 2020 she won the Jane Mendel Award, the highest award given by Volunteers in Public Schools, the group that promotes volunteerism in the Little Rock School District. Before she started helping out at Central she volunteered at Pulaski Heights Elementary School and Pulaski Heights Middle School.

Like Ryall, Sugg began volunteering at Central in 2014 when her daughter Devin was a freshman. Sugg's son, Bryce, is a senior this year.

She worked as a volunteer in the school's office, and eventually oversaw the office volunteers. Putting in time in the front office is sort of like a gateway for Central volunteers, she says.

It's a good way to "get to know the school, the teachers, Mrs. Rousseau and the ins and outs of the school. From there, they will usually want to get involved in other committees because they see what a great school it is and how welcoming it is. It's a great way to start."

It's also a great way to involve parents in the school family, Rousseau says.

"Central is a family and certainly, parents are part of that family ... . Parents can assist with tasks in the main office, attendance office and guidance office which allow our staff to address more immediate needs. It is important for students to see our parents helping staff teachers because it sets a tone and climate in the school about the importance of the partnership between the home and our school."

Sugg has also given tours after being trained by Ryall.

"I've done tours and lost my voice a few times," she says. "There's a lot of information to give, and you want people to know all they can about the school where they are going to send their child."

It's hard to say just how many volunteers are at the school, Ryall says, but there are a lot, ranging from those helping office staff to others volunteering with the sports teams and other school groups.

Katharine Adams is a 1988 Central High graduate and this year took over from Sugg in organizing the schedule for office volunteers. Her daughter, Kate, is a Central sophomore.

"Often they have different jobs waiting for them," she notes. "It may be running errands around the school, delivering paperwork, going to classrooms if a student is needed for something. It can be stuffing envelopes or answering the phones. It varies from day to day. The ladies in the office are essential to the running of the school, and volunteers are there to help ease the workload. They are happy to have us there, and I can't sing the praises of Mrs. Rousseau high enough."

Sugg, who has also volunteered on the elementary and junior high levels, says volunteer work helps her be a part of the school.

"I enjoy meeting teachers I haven't met before, and seeing Mrs. Rousseau and how she runs the school -- it makes me remember why I sent my kids here. Another good thing is Karen and I wouldn't be friends right now if we hadn't met through volunteering."

For Adams, being a parent-volunteer is a good way to know more about what's happening at the school.

"It's a way to get your foot in the door at the school and have your finger on the pulse of what happens in the building," she says. "It's also a way to get to know the teachers and the staff. With teenagers, you can only get so much information out of them, so it's nice to be in the school and see what's going on and put faces with the names you hear about."

Being part of the process of introducing people to the school is why Ryall has continued to volunteer even after her children have graduated.

"It's overwhelming to pick a school, and what I get out of it is the satisfaction in helping people choose Central," she says. "I feel good about that."

As for how long she will continue, Ryall says, "for as long as Mrs. Rousseau asks me to do it. I really do enjoy it. I love to let people know the benefits of this school, and I want people to choose Central." 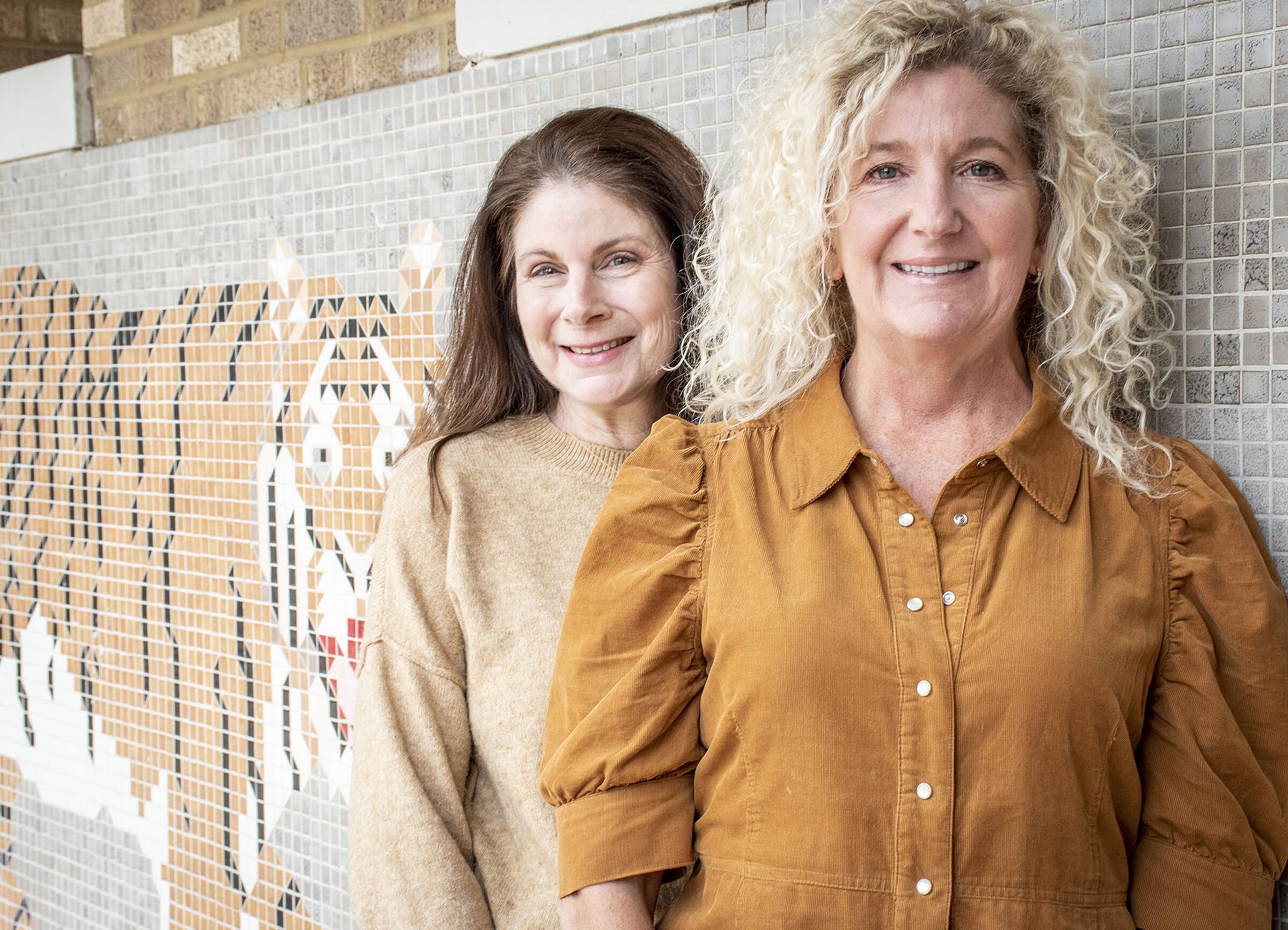