She calls GOP demands ‘irresponsible’ by Compiled by Democrat-Gazette Staff From Wire Reports | January 22, 2023 at 4:42 a.m. 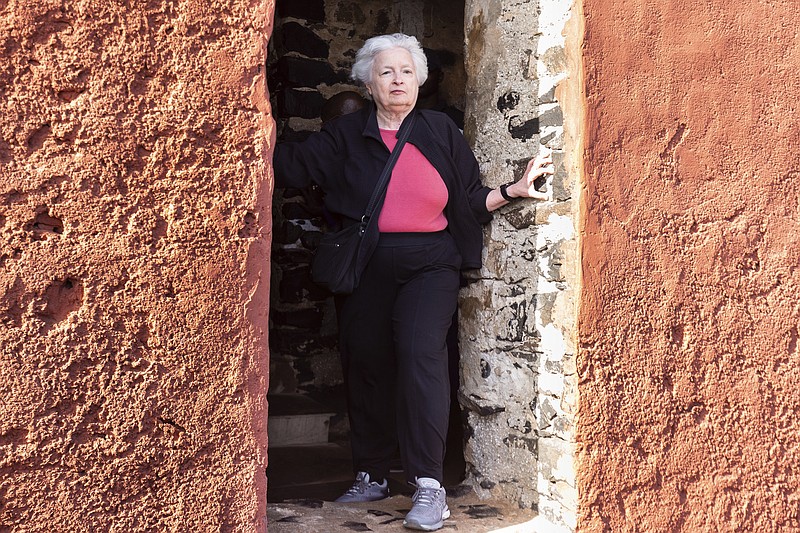 U.S. Treasury Secretary Janet Yellen stands in the "Door Of No Return" on Goree Island, Senegal, Saturday Jan. 21, 2023. Yellen has paid a solemn visit to an island off Senegal that is one of the most recognized symbols of the horrors of the Atlantic slave trade that trapped tens of millions of Africans in bondage. She is in Senegal as part of a 10-day trip aimed at rebuilding economic relationships between the U.S. and Africa. (AP Photo/Stefan Kleinowitz)

DAKAR, Senegal -- Treasury Secretary Janet Yellen said Saturday in an Associated Press interview that she expects Congress will ultimately vote to raise America's debt limit, but demands by House Republicans for spending cuts in return for backing an increase are "a very irresponsible thing to do" and risk creating a "self-imposed calamity" for the global economy.

The Biden administration and Republican lawmakers have been at loggerheads over how to increase the government's legal borrowing capacity. On Thursday, the government bumped up against the $31.38 trillion debt cap, forcing the U.S. Treasury Department to take "extraordinary" accounting steps to keep the government running.

Asked in the interview, conducted during her trip to Africa, about such talk of withholding approval for a higher debt limit unless there are accompanying spending cuts, Yellen called that stance "a very irresponsible thing to do" and said it could have serious consequences even before "the day of reckoning."

"It is possible for markets to become quite concerned about whether or not the U.S. will pay its bills," she said, pointing to the negative economic impacts of a debt showdown in 2011.

As for a potential default, she said, that "would impose a self-imposed calamity in the United States and the world economy." The Treasury Department's extraordinary steps so far mean that the U.S. government should be able to operate until some point in June, when the limit would need to be increased to avoid what could be significant economic damage.

Yellen said she has not spoken with House speaker Kevin McCarthy, R-Calif. McCarthy has yet to spell out the size and target of the spending cuts that he contends are needed to put the federal government on a healthier financial path.

President Joe Biden and administration officials have called for a "clean increase" -- not linked to cuts -- to the borrowing capacity, saying the risks of an extended impasse could lead to a deep recession that would echo dangerously worldwide if faith is lost in the credit of the U.S. government.

"Congress needs to understand that this is about paying bills that have already been incurred by decisions with this and past Congresses and it's not about new spending," Yellen said. She said she believes in making sure that government debt levels are sustainable, "but it can't be negotiated over whether or not we're going to pay our bills."

Despite the dire warnings, Yellen said she believes the situation ultimately will be defused because lawmakers can appreciate the escalating danger if the federal government was unable to pay all of its bills: crashing financial markets, mass firings and an economic downturn that could jeopardize America's place in the world hierarchy.

"I believe, in the end, we will find a way around this," Yellen said.

The treasury secretary said White House and officials from her department "are meeting to discuss possible paths forward. And we will have discussions with members of Congress to try to understand what they see as a path forward."

Biden "looks forward" to meeting with McCarthy to discuss a variety of issues, but negotiation on raising the U.S. debt limit is off the table, the White House said Friday night.

"Like the president has said many times, raising the debt ceiling is not a negotiation; it is an obligation of this country and its leaders to avoid economic chaos," White House press secretary Karine Jean-Pierre said in a statement, which did not provide a date for the meeting.

"Congress has always done it, and the president expects them to do their duty once again. That is not negotiable," Jean-Pierre added.

Earlier Friday, Biden said he would discuss the issue with McCarthy and raise it during his Feb. 7 State of the Union address, warning that a financial "calamity" would occur if the U.S. defaults on its obligations.

"If we don't meet our national debt and renege for the first time, we have a calamity that exceeds anything that's ever happened financially in the United States," Biden said at the White House after a meeting with a bipartisan group of mayors from around the country.

"The debt we're paying on -- and we're going to have a little discussion about that with the new majority leader of the House -- has accumulated over 200 years," the president said.

After Jean-Pierre said at a briefing she had no date to share about a meeting between Biden and the speaker, McCarthy tweeted Friday, "President Biden: I accept your invitation to sit down and discuss a responsible debt ceiling increase to address irresponsible government spending."

Yellen said the administration's position remains to not negotiate over the debt limit, but she did not detail possible strategies being discussed inside the White House to ensure the ceiling is raised.

"Congress has to do it," she said. "It has to be done. It can't be something that's contingent on cuts."

In her statement, Jean-Pierre pointed out that congressional Republicans have discussed cuts in Social Security and Medicare.

"We are going to have a clear debate on two different visions for the country -- one that cuts Social Security and one that protects it -- and the president is happy to discuss that with the speaker," Jean-Pierre said.

In a video released Friday, former President Donald Trump urged fellow Republicans not to "cut a single penny" from the entitlement programs. At the same time, he has been encouraging Republicans to use the debt limit to extract concessions from Democrats.

Yellen sat down for the Saturday interview in the middle of a continent-spanning trip, in which she met with her Chinese counterpart in Switzerland before heading to Senegal, Zambia and South Africa.

The Biden administration is trying to signal its support for improving the economies of African countries, many of which have young populations that will eventually make those nations the drivers of growth in decades to come. At an African nation summit held last month in Washington, Biden said he would visit the continent this year in a sign of the desire to increase engagement with the United States.

America is trying to appeal to African countries on moral terms, saying aid and loans from the U.S. will be transparent and fair in ways that Chinese investments have not been.

Relations between the U.S. and China -- the world's two largest economies -- have taken on an increasingly antagonistic streak amid the geopolitical fallout from China's friendship with Russia, the persistence of the coronavirus and an era of open globalization that has given way to national security priorities.

The past two U.S. presidential administrations have challenged China's trade practices, with the Biden administration limiting the export of advanced computer chips as it simultaneously tries to boost the U.S. sector.

"This is not competition with China -- we want to deepen our engagement with Africa," Yellen said. "We want to make sure that we don't create the same problems that Chinese investment has sometimes created here. That we have transparency, that we have projects that really bring broad-based benefits to the African people and don't leave a legacy of unsustainable debt."

Yellen said she had been struck during her time in Senegal by "a sense of dynamism and optimism among all of the government officials and private-sector people that I've met with." She pointed to female entrepreneurs who received seed money through the Senegalese government.

"There's a kind of vibrancy about the country and a can-do spirit that we saw," Yellen said. "They're coming up with very innovative and original ideas about what they can do to both satisfy local needs and could easily find a global market."

Information for this article was contributed by Fatima Hussein, Josh Boak and Seung Min Kim of The Associated Press and by Josh Wingrove and Justin Sink of Bloomberg News (TNS). 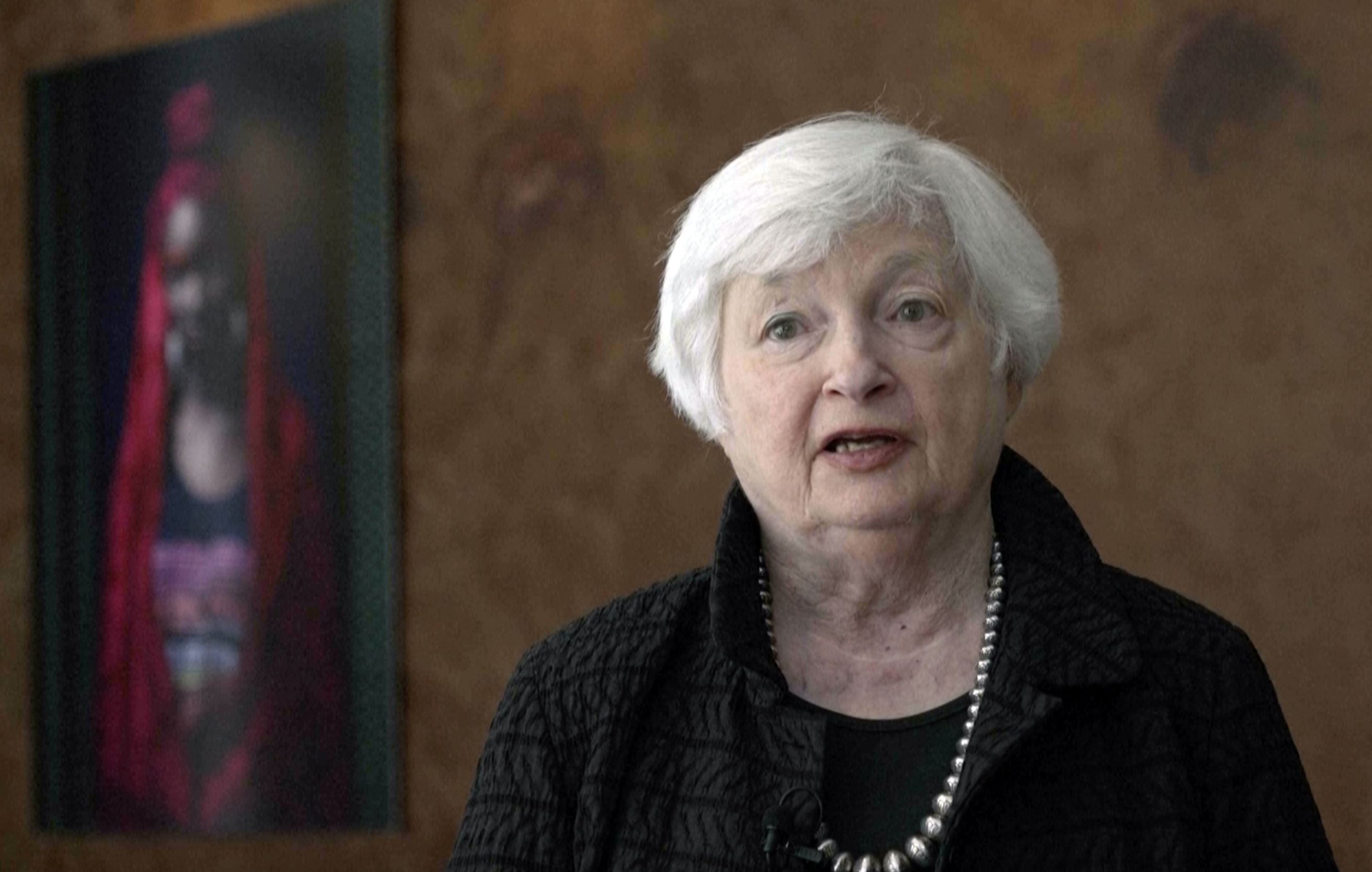 In this image taken from a video, Treasury Secretary Janet Yellen speaks during an interview with The Associated Press on Saturday, Jan. 21, 2023, in Dakar, Senegal. (AP Photo/Yesica Fisch) 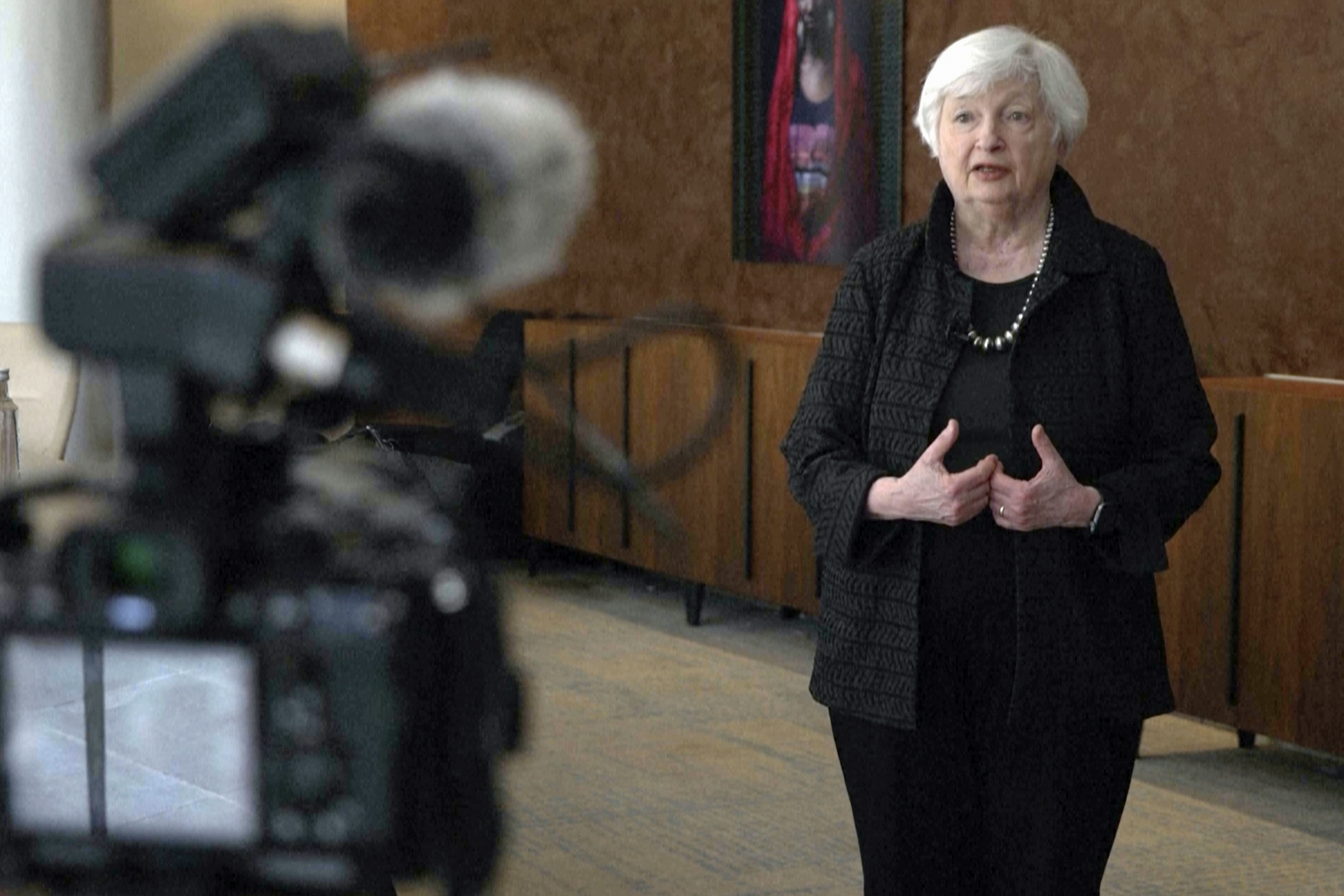 In this image taken from video, Treasury Secretary Janet Yellen speaks during an interview with The Associated Press on Saturday, Jan. 21, 2023, in Dakar, Senegal. (AP Photo/Yesica Fisch)