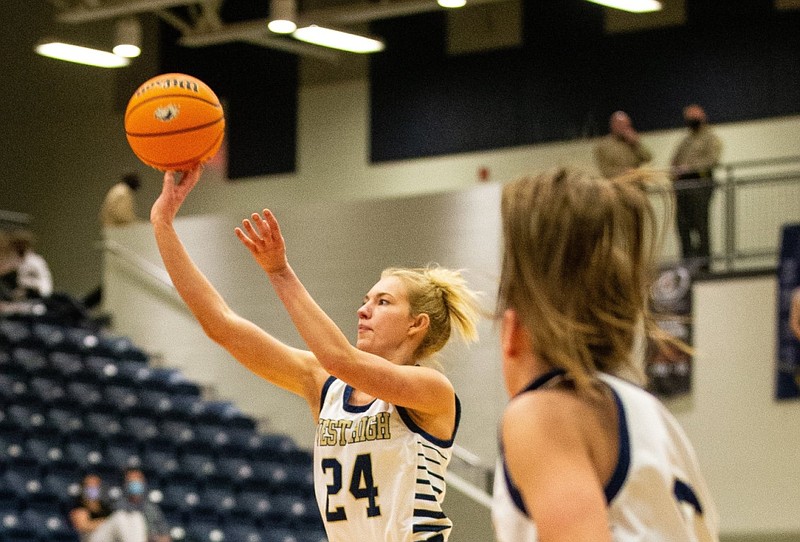 WASHINGTON -- Madison Phillips had options with what to do after high school.

The Bentonville resident was one of the top students in her class at Bentonville West High School and a captain on the girls basketball team. Principal Jonathon Guthrie said Phillips' drive was evident away from campus; she would help organize workout routines in her part-time job, which often involved waking up at 3:30 in the morning.

"It's the leadership," Guthrie said. "It's just that she wants to be a leader."

Phillips, 20, applied to eight institutions during her senior year, to which seven schools offered her admission. Yet one place stood out from the others, and it was Phillips' top choice: the U.S. Military Academy in West Point, N.Y.

Nearly two years after graduating from Bentonville West High School, Phillips isn't just completing her coursework and actively involved in the academy's campus life, she has emerged as a leader in her class, as evident with her ongoing tenure as class president.

"I fit the mold of what a cadet is and what an Army officer is already, and that's what I was wanting to get out of my high school experience," Phillips told the Arkansas Democrat-Gazette. "[It] was to come out with something bigger than myself and for a goal that was beyond what I had already experienced."

Phillips' initial college plans did not involve West Point. She was interested in studying broadcast journalism in a more traditional college setting.

"I knew I wanted to do something more than just normal college. I wasn't quite sure what it was," she said. "I was hoping for a full-ride scholarship, maybe getting a good internship or something. I wanted to make the most of my experience that I could."

During her junior year at Bentonville West High School, Phillips received a pamphlet about West Point and opportunities to learn more about the academy.

"My dad showed it to me," she recalled. "I was originally going to throw it away because, at that time, you get a lot of college letters and stuff. And things I hadn't thought of before I didn't pay attention to because there are so many things to worry about."

Phillips' father encouraged her to consider the opportunity.

Her father knows about serving in the military. As part of the Army Reserves, he was deployed to Iraq and Afghanistan in 2003 and 2011, respectively. "I had grown up around him being in the military, and never once did I ever think I would do something like that," she said.

"Everything that it was saying was things that I had already applied to my life."

Phillips decided to apply to West Point, a lengthy process that involved interviews with academy representatives. Guthrie, whose son attends the academy, said Phillips succeeded during mock interviews by providing insight into her mission of improving herself every day.

"It really does describe the person that she is. She's driven, [and] she's organized," Guthrie said.

Applicants must receive a nomination from either a member of Congress, the vice president, someone connected to the Army or the offspring of certain military members. Phillips' nomination came from U.S. Rep. Steve Womack, R-Ark., who retired from the Army National Guard in 2009 at the rank of colonel. Womack additionally serves as chairman of the West Point Board of Visitors.

"We have a lot of people who apply for academies," the Rogers lawmaker said. "Most of them are highly qualified, some less qualified, and because there are so few selections distributed through members of Congress, it becomes a highly competitive undertaking."

Womack's approach to handling applicants involves interviews to better know their accomplishments, interests and goals with enrolling at a military academy.

When he learned of Phillips, Womack was taken aback by her accomplishments and demonstrated leadership.

"She was highly qualified and among the best-qualified that I've had since I've been in Congress," he said.

Womack named Phillips his principal nominee, meaning West Point had to accept her before any other of Womack's applicants.

"That is not easy because we have a lot of qualified kids," he said. "When we did our evaluation of her, she stood out."

The academy offered Phillips an appointment ahead of her graduation from Bentonville West High School in the spring of 2021. The U.S. Department of Defense Medical Examination Review Board, however, disqualified Phillips because of medication she was taking.

There was still an option for Phillips: take a year of classes at the academy's preparatory school before beginning her freshman year -- referred to as the "plebe year" -- at the main institution. Her first lessons at the preparatory school came during three weeks of initial basic training.

"Not a normal college experience," she said. "You're not starting to figure out your classes yet. You immediately get off the bus and you're getting yelled at. You're being told what to do and you're confused."

Phillips admitted that the first year was challenging because of the adjustments to the preparatory school's culture and schedule, but there was solace in knowing she was not the only person who was confused.

"You're surrounded by so many other people that are doing the same thing as you, and they also have no idea or, if not, they know less than you," she said. "That's -- in a weird way -- comforting to know that there are so many people who have gone through with this and so many people who are going through this with you."

Phillips completed her preparatory school work and began her "plebe year" last August with around 1,200 other cadets. She quickly became part of the academy's extracurricular circles by joining the Sandhurst Black and Gold Team -- a military skills and training group -- West Point's yoga club and Officers' Christian Fellowship, which holds faith-based events at the academy.

When she learned about class officer positions shortly after courses began, Phillips opted to run for vice president. She said she wanted to pursue a leadership opportunity but also maintain a balanced schedule between her courses and other activities.

"I'll just lay low," she said in reflection. "I'll get the leadership experience that I need without having all of the pressure."

Phillips won the vice presidential contest but she did not take that position. The class commandant and other officers disqualified the president-elect from holding office, and none of the other presidential candidates received enough support.

"I had more votes combined than anyone else who had run," she said. "That's how I ended up becoming the president."

Phillips acknowledged that her responsibilities as president are limited because it is her "plebe year," but the position involves representing her class' concerns and hosting some events, including a parent weekend in early March for her classmates.

"Planning for that is definitely going to take up a majority of this first half of my semester," she said.

Phillips is on track to graduate from West Point in May 2026, to which she will be commissioned as a second lieutenant. She is considering taking a career in the logistical branch once she begins active duty, which she will have to do for five years.

Guthrie isn't surprised by Phillips' success so far. He said West Point is the perfect match for someone with her character: a person who wants to lead and make a difference.

"We predicted that she would not only be accepted, but she would succeed," he said. "She would excel no matter what area of life she chose, but we're just so proud of her that she chose to serve her country and to do it this way."