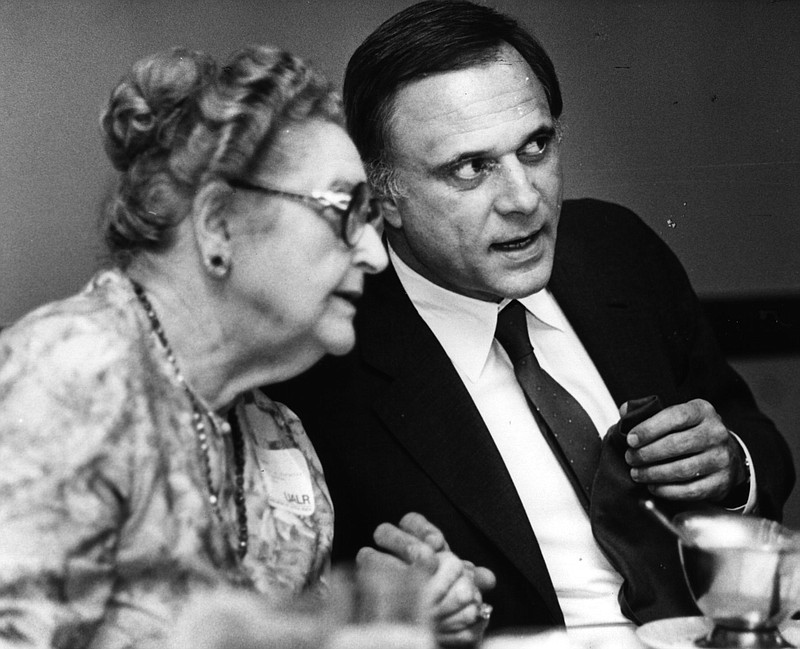 Bessie Grace Boehm Moore was an Arkansas public school educator and advocate for library access throughout Arkansas and the entire United States.

She was born on Aug. 2, 1902, in Owensboro, Ky., to Edgar Boehm, a farmer, and Bessie Calloway Boehm, a homemaker. Her mother died shortly after her birth, so Boehm was taken to live with her aunt in Daviess County, Ky.

Boehm learned to read and write at an early age in the small rural schools she attended. When she was 9 years old, her father remarried and took her to live with him. He soon moved his family to northern Arkansas to settle on the land he had acquired through the Homestead Act.

Boehm attended a school in Mountain View. At the age of 14, she passed the teacher's exam. She was soon hired by the school board to teach at a public school in St. James, Ark.

In 1924, she met Merlin Moore. They got engaged just four days later. In 1926, she accepted a job as supervisor for the Jefferson County Rural Schools in Pine Bluff, where Moore lived. The couple married in September of 1928.

In 1937, Merlin Moore bought a cafeteria in Little Rock. Bessie Moore, in turn, took a position as an elementary school supervisor in North Little Rock. In 1942, she earned a bachelor's degree in education from Arkansas State Teachers College (now known as the University of Central Arkansas). In 1947, her husband became ill, so Bessie joined him in running Moore's Cafeteria. In January 1958, her husband died of a heart attack, and Moore sold the business. The Moores didn't have any children.

After her husband's death, Moore joined the Arkansas Department of Education as supervisor of elementary education. The following year, she received an honorary doctorate of law from the University of Arkansas at Fayetteville.

In 1959, she was the first woman to receive the C.E. Palmer Distinguished Service Award, an award given to the Arkansan with the finest service record in the state for the preceding year. In 1961, she was appointed coordinator of economic education. In this capacity, she worked to implement economic education in school systems throughout Arkansas.

In 1962, she received a master's degree in education from the University of Connecticut in Storrs. She also became the executive director of the newly formed Arkansas State Council of Economic Education. She served in that capacity until 1979. On May 25, 1979, the Center for Economic Education at the University of Arkansas was named the Bessie Boehm Moore Center for Economic Education and dedicated in her honor. During her tenure, more than 85,000 teachers learned to integrate economic and personal finance concepts into curriculum, affecting more than 4 million students.

Throughout her life, Moore was instrumental in extending library services to communities and school systems across the country. In 1926, she helped organize the first county library in Pine Bluff. In 1929, she joined the American Library Association and promoted libraries nationwide. She was appointed to the Arkansas Library Commission board in 1941 and served until 1979. From 1957 to 1959, she served as president of the American Library Trustee Association.

In 1966, she was appointed to the National Advisory Commission on Libraries (now the National Commission on Libraries and Information Science) by President Lyndon Johnson. Due to successive appointments by U.S. presidents Richard Nixon, Jimmy Carter and Ronald Reagan, Moore served in this role until 1988. During that time, more than 50 public and regional libraries were established. In 1980, the American Library Association awarded her its highest honor, an honorary membership.

In August 1992, the Bessie B. Moore Stone County Library in Mountain View opened. It was named in recognition of Moore's $100,000 contribution, which started the fundraising drive. In January 2010, when the Arkansas State Library moved to 900 W. Capitol Ave. in Little Rock, the largest meeting room was named the Bessie B. Moore Conference Room.

Moore died on October 24, 1995, in Little Rock. She was buried in Graceland Cemetery in Pine Bluff.