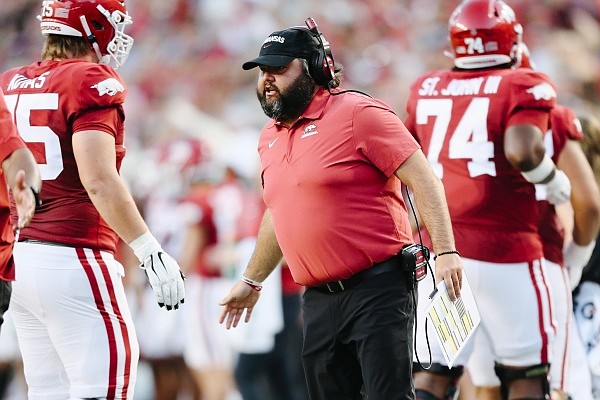 Arkansas offensive line coach Cody Kennedy congratulates players as they walk off the field following a score, Saturday, September 17, 2022 during the second quarter of a football game at Donald W. Reynolds Razorback Stadium in Fayetteville.

Class of 2026 offensive lineman Cody Taylor raved about his visit to Arkansas on Saturday.

Taylor, 6-4 and 273 pounds, of Greenwood has offers from Ole Miss and Kentucky, and is drawing interest from Arkansas, Penn State, Michigan State and North Carolina State.

“I enjoyed hearing a presentation from all the coaches on why Arkansas is a great place to go to school and compete in the SEC,” Taylor said. “During that presentation we were able to hear from a few players — two who started just this week as early enrollees — on how the transition from high school to college had been smooth for them.

“We also heard from those players about the high level of support they receive from the player development team, outside of football, in developing them as great student-athletes and young men.”

Taylor was able to attend his first Razorback game when he and numerous other recruits watched Arkansas' basketball team defeat Ole Miss 69-57 at Bud Walton Arena.

“That was really neat to see," he said. "High energy and a snapshot into what the Razorback fan base looks and feels like."

Spending time with Arkansas offensive line coach Cody Kennedy was another highlight of the trip.

“Arkansas is at the top of my list,” Taylor said. “I really, really like Cody Kennedy. He is a no-nonsense, tell-you-like-it-is coach who holds you to a high standard, just like my high school O-line coach, Austin Moreton, and head coach, Chris Young, at Greenwood. Coach Kennedy is an elite offensive line coach who develops at a very high level. Those who buy into the system and work hard for being the best they can be for themselves and the team are set up under his coaching for future success.”

The photo session when recruits put on the Razorback uniform is often one of the more cherished moments for prospects during visits.

“I am not going to lie, putting on the uniform was a dream come true," he said, "but more importantly, it shows their continued interest in my high school development and belief in my ability to fit into the program and culture in the future. I told my dad in the locker room, 'I love this place.' They hold you in high regards when you are able to put on the uniform, and I am proud of that. I owe all of it to my teammates and my coaches. Without them I would not have been able to be where I am in the recruiting process.”