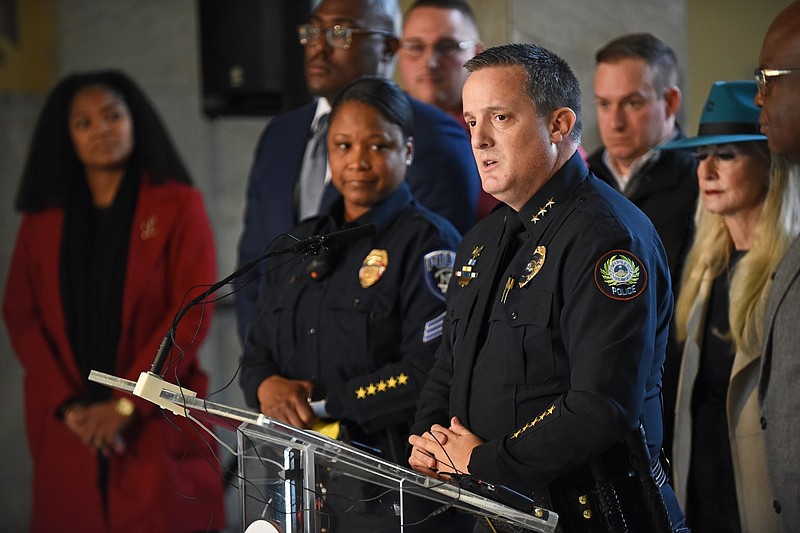 The recently appointed Little Rock police chief intends to realign the department to put more officers on patrol, make better use of surveillance technology to aid in solving crimes and be more present in the community to let the city's residents know that police care about their concerns and input, he said last week.

The process will take time, Chief Heath Helton said in an interview Thursday, as the agency still faces problems with staffing and is overcoming internal conflict that made cooperation difficult in the past.

He took the post during a year when the city recorded 81 homicides, breaking the previous record of 76 in 1993.

As of Saturday, five people had died in homicides in the city so far this year, the same number that had been killed at the same point last year.

Part of the reorganization will address basic needs such as the number of officers -- the department had 86 vacancies as of last week -- and getting more of them on patrol, while changes such as the beefing up of the agency's Real-Time Crime Center with more cameras and engaging meaningfully with community members will be more complex.

Even addressing the staffing issue is a balancing act. More than just hiring new people, it's about making sure they're deployed effectively and also have time to rest and avoid burnout.

In addition to the 86 sworn positions that were vacant as of Thursday, Helton said he expected retirements in the next two weeks to bring the number of vacancies in the department to 91.

In October, a staffing study conducted by the Center for Public Safety Management determined that the department had too few patrol officers and that they were stretched too thin.

The group, which provides guidance to police and fire departments across the country, typically recommends that 60% of a department's sworn officers be placed on patrol. Only about 43% of the department's officers were assigned to patrol when the group presented its findings in October.

On top of that, the group noted that Little Rock's patrol officers had one of the highest workloads the advisors had ever seen, with almost no time for community engagement or breaks between responding to calls.

Among their recommendations was that the department try to "civilianize" roles that did not require a sworn officer, allowing more officers to be placed on patrol.

Helton intends to work toward the 60/40 ratio recommended by the study, he said, through a combination of hiring new officers and swapping the roles of others.

Already, some civilian employees are starting to help as investigators in the Major Crimes Division, working on assignments such as sex offender notifications and other low-level investigations to free up sworn investigators, Helton said.

Another place where civilians are taking over is in conducting background checks into new hires, Helton said. The advisors who conducted the staffing study remarked that they had never seen a department use sworn officers for these background checks and considered it a waste of resources.

The next recruit class, which will graduate on Friday, has 10 members, Helton said, but the following class, whose members will be hired Feb. 13, boasts 29 new recruits.

"[It's] a little bit of relief, but still a lot of work to do to get people through the door," Helton said.

Another area where Helton hopes to bulk up the department is its squad of homicide detectives.

He hopes that as more officers are recruited, he may be able to reassign investigators from other units to give the homicide detectives a hand.

"It was at a cost to them, because they really worked themselves to death," he said.

In addition to sworn officers, Helton wants to hire two more social workers. The two the department has now, working out of its patrol division headquarters, are seeing a lot of success working with the city's homeless population and helping deal with people suffering from mental illnesses, Helton said.

Both of these groups tend to have more frequent run-ins with police, even if their behavior is not directly hurting other people.

Former Chief Keith Humphrey wanted to hire two more social workers as well, he said in the past.

Eventually, Helton would like to combine the skills of the social workers with officers who have done well in the agency's conflict intervention training program, to create what he calls behavioral response teams.

These groups would take over from patrol officers in cases where the incident involved a mental health crisis. Helton said that these teams would most likely still defer to patrol officers if a situation was deemed dangerous, but suggested they would be taking a more active role than the social workers have in the past years.

Helton pitched the reorganization as part of a vision all officers can have a part in.

Police officers are sometimes afraid of change, Helton said Thursday during a community meeting at the headquarters of the department's Northwest Patrol Division, but these sorts of changes are inevitable.

In the past, Helton said, attempts at change have led to hostility and division.

"We've had some challenges under our recent chiefs," Helton said.

Craig Junginger, one of the advisors on the staffing study, described to the city board in October how odd it was to visit with the department's command staff as part of his work during 2021 and find them hardly on speaking terms.

"You'd have members of the command staff turning their backs to others and not even talking to them," Junginger told the board. "I think that's probably much better now."

As someone who was a part of that command staff, Helton said the antidote has been working on communication, showing respect and making sure officers feel they can be a part of the decision-making process.

He thinks the fact that he rose from the ranks will help him reorganize the department because his officers know he understands the working conditions they are in and the concerns they have.

Currently, he said, the technological command center located at the department's headquarters has access to between 150 and 160 surveillance cameras around Little Rock, most of them city-owned. He considers the center about 35% complete.

In the coming weeks, the department will roll out a program it calls ConnectLR, which aims to add more camera perspectives to the center by partnering with businesses and asking residents to register their private cameras.

Residents can tell police the locations of their doorbell and other private cameras without giving unrestricted access to the feed, Helton said. That way, if a crime happens in that area, detectives can contact residents who say they have cameras in the area and request clips that might show suspicious activity.

Helton's goal is to have 4,000 cameras registered with the center by the end of the year, which he thinks is realistic and even on the conservative side.

The center's cameras have already proved incredibly useful in directing police and fire personnel during emergency calls, Helton said. It can be something as simple as letting units en route know that a road is blocked by traffic or as crucial as offering officers a suspect description before they even get to the scene.

Helton also intends to continue and expand efforts at community-centered policing. He's well aware that traditionally, Little Rock's Black residents have a distrust of police, and the city's growing Hispanic population has even worse feelings about officers, Helton said Thursday at the community meeting.

While that gap won't be bridged quickly, Helton hopes that expanding the department's engagement into more areas of the city and holding meetings outside of police stations may help.

For example, the quarterly meetings of the department's Northwest Patrol Division, at the substation on Kanis Road, are usually well-attended. But that's not always the case with meetings at the Southwest and 12th Street divisions, Helton said.

If police could take these community engagement events into other locations, be they event centers, churches, or even parks, they might get to talk to people who wouldn't come to a police station or just aren't aware of the meetings, Helton said.

He hopes these contacts will help people who might otherwise only see officers during an emergency call feel more comfortable around them.

"I think that's key, in order for us to be successful," Helton said.

Since his appointment in January, Helton has received praise from numerous city directors and secured the endorsements of both the Little Rock Fraternal Order of Police and the Little Rock Black Police Officers Association, the department's twin police unions.

Some community members are waiting until they see tangible results. Kathy Wells, president of the Coalition of Little Rock Neighborhoods, said she expects Helton to address longstanding recommendations to improve the department, not just roll out new plans.

She said the department has to address criticism from not just the Center for Public Safety Management staffing study but also from an audit by CNA, a nonprofit research and analysis organization located in Arlington, Va., of the department released a year before -- in October 2021 -- and feedback from Wells and other community members in a workshop that happened earlier still.

While improvements have been made, Wells said, the city has still not appointed an outside monitor to oversee the implementation of the neighborhood group's suggestions as outlined in the audit report.

In November 2021, Humphrey named Helton as the head of a nine-member internal review board to look over the suggestions. No word on their decisions was ever publicly released.

Personal experience and the results of the audits suggest that the department still has issues with staff levels, aging or lacking equipment, nepotism and sexism in the ranks to address, Wells said.

Helton agreed to meet with members of the coalition to address these concerns Feb. 11, Wells said.

Benny Johnson, a community activist and founder of Arkansas Stop the Violence, wants to see more progress with how the department interacts with members of the community. Like Helton, he acknowledged the wariness some of the city's residents feel toward police.

"You can't mistreat a person and then come back and want to get information from them," Johnson said.

Johnson would still like to see more officers living in the city, and doesn't understand how that isn't a requirement. He knows some of the city's officers live as far away as Greenbrier, with many others living in Benton and Bryant.

"When you're a resident, you have more concern," Johnson said.

Helton has in the past stated that he and his family live in Little Rock. In addition, the city does offer a one-time $5,000 bonus to officers who move to the city, according to the department's hiring site.

Despite his critiques of the department's operations, Johnson said he's glad to see Helton putting in effort to engage with residents, and he's optimistic about the new leadership. He said he's had good experiences with Helton's attending community meetings in the past and showing he cares.

CORRECTION: Kathy Wells, president of the Coalition of Little Rock Neighborhoods, said the Little Rock Police Department has to address criticism from not just a Center for Public Safety Management staffing study released last year but also from an audit by CNA, a nonprofit research and analysis organization located in Arlington, Va., released in October 2021. An earlier version of this article incorrectly specified the entity that conducted the audit released in October 2021.