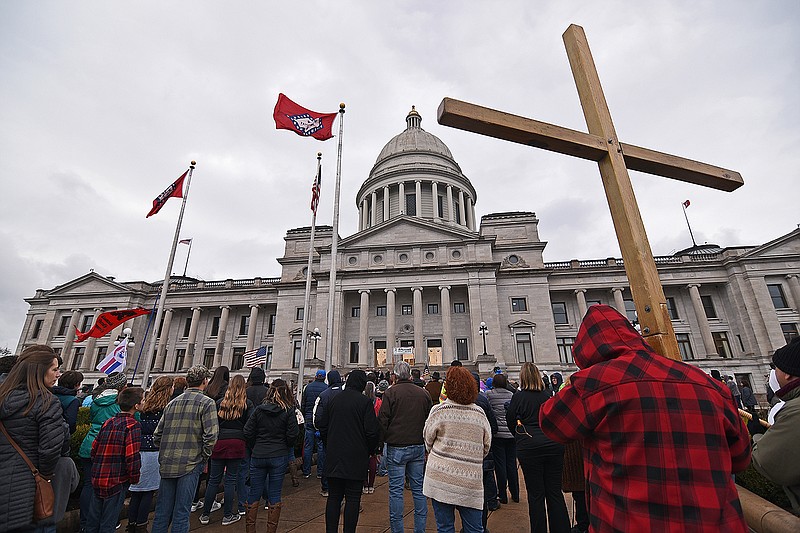 Hundreds gather at the state Capitol for the March For Life on Sunday in Little Rock. See more photos at arkansasonline.com/123march/. (Arkansas Democrat-Gazette/Staci Vandagriff)

It was cold and wet in Central Arkansas on Sunday, but that didn't deter the few hundred people who marched on the state Capitol.

Like similar events held across the country this week, including in Washington, D.C., Sunday saw the annual March for Life.

Unlike in previous years, those marching were doing so in celebration.

This year's marches were the first since the U.S. Supreme Court overturned Roe v. Wade in 2022. Little Rock's march came on the exact 50th anniversary of the case ruling that made abortion legal.

The crowd was filled with anti-abortion signs.

One sign, bearing a picture of a fetus, said "Image of god, not spare parts."

At 2 p.m. the marchers, complete with a four-car -- and one truck -- police escort, made their way from State Street down Capitol Avenue. As they marched, a man played songs on a bagpipe. In the distance, a PA system at the Capitol played "Amazing Grace."

Among those in the crowd was Susanne Lewis of Little Rock.

She held a banner for Deeper Still, a nationwide program with a goal "to bring healing and lasting freedom to abortion wounded hearts through weekend retreats and education."

Lewis said she attended the march to "promote life for the baby and the mother."

As for March for Life, Lewis said she has "tried to come every year for about 25 years."

She's committed to march "because God values life and so do I and I also want to make sure that women that have made the choice to have an abortion that there's forgiveness for that, and healing and restoration."

Also present was Marvin Fisher, of Sherwood, who was dressed up as "Uncle Sam" and carried a large American flag.

Fisher was out "supporting legislation that's happened and we finally got Roe vs. Wade turned over."

The march ended at the steps of the Capitol, where marchers listened to multiple speeches.

"For the first time in 50 years we can say, Roe is no more," declared Andy Mayberry, president of Arkansas Right to Life.

Later, to cheers and hollering, Mayberry said, "Arkansas is abortion-free."

"It's a great day to celebrate this victory of life over death while we gather today on what would have been the 50th anniversary of Roe v. Wade. That decision that unleashed a torrent of death on the unborn children in America. Thank you for standing for life on this day with us. The heart of Arkansas beats for life. We must remain vigilant as our work to protect babies moves to a new frontier. Each and every one of us must make a decision to choose life over death."

Mayberry then turned over the microphone to Governor Sarah Huckabee Sanders.

Sanders noted her parents brought her to a March for Life for the first time roughly 30 years ago.

"I can't think of a lesson that I'm more grateful that they taught me at such an early age that every life matters," Sanders said.

"Every life has value. And we should do everything we can to fight to protect it at every single stage."

Sanders said, "I can assure you, I have a very deep understanding of what life in the womb is and what it means. And as long as I'm Governor over the next eight years, I will make sure that Arkansas continues to be the most pro-life state in the country."

The celebratory mood in Little Rock contrasted with the one held by Emily Wales, president and CEO of Planned Parenthood Great Plains, which covers Arkansas, Kansas, Missouri and Oklahoma.

"A year ago, we marked this anniversary in celebration of a person's right to make their own health care decisions without government interference. Today, our reality is very different," Wales said in a statement.

"We instead join many across our region who are feeling the overwhelming loss of Roe and its impact on patients who cannot access care at home or, too often, cannot get an appointment from providers in our region who are overwhelmed by out-of-state need. Yet, we press on, with a commitment to expanding care and helping as many people as we can in Kansas, and to laying the groundwork to restore rights in our other states."

"We may assume the long arc of history bends towards justice, but we have a duty to grab hold of it and pull it in that direction," Wales said.

"We have worked to do that at Planned Parenthood Great Plains for the past year, by serving as many patients as possible seeking abortion care, fighting intensely to protect access in Kansas, and working to reassure and support all patients in our four states that we are here, and our doors remain open."