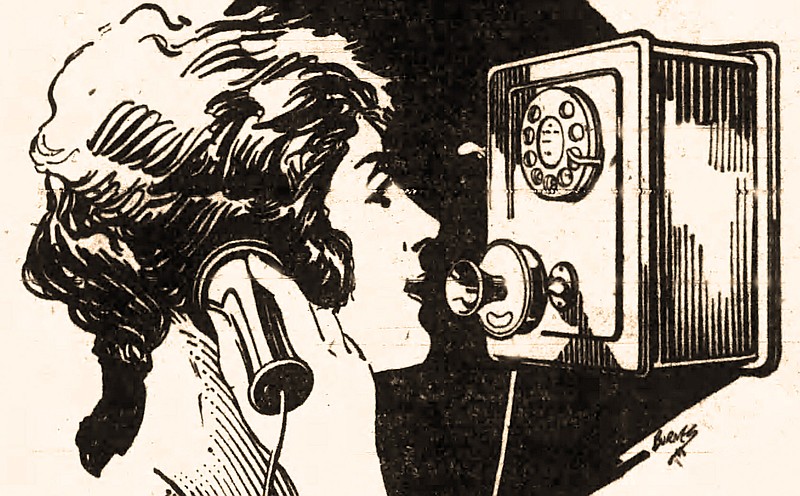 The latest thing in phones from Southwesterm Bell, from the July 23, 1922, Arkansas Gazette. (Democrat-Gazette archives)

Promiscuous firing of pistols and shotguns into the air took out telephone cables. Two hundred customers in Little Rock temporarily lost phone service that way early Jan. 1, 1923, as the Arkansas Democrat reported the next day.

The same thing happened on other holidays, as the phone traffic manager for Little Rock told the Democrat on Jan. 21 that year. James L. Murphy said that he knew to expect celebratory gunfire to knock out 800 to 1,200 telephones a year.

Meanwhile, phone use reliably increased on New Year's, Murphy said. From midnight to 1 o'clock in the morning, practical jokers called their friends to ask, "Is this 1-9-2-3?" And then, when the sleepy friend chewed them out for making careless calls in the middle of the night without looking up the number in the phone book, the pranksters laughed and laughed.

"This," the Democrat reported, "is popularly supposed to be a right clever little stunt, but the telephone company appreciates it less than anyone else. It puts a strain on the service which makes an additional force of operators necessary, and naturally the operators do not find much joy in being called from their beds in the dead of the night for emergency duty.

"But it must be done, for the telephone company is supposed to give service 24 hours a day and must deliver the goods."

Murphy scheduled extra operators for holiday night shifts because trouble was predictable, but so were other behaviors among Little Rock residents.

For instance, he knew that when the General Assembly was in session, phone traffic would jump about 10% over what it had been in January the year before — when all those solons weren't massed in town.

Meanwhile, Murphy also knew that about 10% of the "girl telephone operators" would resign in any given month to get married or for some other reason. And so, months ahead of the legislative opening in January 1923, he had calculated how many "new girls" to hire and train to meet the situation.

A DAY IN THE CITY

Here's how Murphy saw the ebb and flow of Little Rock life, documented through telephone use.

The first calls were made by wholesale produce and meat salesmen, to ask shops and restaurants for the day's orders. By the time they were through, housewives began phoning grocery stores, to order food deliveries.

The volume of business gradually increased until about 10 a.m., when the peak load was reached. The two busiest hours were 9 to 11 a.m. — year-round. "This is the time of day the office man gets to his work and as soon as he has opened his mail, he turns to the telephone," the paper explained. "Also at this time of day there is always a large number of calls from customers of downtown stores making their wants known over the phone."

Traffic jumped at lunchtime as downtown workers called home to ask what their wives wanted brought home. Another increase accompanied the close of business, between 4:30 and 6 p.m. Then came a lull until about 7:30, when social calls poured in — people calling friends to find out where they were going and calling theaters to check showtimes.

Traffic slacked off about 9 p.m. and dwindled until midnight, remaining at a low ebb until the next morning. Overnight calls typically were for emergencies, although drinkers did call up buddies to urge that they get dressed and join the party. "Such calls are a regular nightly occurrence, and the prohibition agents could get some live tips by listening in during small hours of the night," the paper noted.

Murphy scheduled very few operators after midnight: "To make night duty easier, an alarm bell is cut in at midnight. This bell rings whenever a call flashes on the switchboard and makes it unnecessary for the operator to watch the board constantly."

Murphy said long-distance calls peaked in October when cotton brokers began buying from farmers in state and selling to buyers in New York or Boston. Some Little Rock cotton firms typically paid toll charges from $1,500 to $1,800 a month in the fall. (According to the inflation calculator at in2013dollars.com, $1,500 in 1923 had the buying power of $26,034.82 today.)

One high-powered roofing salesman held the record for individual long-distance calls. He visited Little Rock twice a year. A few weeks in advance, he sent in a list of about 150 numbers he intended to call.

"He gives instructions for special telephone line to be installed in a room engaged in advance at the Hotel Marion," the Democrat reported. "When he arrives in the city, he goes to his room, strips for action, generally working in bathrobe or B.V.D.s, and then notifies the long distance operator to 'let 'em come.'"

Murphy added that this salesman was known to every traffic manager in the United States: "At a recent convention of telephone men in Chicago, the salesman was the subject of many anecdotes telling of the wonders he has performed through the use of the long distance phone."

Murphy said that school hours affected traffic: "Turning loose of some 10,000 schoolchildren at the close of the afternoon session causes telephone traffic to take a big jump. It begins to manifest itself within a few minutes after the closing bell has rung. If for some reason the schoolchildren of the city were kept at their desks 15 minutes longer than usual, the girls on the switchboard would know it."

In the past, residents knew they could call the operator to find out where the fire was, but the telephone company had discontinued that "service," the paper said. Still, when there was a big downtown fire at night, the chief operators would call as many adjacent property owners as might be concerned.

Telephone traffic also reacted to conditions, "which one would not expect to have any bearing," the paper noted. "During a thunderstorm, for instance, the usual rate of calls takes a marked drop."

People had "a vague dread of a bolt following the wire into their eardrum."

That sounds like a sensible precaution for an era when all phones were wired, but the Democrat said pooh-pooh:

"As a matter of fact, there is no good reason why people should fear to talk on the telephone during a storm. While there was danger before the days of the lightning arrester, there is absolutely none now, telephone men aver. One may talk with impunity during the most violent storm. Most people know this, but they don't believe it."

Authoritative sources today would disagree with the 1923 Arkansas Democrat. For instance, see arkansasonline.com/0123bolt.

Or ask the federal Centers for Disease Control and Prevention. It states that phones connected to wires are unsafe to use in a thunderstorm. Cellphones and cordless phones are safe, if they are not connected to an outlet through a charger.

"Do not use corded phones" in a thunderstorm, the folks at the CDC urge. And they are dialed in to the ebb and flow of daily life today.