Parts of Arkansas expected to get several inches of snow, forecasters say 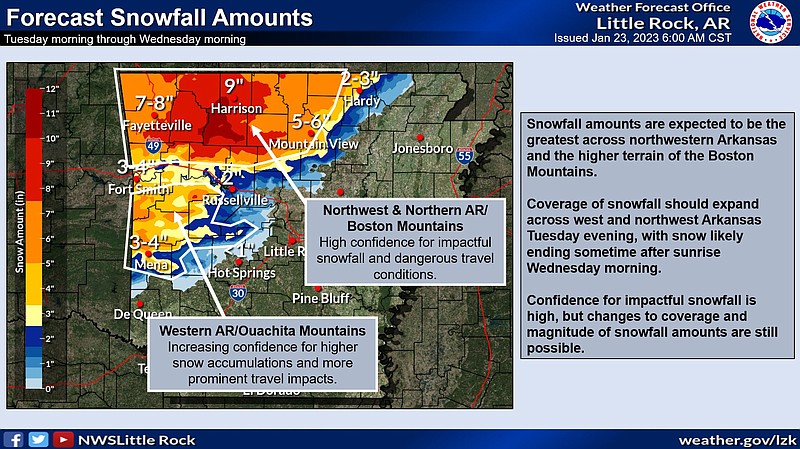 While Pulaski County could see snow that doesn't accumulate and Little Rock could see mostly rain, forecasters with the National Weather Service said snow in west and Northwest Arkansas could have a larger impact on travel Tuesday and Wednesday.

“Wet and heavy snow is expected with this system, leading to rapidly deteriorating road conditions, making travel extremely hazardous across much of northwestern and western Arkansas Tuesday night,” a briefing from the weather service said on Monday.

“Let the snow plows do their job and stay off the roads,” said Travis Shelton, a meteorologist with the weather service in North Little Rock.

However, if travel is impacted in Pulaski County, it will be very temporary, he said. The meteorologist said Pulaski County temperatures will be around 32 degrees, near freezing, but any snow that may fall there is not expected to accumulate.

Shelton said that area is then expected to see temperatures warm to the 40s, “so anything that freezes will melt and it isn’t expected to refreeze.”

A winter storm warning has been issued for much of west, Northwest and north-Central Arkansas from Tuesday afternoon through early Wednesday morning, according to the weather service. A winter weather advisory has also been issued for counties adjacent to the areas covered by the warning.

The weather service's Tulsa office said nearly a foot of snow is possible in the higher terrain of Northwest Arkansas. Their meteorologist, Pete Snyder, said the Fort Smith area could see 3 to 5 inches of snow.

"It will be a heavy, wet snow, but it won't be around for too long,” he said. The Tulsa office has also predicted winds that could reach 20 mph.

The higher terrain of the Boston Mountains could see 8-10 inches or more of snow, according to the national weather service.

Forecasters with the weather service in North Little Rock are predicting anywhere from 4 to 8 inches of snow in north and Northwest Arkansas, Shelton said Monday morning.

Western Arkansas could see 4-6 inches of snow with more that that likely in the higher terrain of the Ouachita Mountains, the weather service said Monday afternoon.

The snow could create “dangerous travel conditions,” briefings from the weather service warned.

Those mountains and parts of western Arkansas could see the rain and snow as early as Tuesday morning, the Monday morning briefing said.

Northern parts of the state could see snow as early as Tuesday afternoon and are expected to see it until early Wednesday, forecasters said.

Ahead of the snow, at least one major utility has been preparing for power outages.

Brandi Hinkle, a spokesperson for Entergy, said on Monday that her team has had many conversations about it. “And we are mobilizing so we will be ready when the weather hits,” she said.

Hinkle said Entergy has been moving crews and equipment to areas where they may be needed.

“We’ve got people up there to help watch for if power lines break from heavy snow, or if the snow breaks tree limbs and they fall and damage power lines,” Hinkle said. “We expect outages, but we are working on making sure we can handle them as best we can.”

Entergy recommends that customers -- in areas expected to see snow -- insulate their doors and windows, collect flashlights and candles and charge devices like cell phones.

“We also recommend that, if you can, stay home. Staying off the roads means that emergency personnel and our crews can get out where they need to be faster and safer,” Hinkle said.

Also preparing for the snow is the Benton County Road Department. The department spent Monday getting equipment in place, said Jay Frasier, administrator of Public Services.

The county won't be able to do much pre-treatment of roads because rain will wash it away, he said, but grit will be put down on bridges if there is not too much rain.

The Arkansas Department of Transportation also has plans in place to prep roadways in Central Arkansas ahead of the storm.

A department spokesperson said it will likely treat high-elevation areas, including bridges and overpasses, in areas northwest of I-30.

The parts of the Arkansas that are not expected to see snow will likely see rain on Tuesday and Wednesday, said Shelton, the North Little Rock meteorologist.

Southern parts of the state can expect an inch to 2 inches of rain, and central and eastern Arkansas could see up to an inch and a quarter of rain, he said.

In Northwest Arkansas, the snow should taper off Wednesday morning, when the high is expected to be 36 degrees, according to the weather service.

Information for this article was contributed by Daniel McFadin of the Arkansas Democrat-Gazette.