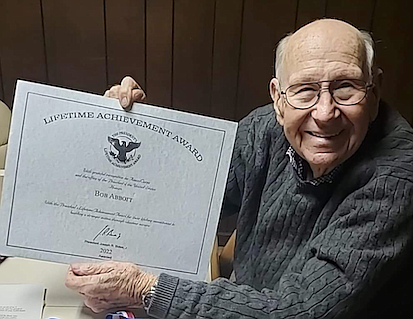 Bob Abbott has received two presidential awards from two different presidents. Here, he shows his most recent, given to him by President Joe Biden. (Pine Bluff Commercial/Suzi Parker)

Bob Abbott has received many accolades in his long life.

But he's pretty sure the last two he has received are the most prestigious, After all, how many people receive two awards in two years from two different presidents?

In 2020, Abbott received the President's Volunteer Service Award from then-President Donald Trump for his volunteer efforts for the American Association of Kidney Patients, an independent advocacy group founded in 1969. Abbott's efforts have helped kidney patients around the country -- and even the world -- for more than 50 years.

Then recently a lifetime achievement award signed by President Joe Biden showed up in Abbott's mailbox. He thinks it's for his ombudsman work involving nursing homes and visiting residents.

"They both have to do with volunteering," Abbott said. "I never dreamed I would receive two awards by two different presidents in two different years. It's unbelievable."

The puzzling part is that Abbott is not entirely sure what either award is really about and he has no idea who nominated him for either.

For several years, Abbott has been involved in the Arkansas Advocates for Nursing Home Residents to ensure that nursing homes are operated correctly, legislation is passed to benefit patients and that assistance for residents, who may be treated unfairly, receive proper care.

"It's sad the state of our nursing homes in our state, and these people need help," Abbott said.

Abbott's interest in nursing homes is not out of character for Abbott, who has spent his life helping others and living life on his own terms in Pine Bluff.

Abbott, who spent a career making everything from watches to odometers, wasn't one to think a death sentence medical diagnosis was the answer. He found a doctor in Little Rock, Dr. William J. Flanigan, who believed his father's life was worth saving. Flanigan was involved in one of the first kidney transplants in the 1960s.

From there, Abbott's involvement with kidney disease and making dialysis and treatment affordable accelerated with Abbott testifying in 1971 before the Joint Budget Committee of the Arkansas General Assembly.

In 1972, Abbott began working on the development of a program that would help defray those expenses on a national level, his involvement coming about because of his proximity to an Arkansan who, at that time, was considered to be one of the most powerful people in Washington, D.C. That was Congressman Wilbur Mills, the chairman of the House's Ways and Means Committee.

While Mills wasn't 100% behind Abbott's mission, he eventually came around to seeing Abbott's point of view.

The national legislation Abbott and Flanigan had a hand in helping to pass was an amendment to Social Security legislation that provided financial support for those with kidney disease.

Abbott continued his activism and helped to land the American Association of Kidney Patients national convention in Little Rock in 2011. That event was livestreamed throughout the world.

Still involved with kidney patients, Abbott also dedicates a large amount of his time as a certified nursing home ombudsman. He has volunteered hundreds of hours in nursing homes since 2011. He said that Arkansas nursing homes need better oversight and more attention paid to issues facing the elderly in nursing homes.

"It's an issue no one wants to pay attention to but something that certainly needs attention," Abbott said.