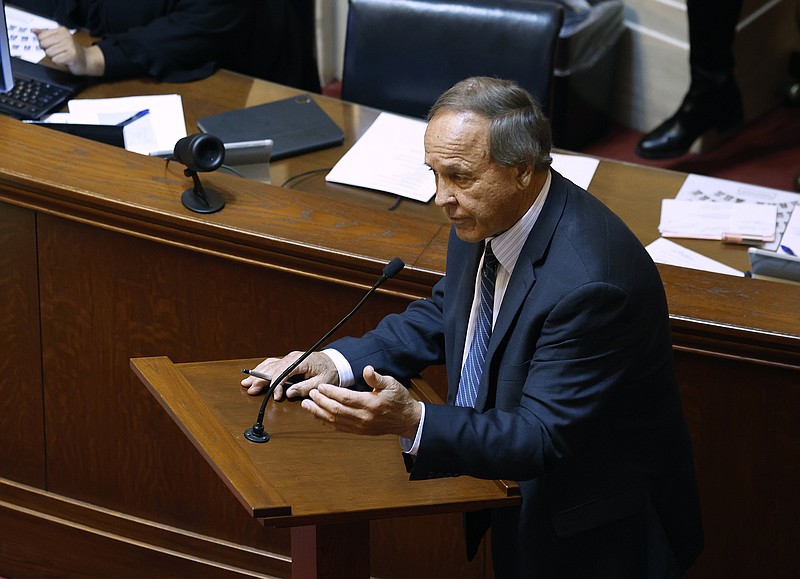 Sen. Gary Stubblefield, R-Branch, presents SB43, a bill that would classify drag performances as adult-oriented businesses, during the Senate session on Tuesday, Jan. 24, 2023, at the state Capitol in Little Rock. (Arkansas Democrat-Gazette/Thomas Metthe)

The Arkansas Senate on Tuesday handily approved a bill that would classify “drag performances” as an adult-oriented business, amid disagreements about whether the bill is designed to target particular groups of people.

In a 29-6 party-line vote, the Senate sent Senate Bill 43 by Sen. Gary Stubblefield, R-Branch, to the House for further action. Senate Republicans voted for the bill while Senate Democrats voted against the bill.

Critics of the bill contended that it could infringe on the rights of transgender people and bar certain theatrical performances. But Stubblefield said "to me this is about protecting children."

A “drag performance” as defined by Stubblefield’s bill requires at least one performer to exhibit a “gender identity that is different from the performer’s gender assigned at birth,” must be held before an audience of at least two people for entertainment, and must appeal to “the prurient interest.”

Stubblefield said the bill wouldn't stop a Shakespeare drama and suggestions that it would are "scare tactics."

Sen. Stephanie Flowers, D-Pine Bluff, said Stubblefield is trying to put a target on the back of people who he doesn't see as normal. But Stubblefield said, "I am not targeting anyone."

Opponents of the bill who spoke during a Senate committee meeting Thursday raised doubts over whether the term was as clearly defined as Stubblefield claimed it to be.

CORRECTION: Sen. Clarke Tucker's first name was misspelled in an earlier version of this article.