Man who fought gunman praised by Compiled by Democrat-Gazette Staff From Wire Reports | January 24, 2023 at 5:29 a.m. 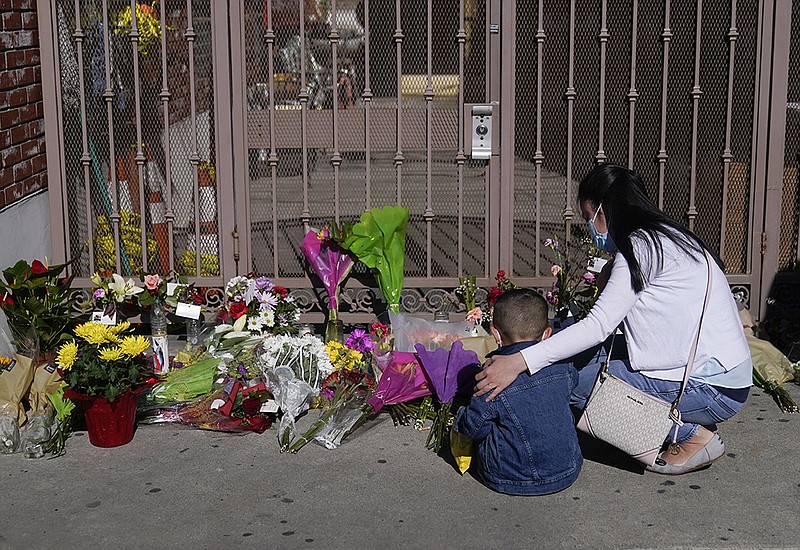 A woman comforts her son while visiting a makeshift memorial outside Star Dance Studio in Monterey Park, Calif., Monday, Jan. 23, 2023. Authorities searched for a motive for the gunman who killed 10 people at the ballroom dance club during Lunar New Year celebrations. (AP Photo/Jae C. Hong)

SAN MARINO, Calif. --About 20 minutes after a gunman killed 10 people and injured several others, the third-generation operator of a family-run dance hall in Alhambra, Calif., disarmed him Saturday, saving countless lives and averting another tragedy.

The search for the motive behind the shooting massacre at a Los Angeles-area ballroom dance hall led police to a mobile home community as they probed the past of the 72-year-old suspect Monday and his relationship to the club. Meanwhile, the death toll rose to 11 after health officials announced that one of the 10 people who were wounded had died.

Brandon Tsay, the third-generation operator of the family-run dance hall in Alhambra, was in the office off the lobby, watching the ballroom, when he heard the front doors swing closed and a strange clang that sounded like metallic objects hitting one another.

He turned around to see a semi-automatic pistol pointed at him.

"He was looking at me and looking around, not hiding that he was trying to do harm. His eyes were menacing," recalled Tsay, 26, at his family's San Marino home Sunday, less than 24 hours after he stared down a gunman who, unbeknown to him, had opened fire at another nearby ballroom, killing 10 people and injuring several others in one of California's worst mass shootings.

About 20 minutes after that massacre, the gunman, who authorities identified as Huu Can Tran, 72, arrived at Lai Lai, just about 2 miles to the north, officials said.

Tsay struggled with the gunman and eventually disarmed him. It was an act that officials roundly praised as heroic. Tran was found dead Sunday afternoon of a self-inflicted gunshot in a van about 30 miles away, according to law enforcement officials.

Tsay said the weapon the gunman was carrying signaled he intended to inflict maximum damage.

"How it was built and customized, I knew it wasn't for robbing money," Tsay said of the weapon. "From his body language, his facial expression, his eyes, he was looking for people."

Sheriff Robert Luna of Los Angeles County said in a news briefing Sunday afternoon that "two community members" had disarmed the gunman at the Alhambra ballroom. "This could have been much worse," he said.

But Tsay and his family, who reviewed the security camera footage from the lobby of the ballroom, said it was he alone who fought the gunman over control of the weapon and wrested it from him. The doors to the ballroom were closed and no one else was involved, they said.

"It was just my son. He could have died," said his father, Tom Tsay, who said he was proud of his son for the bravery he showed. "He's lucky, someone was watching over him."

His older sister, Brenda, who currently runs the business, said the video showed a prolonged, fierce struggle between the two men all over the lobby.

"He kept coming at him, he really wanted the gun back," she said of the gunman.

Brandon Tsay, a computer coder who mans the ticket office a few days a week at the ballroom started by his grandparents, said it was around 10:35 p.m. Saturday that he turned to face the gunman, whom he didn't recognize. He had never seen a real gun before, but could tell that it was a weapon, he said.

The next moment, he lunged and grabbed the weapon by its barrel and began wrestling with the gunman for control of it.

"Something came over me. I realized I needed to get the weapon away from him, I needed to take this weapon, disarm him or else everybody would have died," Tsay said. "When I got the courage, I lunged at him with both my hands, grabbed the weapon and we had a struggle."

They fought over control of the gun for about a minute and a half, and it felt like they were similarly matched in strength, Tsay said. At one point, the gunman looked down at the weapon and took one hand off it, as if to manipulate the gun to begin shooting. Tsay said he seized the moment and pried the pistol away from the man.

He pointed the weapon back at him and yelled: "Go, get the hell out of here," he recalled.

The assailant paused, but then headed back to his van, and Tsay called the police, the gun still in his hand.

Tsay, who stayed up all night assisting police with their investigation, said he felt traumatized and hadn't quite been able to process what he had been through. He particularly felt heartbroken for the community of Monterey Park and surrounding areas where his family and their ballroom had become established as a beloved haven over three decades, he said.

"Lai Lai," a name his grandmother chose, means "come, come," in Chinese, his sister said. The assailant, dressed in black, looked as if he could easily be one of their regulars, Tsay said.

"We have such a tight-knit community of dancers," he said. "It feels so terrible something like this happened, to have one of our individuals try to harm others."

THE SEARCH FOR WHY

Investigators searching for a motive Monday in the worst mass shooting in Los Angeles County history said the gunman was previously arrested for illegally owning a firearm, had a rifle at home and hundreds of rounds of ammunition, and appeared to be manufacturing firearm suppressors.

Luna said investigators had not yet established why Tran gunned down revelers during a Lunar New Year celebration at a Monterey Park dance hall he was said to frequent.

"What drove a mad man to do this? We don't know, but we intend to find out," Luna said.

Tran fired 42 rounds at the Star Ballroom Dance Studio on Saturday night, killing 11 people and wounding nine. He then drove to the nearby dance hall where Tsay wrestled the modified 9mm semi-automatic weapon away from him and saved "countless lives," Luna said.

"He's the hero that disarmed the suspect," Luna said. "What a brave man he is."

Officers who had surrounded a van matching descriptions of the getaway vehicle found Tran dead inside Sunday from a self-inflicted gunshot wound. A handgun was recovered from the van.

Sheriff's deputies from Los Angeles County searched Tran's home in a gated senior community in the town of Hemet, a little over an hour's drive from the site of the massacre, Hemet police spokesperson Alan Reyes told The Associated Press.

Luna said his officers found a .308-caliber rifle, an unknown number of ammunition and evidence he was making homemade firearm suppressors that muffle the sound of the weapons.

Tran had visited Hemet police twice this month to report he was the victim of fraud, theft and poisoning by family members a decade or two ago in the Los Angeles area, Reyes said. Tran said he would return to the station with documentation but never did.

The mayor of Monterey Park said Tran may have frequented the first dance hall that he targeted, and his ex-wife told CNN she had met him there and he offered her free lessons.

The death toll rose to 11 Monday after health officials announced that one of the 10 people wounded had died, the LA County Department of Health Services said.

All except one of the dead were 60 or older, according to information released Monday by the Los Angeles coroner's office providing the first identifications.

Nhan's family said in a statement that she was a loving person whose kindness was contagious, and was a regular at the Star Ballroom Dance Studio.

"It's what she loved to do. But unfairly, Saturday was her last dance," the family said. "We are starting the Lunar New Year broken. We never imagined her life would end so suddenly."

Authorities have shared little about Tran, who once owned a trucking company, according to California business records.

Tran's Trucking Inc. was based in Monterey Park and licensed with the state from September 2002 through August 2004.

Other than the previous arrest for unlawful possession of a firearm, which occurred in 1990, Tran had a limited criminal history, Luna said. The sheriff could not immediately say if the gun arrest at a time when laws were different would have barred him from owning weapons.

Los Angeles Superior Court records show Tran was married in 2001 and divorced five years later, citing irreconcilable difference. The couple did not have children and said they had no community property, and neither side had to pay alimony.

In the uncontested case, Tran noted in a filing that he could not get away from work to attend any court hearings, though he did not disclose where he worked or what he did.

His ex-wife told CNN that they married soon after they met at the dance hall. While she is named in court papers, she asked not to be identified because of the sensitivity of the case.

She said he would become upset if she missed a step dancing, but was never violent toward her.

Tran eventually moved from the San Gabriel Valley, a melting pot for Asian immigrants, and settled in Hemet, a lower-income community of many retirees 75 miles east of Los Angeles in Riverside County.

Tran lived in The Lakes at Hemet West, a gated community off a busy road with a view of snow-covered mountains. The development boasts of amenities including a 9-hole golf course, a shuffleboard court and a dance floor. Properties listed for sale ranged from $45,000 to $222,000.

A neighbor, Pat Roth, told KNBC-TV that Tran said he was a ballroom dance instructor in the past and would sometimes show up to dances at the senior community.

Hemet police had no records of any incidents involving Tran in the community or calls for service at his home, Reyes said.

The shootings during Lunar New Year celebrations sent a wave of fear through Asian American communities and cast a shadow over festivities nationwide.

The massacre was the nation's fifth mass killing this month, and it struck one of California's largest celebrations of a holiday observed in many Asian cultures, dealing another blow to a community that has been the target of high-profile violence in recent years.

It was also the deadliest attack since May 24, when 21 people were killed in an elementary school in Uvalde, Texas.

"We do understand that he may have had a history of visiting this dance hall and perhaps the motivation has to do with some personal relationships. But that's something that I think investigators are still uncovering and investigating," said Monterey Park Mayor Henry Lo. Public records show Tran once had addresses in the city and neighboring ones.

Tran is the second-oldest mass killer in the U.S. over the last nearly 20 years, according to a database compiled by The Associated Press, USA Today and Northeastern University. The only older mass killer was a 73-year-old who murdered five people in Yuma County, Arizona in 2011 before killing himself.