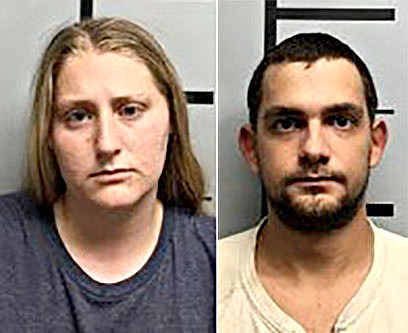 BENTONVILLE -- A Benton County circuit judge refused to lower the bond for a couple accused of causing their child's death while sleeping with him.

Judge Robin Green denied requests from the attorneys for Vincent Heyns and Emily Heyns. They are charged with manslaughter and endangering the welfare of a minor. They previously pleaded innocent to the charges.

The couple was arrested in connection with the death of their 2-month-old son and are both being held on $100,000 bond in the Benton County jail.

Ray Spruell, Emily Heyns' attorney, asked the judge to release his client from custody on her own recognizance. Spruell said autopsy results show the cause of the child's death was undetermined. Spruell said there were no drugs in the child's system.

Wilson Raines, deputy prosecutor, said the official autopsy report has not been received, but he expects it to return with the child's death listed as undetermined. Raines said he did not think the undetermined status should impact Emily Heyns' bond.

Spruell said there's nothing indicating his client was negligent.

Green said the couple was facing charges of being under the influence while sleeping with the baby.

They also had another baby die under similar circumstances, she noted.

Spruell said the couple's first child died of sudden infant death syndrome, and there was no claim of negligence against the couple.

Benton County sheriff's office deputies received a call about a nonresponsive child at 12671 Scenic Drive in Rogers about 2 p.m. Nov. 1, according to court documents.

During interviews, the couple said they had been smoking marijuana after authorities noticed marijuana paraphernalia in the house, according to the affidavit.

Vincent Heyns said the child was lying on his chest. He said he woke up and the baby "shimmied" down his chest and his face was pressed into the right side of his chest.

"I think I squished him," Vincent Heyns said, according to the affidavit.

Rose said when he went to bed, the couple was still awake and the baby was in the bedroom. He said he woke up at 2 p.m. and knocked on the bedroom door because he hadn't heard the baby, according to the affidavit.

He said they uncovered the child, and he was fine. Rose then left the room and a few minutes later, Emily Heyns came screaming for him saying, "Pa Pa, he's gone, we lost another one," according to the affidavit. Rose said he told Vincent Heyns to call 911, and he started CPR.

On July 13, 2021, deputies were called to the same address to investigate the death of a 4-month-old child. An investigation revealed the Heynses were both sleeping with the child, who was in Vincent Heyns' arms when he died, according to the affidavit.