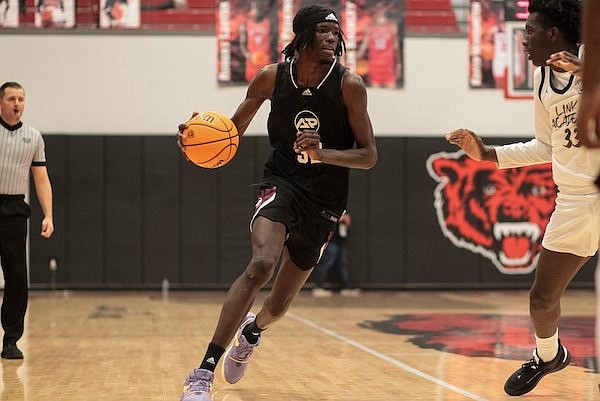 Baye Fall, an Arkansas basketball commit, dribbles during a game between Accelerated Press and Link Academy on Saturday, Nov. 19, 2022, at Northside High School in Fort Smith.

Arkansas’ men's and women’s basketball programs will have one signee each playing in this year’s McDonald’s All-American games.

Center Baye Fall, a signee for the Razorbacks men, and women's signee Taliah Scott, a guard, have been selected to play in the games on March 28 at Toyota Center in Houston.

Fall, 6-11 and 217 pounds, of Denver Accelerated Schools, averaged 18 points, 10 rebounds and 3 blocks while playing for the Colorado Hawks on the Adidas 3SSB circuit last year.

He is the fourth McDonald’s All-American for the Razorbacks' men in the past two years. Arkansas freshmen Nick Smith, Anthony Black and Jordan Walsh participated in last year’s contest.

Scott, 5-9, of Orange Park (Fla.) St. Johns Country Day School, is one of six McDonald’s All-Americans to sign with coach Mike Neighbors since his time in Fayetteville and ninth overall.

Fall and Scott were named to the Naismith Trophy 2022-23 Preseason Watchlist in November. Arkansas signee Layden Blocker was also named to the men's watch list.

Five male and female finalists will be announced in February and the winners will be awarded in March.