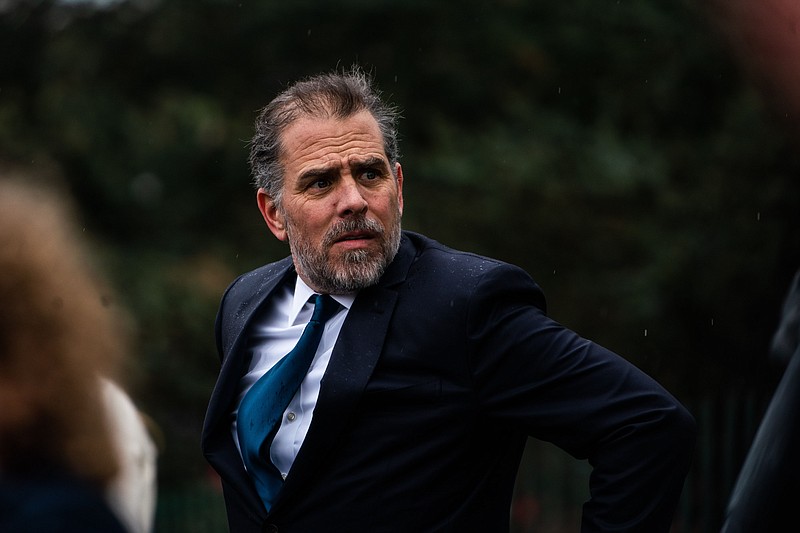 Hunter Biden, shown at the White House in April, has been under investigation since 2018. Attorney General Merrick Garland has promised there will be no political interference in the case involving the president's son. MUST CREDIT: Washington Post photo by Demetrius Freeman

Hunter Biden, son of President Joe Biden, called an attempt to change the last name of a baby he fathered to Biden "political warfare," in a Jan. 6 court filing.

Biden's filing, made in the 16th Circuit Court in Independence County regarding the paternity case against him, was a response to a request by Lunden Alexis Roberts, the child's mother, for the court to make the name change for the young girl.

The request, made in December, was made so that the 4-year-old girl could "benefit from carrying the Biden family name," and stated that the "Biden name is now synonymous with being well educated, successful, financially acute, and politically powerful."

The four-page rebuttal by Biden's camp demanded "strict proof thereof that such request is in the best interest of the child."

The filing adds that "it is apparent that [Roberts'] motivations to disregard the once desired protective orders that [she] herself requested and to which [Biden] agreed for the protection and best interest of the child, have now dissipated in the interest of political warfare against [Biden] and his family."

Biden asserts that Roberts "equivocates in her arguments" in the case, "on the same day by praising [Hunter Biden] and the Biden name to support the requested name change, and then disparaging [Biden] and his family in others."

This refers to Roberts' response to Biden's filing of a motion to have his child support payments adjusted due to "substantial material change" in his "financial circumstances, including but not limited to his income."

In Biden's latest filing, he says Roberts' "disparaging comments in various other motions and responses in this case are evident of scorn in the community for the Biden name. The child should have the opportunity for input at a time when the disparagement of the Biden name is not at its height."

It added, "The notoriety would no doubt rob this child of peaceful existence."

Roberts, originally from Batesville and an Arkansas State University graduate, met Hunter Biden while she was living in Washington and working for him, Roberts' attorney Grant Lancaster previously said.

The child, initially referred to in the case as "Baby Doe," was born in August 2018; the paternity suit followed in May 2019, days after Biden's marriage to a South African filmmaker, Melissa Cohen.

A DNA test showed, "with near scientific certainty," that Biden is Baby Doe's father, Judge Holly Meyer declared in a January 2020 order. That month the parties agreed on temporary child support until the issue was resolved.

In March 2020, Hunter Biden and Roberts reached an agreement to settle their paternity and child-support suit. His request to have his child support payments adjusted re-opened the case last year.

In his 2021 book "Beautiful Things," Biden claimed he fought Roberts' paternity suit because he had no memory of the incident that led to the pregnancy.

The book chronicles his struggles with alcohol and drug abuse, which intensified after the death of his brother, Beau, in May 2015 and after his divorce was finalized two years later.

"The other women I'd been with during rampages since my divorce were hardly the dating type. We would satisfy our immediate needs and little else," Hunter Biden wrote, adding, "I'm not proud of it."