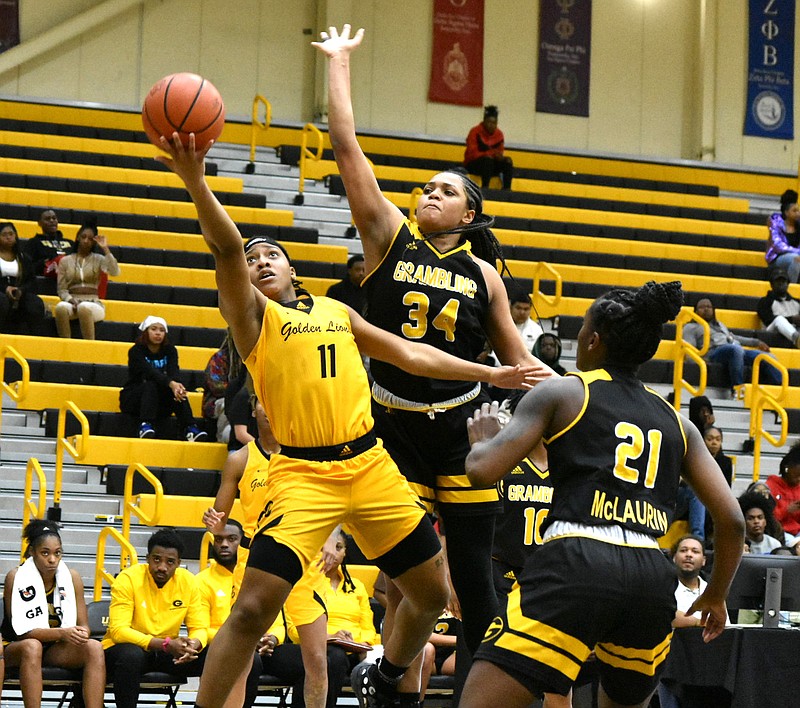 Tia Morgan of UAPB scoops in a layup in heavy traffic against Amanda Blake (34) and Jurnee McLaurin of Grambling State in the second quarter Monday at H.O. Clemmons Arena. (Pine Bluff Commercial/I.C. Murrell)

Despite running a smaller four-guard lineup, the University of Arkansas at Pine Bluff women's basketball team was able to score, defend and rebound in the backcourt.

Beck scored a game-high 17 points and pulled down 7 rebounds, while Morgan came off the bench to pour in 10 points. Demetria Shephard had 12 points and 4 rebounds, and Jelissa Reese controlled 9 rebounds to go with 4 points and 5 assists in the win.

UAPB outrebounded Grambling 48-36, with the starting backcourt -- Kourtney Rittenberry, Reese, Shepherd and Beck -- totaling 25 of them.

It's the first time the Lady Lions (6-12, 4-4 Southwestern Athletic Conference) forged a winning streak this season after some narrow defeats in conference play.

Beck, a junior transfer from the University of Memphis, rose to the occasion with her father, former University of Arkansas point guard Corey Beck, sitting courtside. Corey Beck was a defensive stalwart on the Razorbacks' 1994 NCAA championship team.

Morgan, a junior transfer from Tyler (Texas) Junior College, set a season-high 15 points last Monday against Bethune-Cookman University and picked up where she left off yesterday after being held to 2 points in a win over Southern University on Saturday.

"Me and Tia, I feel we just know each other's game," Beck said. "It comes natural to all of us. We know how to move the ball and how to get it to each other. We've got a bench, and that's what a lot of other teams don't have."

UAPB hung onto a 14-11 lead before a Beck basket started a 9-0 sprint. Morgan scored three well-contested baskets in close range to carry the Lady Lions' run.

That was after a first quarter where the Lady Lions committed 7 turnovers. They led 12-8 after the first 10 minutes, 29-21 at halftime and 49-40 through three frames.

"Once we got settled to get a good feel -- we talked about halftime I didn't feel like we were jelling -- although were up 8 or 9 at halftime, we still didn't look like the same team we were on Saturday," Lady Lions Coach Dawn Thornton said of her team building on their 70-53 win over Southern. "One thing about it, anybody can step up on any given night."

Starting center Maya Peat, who sat out much of the first half with two fouls, scored 8 of UAPB's points in a row, even as the Lady Tigers clawed to within 39-35 with 5:09 left in the period. Peat finished with 9 points.