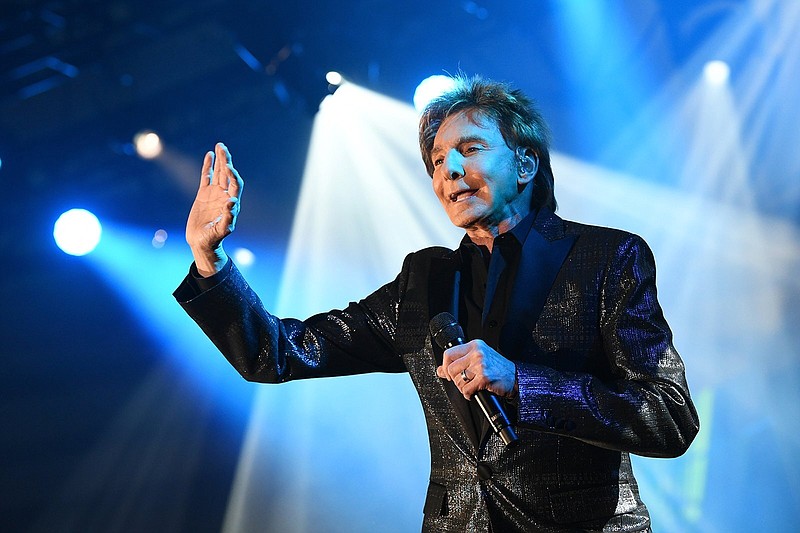 Barry Manilow performs in Phoenix in a 2019 file photo. Manilow will be 80 in June but doesn’t feel it or act like it. Just check his schedule. (Emma McIntyre/Getty Images for Celebrity Fight Night/TNS)

On one hand, a reminder of the fact that Barry Manilow is celebrating his 80th year on the planet this June will probably make longtime fans of the legendary crooner a.) shake their heads in disbelief, and/or b.) feel pretty old themselves.

On the other? Well, imagine how he feels about the impending milestone.

"I must say, this birthday is really crazy. It's crazy! I never intended to be this old. But I don't feel it!" Manilow says, laughing. The singer is on the phone from his home in Palm Springs, Calif., calling to promote his tour through the Southeast this month.

And, for what it's worth, those exclamation points — and the one below — aren't exaggerations on our part; he really is exclaiming.

"Retirement" almost seems like a dirty word to the man behind '70s pop standards like "Copacabana (At the Copa)" and "I Write the Songs" (who also this year will celebrate the 50th anniversary of his self-titled debut album).

On tap for this year alone: a new album of his own; his fingerprints on two more albums; the sold-out "Manilow: Hits 2023" arena mini-tour now underway; and 57 scheduled performances as part of his ongoing residency at the International Theater at Westgate Las Vegas.

Manilow talked about all of this and more — including his on-again, off-again relationship with the accordion as well as what's missing from pop radio these days — in a recent chat. The conversation has been lightly edited for clarity and brevity.

You spoke recently with a colleague about The Manilow Music Project Music Teacher Award (which, over the years, has given away more than $10 million to school music teachers and programs). Is there a music teacher that stands out to you as someone who — when you were young — helped point you in a direction that you might not have taken otherwise?

No. I did that on my own. I come from the slums of Brooklyn, N.Y. And the last thing anybody cared about in the slums in Brooklyn, N.Y., was music. My family always knew I was musical, and the only thing they could afford was an accordion and an accordion teacher. And in Brooklyn during those years, every Jewish and Italian kid had to play the accordion. It was like the law. You couldn't get out of Brooklyn if you didn't play "Lady of Spain." There was a guard at the Brooklyn Bridge.

So you heard a bevy of accordions all over town. And I was one of those kids that played the accordion, and I liked it. The best part of it is that I learned how to read music.

When my stepfather arrived, he threw out the accordion and got me a spinet piano. And I could actually play songs, 'cause I could read music. That was the big turning point. As soon as I hit the keys of that little spinet piano, even though I was 13 years old, I just knew that that was where I was gonna wind up. I didn't know how that could possibly happen — because where I came from, that was a big dream — but I just knew I was going to wind up doing something in music. I just didn't care about anything else.

Do you still have a soft spot for the accordion?

It's a very complicated instrument. If you look on YouTube and you type in "accordion players," you will see — these guys really are wizards at this instrument.

It's a much more complicated instrument than the piano, because of all those buttons on your left hand, and the keyboard on the right hand. And if you know how to play the accordion, you get some really nice sounds from it. So I don't make fun of it anymore. I used to make fun of it. But if you can play the accordion well, then you've got my admiration.

So, tell me a little bit about this tour. What was the thinking behind stepping away from your Vegas residency for this short run of shows?

Well, my band and my crew, we love each other. And we had the whole month of January off. I said, "Book us some dates, Gare [that being Garry Kief, Manilow's manager and husband]. Nobody wants to take off for a whole month." So he booked us on this tour.

We all love doing these shows. They're so uplifting. These audiences are still so great to me. They love these songs. I'm one of the lucky guys that can fill up a whole evening of pop songs that people know. I don't have to go into the album cuts. I don't have to go to songs that no one's ever heard of. Every song is something that — either you love it or you hate it, but you know it! It's a really enjoyable evening for these audiences.

Yeah, it is. It's even more exciting than the evenings in Vegas.

The evenings in Vegas — I've started to take it for granted, because they're so exciting. These audiences, you would really think that they'd be a little jaded, and would much rather go back out into the casino or something. But they've been great.

But when we do these tours, they are there to see me and hear this music. It's not like they happened to walk by the billboard where they see me in Vegas. Here, they saved their bucks and put away a Saturday night. So the whole vibe is different. They're there because they want to be there. Because they've been waiting for this show. And I'm very, very lucky and very grateful that they're still out there for me.

Tell me about your opening act, Gordie Brown (who is a musician and a singer but also a comedian and impressionist), and the idea of getting the audience warmed up by making it laugh.

Yeah, years ago he opened for us and he killed every night. He killed. I don't know how that could happen. It's one thing to have a music act to open for me, but to have a comic and impressionist — and for it to work — they loved him.

He's got billboards all over Vegas these days. He's headlining all over the place. So, I was so lucky to have him be available for these shows.

Would you say that the audiences at the shows that you're doing this month in the Southeast are going to basically kind of get a Vegas-style show?

No. I do my concert show when we go out. It's still beautiful. Beautiful lights and very, very beautiful effects and all — but no. And even in the Vegas show, I don't do a big production. With me, it's really just me, the audience, and a lot of great songs and my great band.

I think people walk away feeling really good after these shows. It's really a very emotional evening. And I've never really been into the big production.

On the age thing one more time: Do you feel at all like at some point you're gonna have to slow down?

I'm just gettin' started. I've always got "the next one." There's always "the next one" with me. I'm starting to produce an album for my friend (saxophonist) Dave Koz. I've never done anything like that. Then I've got the original cast album for my musical, "Harmony" (which is set to open on Broadway this year). We've finished doing that. "Harmony" is about to go up in New York, and when that opens up, that album will come out.

I never really think about this age thing. I don't feel it. Nothing seems to have changed. I look pretty much the same as I always do. I'm waiting for the other shoe to drop. But so far, so good.

And the album that you're doing on your own, is that something that'll come out this year?

Yeah. It's gonna either be this summer or for next Christmas. It's my first original pop album in a long time. Usually I either have a concept — like "15 Minutes," or "Paradise Cafe," or "Singin' With the Big Bands" — but in the beginning I used to just do pop songs. Albums of just pop songs that had nothing to do with each other.

I've never really been good at predicting hit singles. Even when I was having them, I was never very good at it. All I know is to make the best record I can make, and I listen back to it, and I say, "Well, that stinks," or, "I really loved it." So that's where I'm at with this.

It's 12 new pop songs with something in it that we are missing. And that something is a melody! Really, we seem to have lost the melody on the radio. I mean, they're still making great records. They're all full of rhythm and loops and stuff. But I miss the melodies. If you go to country stations, you have a chance of getting some nice-sounding melodies, but on pop radio, you gotta search for it.