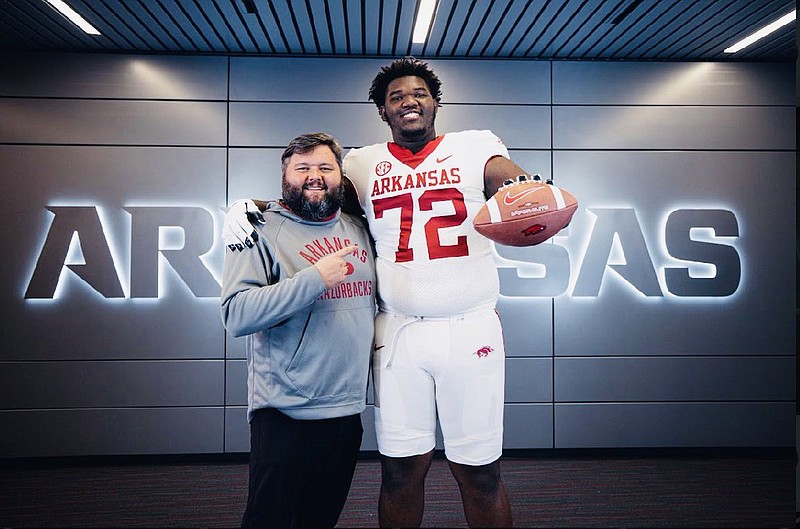 Massive junior 4-star offensive lineman Jac’Qawn McRoy has Arkansas at the top of his list after visiting the Razorbacks over the weekend.

“Easily No. 1 – easily,” McRoy said of where Arkansas stands with him. “I go to Auburn this weekend, so I guess they’re going to try and take that spot, because Auburn is sitting at No. 2.”

He explained why the Razorbacks are at the top of his list.

“It really feels like family, and out of any place I’ve been to Arkansas really has the biggest O-linemen as far as height and stuff,” McRoy said. “I’m like, they have to know how to coach them. I don’t want to go where coaches are like, ‘Dog, he’s big.’”

He said he visited Fayetteville last summer, for the Arkansas football game against Alabama in October and one other time prior to his latest trip.

McRoy hung out with Alabama natives and freshmen defensive backs TJ Metcalf and Dallas Young, and several of the offensive linemen.

“I talked to some of the O-linemen. I actually feel pretty average around them because they’re all 6-7,” he said.

“I know that’s funny, because I’m a lineman. The cafeteria is amazing,” he said of the food selection.

McCoy said he weighs 367 after eating so much over the weekend.

“Me and the scales have a long-distance relationship,” he said with a laugh.

He is looking to make other visits and eventually trim his list.

“I’ll take some more visits,” he said. “I’ll probably drop a top 10 or something right before my senior season or like a month before. Then (I will) commit right before the season starts.”