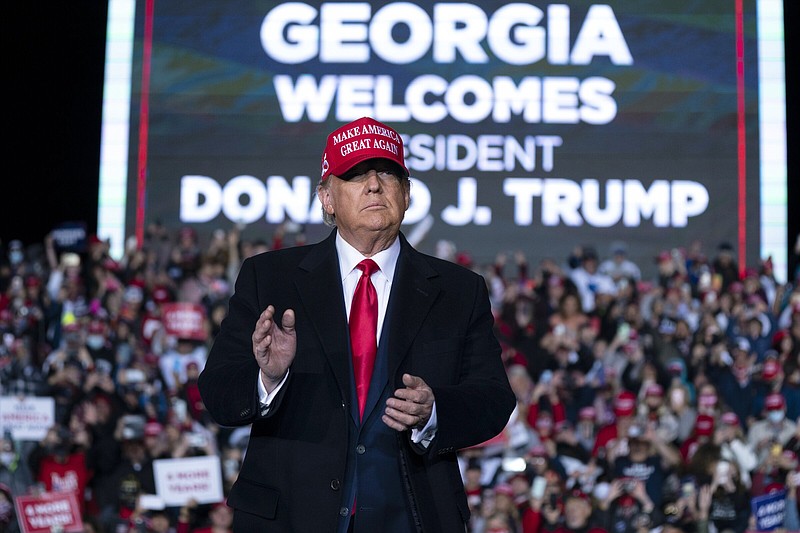 ATLANTA -- A coalition of media organizations filed a 109-page brief Monday urging a Georgia judge to unseal a 26-member grand jury's final report regarding evidence into whether former President Donald Trump and his allies broke the law during the 2020 election, calling it a "matter of profound public interest that goes to the heart of the nation's democratic forms of government."

While McBurney is not expected to immediately rule on the report's release, the hearing is likely to herald a new chapter in a criminal inquiry that could present fresh legal peril for Trump and his allies. The report's potential release comes against the backdrop of other investigations into alleged efforts by Trump and his supporters to subvert the 2020 election results in key battleground states.

Last month, the U.S. House committee investigating the Jan. 6, 2021, riot at the U.S. Capitol issued its final 800-plus-page report, which cited evidence from thousands of documents and more than 1,000 witness interviews. The committee was not conducting a criminal investigation, and its conclusions therefore have no legal bearing. Still, it argued that Trump, with the help of allies, orchestrated a plan to stay in office despite his election loss.

In recent weeks, a special counsel appointed by Attorney General Merrick Garland issued subpoenas to election officials in states including Georgia, as well as Trump campaign associates, as part of a Justice Department inquiry into the efforts Trump and his allies undertook to reverse his 2020 defeat.

In Fulton County, Fani Willis, a Democrat, will decide whether to criminally charge Trump or his allies. But her decision will be heavily influenced -- and perhaps given political cover -- by the findings of the Atlanta-area residents randomly selected in May to serve on the special grand jury.

The investigative body of 23 jurors and three alternates picked from a pool of residents from Atlanta and its suburbs was given full subpoena power for documents and the ability to call witnesses. The jurors' identities have not been made public -- and may never be.

From June to December, a litany of prominent Republicans appeared before the committee, including Georgia Gov. Brian Kemp, Sen. Lindsey Graham of South Carolina and former New York mayor Rudy Giuliani, along with dozens of other witnesses -- including some who have not previously given public testimony on what they knew about Trump's efforts to overturn the election.

"We are talking about citizens, not experts or bureaucrats," said Danny Porter, a former district attorney from Gwinnett County, north of Atlanta, and one of the few prosecutors in Georgia to have convened a special grand jury as part of an investigation. "Whatever they say, that adds a sense of credibility to it."

Willis, a longtime Fulton County prosecutor who was elected as district attorney in 2020, launched her investigation into alleged election interference days after a recording was made public of a January 2021 phone call Trump made to Georgia Secretary of State Brad Raffensperger urging him to "find" enough votes to overturn his defeat in Georgia. It was one of several calls Trump and his associates made to Georgia officials prodding them to undertake efforts that would change the results of the state's presidential election, which Trump lost by fewer than 12,000 votes.

In the two years since, Willis has indicated publicly and in court filings that her office's investigation has expanded to include several other lines of inquiry, including false claims of election fraud that Giuliani and other Trump associates made to Georgia state lawmakers; threats and harassment against Georgia election workers; and alleged efforts by unauthorized individuals to breach election data from voting machines in Coffee County, Ga.

In September, Willis told The Washington Post that her team had found credible allegations that crimes had been committed. "If indicted and convicted, people are facing prison sentences," Willis said.

At least 18 people have been notified that they are targets of the election interference investigation, according to court documents and statements from their attorneys. That list includes Giuliani, who was serving as Trump's lawyer at the time, and all the alternate Republican electors -- a group that includes David Shafer, chairman of the Georgia Republican Party.

On Monday, Trump's Georgia-based legal team, in a statement, implied that there had been no formal contact between the former president and his legal team and Fulton County prosecutors. "We have never been a part of this process," the attorneys said. But they did not immediately respond when asked if Trump had been given notice that he's a target of the investigation.

But today's hearing on the special grand jury report could offer some additional clarity as attorneys for potential targets are expected to appear in court to make arguments about whether the document should be released, even as they have not been privy to what it says.

Currently, the only people who have had access to the report are the jurors; McBurney, who oversaw the panel; members of the Fulton County bench who were given the option of reading the report before they voted to disband the grand jury; and Willis and her prosecution team.

The Jan. 24 hearing is scheduled exactly one year after the chief judge of the Fulton County Superior Court approved a request from Willis to seat a special grand jury -- a prosecutorial move that has been rarely used in Georgia.