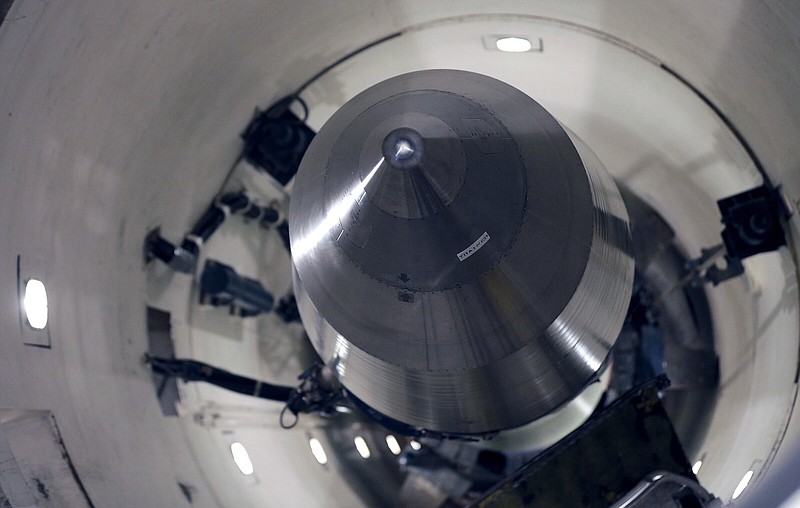 FILE - An inert Minuteman III missile is seen in a training launch tube at Minot Air Force Base, N.D., June 25, 2014. Nine military officers who had worked decades ago at a nuclear missile base in Montana, home to a vast field of 150 Minuteman III intercontinental ballistic missile silos, have been diagnosed with blood cancer and there are “indications” the disease may be linked to their service, according to military briefing slides obtained by The Associated Press. One of the officers has died. (AP Photo/Charlie Riedel, File)

WASHINGTON -- Nine military officers who had worked decades ago at a nuclear missile base in Montana have been diagnosed with blood cancer and there are "indications" that the disease may be linked to their service, according to military briefing slides obtained by The Associated Press. One of the officers has died.

All of the officers, known as missileers, were assigned as many as 25 years ago to Malmstrom Air Force Base, home to a vast field of 150 Minuteman III intercontinental ballistic missile silos. The nine officers were diagnosed with non-Hodgkin lymphoma, according to a January briefing by U.S. Space Force Lt. Col. Daniel Sebeck.

Missileers ride caged elevators deep underground into a small operations bunker encased in a thick wall of concrete and steel. They remain there sometimes for days, ready to turn the launch keys if ordered to by the president.

"There are indications of a possible association between cancer and missile combat crew service at Malmstrom AFB," Sebeck said in slides presented to his Space Force unit this month. The "disproportionate number of missileers presenting with cancer, specifically lymphoma" was concerning, he said.

Sebeck declined to comment when contacted by email by the AP on Saturday, saying the slides were "predecisional." In the slides, he said the issue was important to the Space Force because as many as 455 former missileers are now serving as Space Force officers, including at least four of the nine identified in the slides.

In a statement to the AP, Air Force spokeswoman Ann Stefanek said "senior leaders are aware of the concerns raised about the possible association of cancer related to missile combat crew members at Malmstrom AFB."

Stefanek added: "The information in this briefing has been shared with the Department of the Air Force surgeon general and our medical professionals are working to gather data and understand more."

Non-Hodgkin lymphoma, which according to the American Cancer Society affects an estimated 19 out of every 100,000 people in the U.S. annually, is a blood cancer that uses the body's infection-fighting lymph system to spread.

For comparison, only about 3,300 troops are based at Malmstrom at a time, and only about 400 of those are assigned either as missileers or as support for those operators. It is one of three bases in the U.S. that operate a total of 400 siloed Minutemen III ICBMs, including fields at Minot Air Force Base in North Dakota and F.E. Warren Air Force Base in Wyoming.

The median age for adult non-Hodgkin lymphoma is 67, according to the National Institutes of Health. The former missileers affected are far younger. Officers are often in their 20s when they are assigned duty watch; the officer who died, who was not identified, was a Space Force officer assigned to Schreiver Space Force Base in Colorado with the rank of major, a rank typically achieved in a service member's 30s. Two of the others are in the same Space Force unit with the rank of lieutenant colonel, which is typically reached in a service member's early 40s.

It's not the first time the military has been alerted to multiple cancer cases at Malmstrom. In 2001 the Air Force Institute for Operational Health investigated the base after 14 cancers of various types were reported among missileers who had served there, including two cases of non-Hodgkin lymphoma.

But the review found that the base was environmentally safe and that "sometimes illnesses tend to occur by chance alone." The report lamented that the list of those diagnosed had been collected because it "perpetuates the level of concern."

The discovery of new cases comes as the U.S. government has shown more openness to acknowledging the environmental hazards, or toxic exposures, troops may face while serving.

In her statement to the AP, Air Force spokeswoman Stefanek said, "We are heartbroken for all who have lost loved ones or are currently facing cancer of any kind."