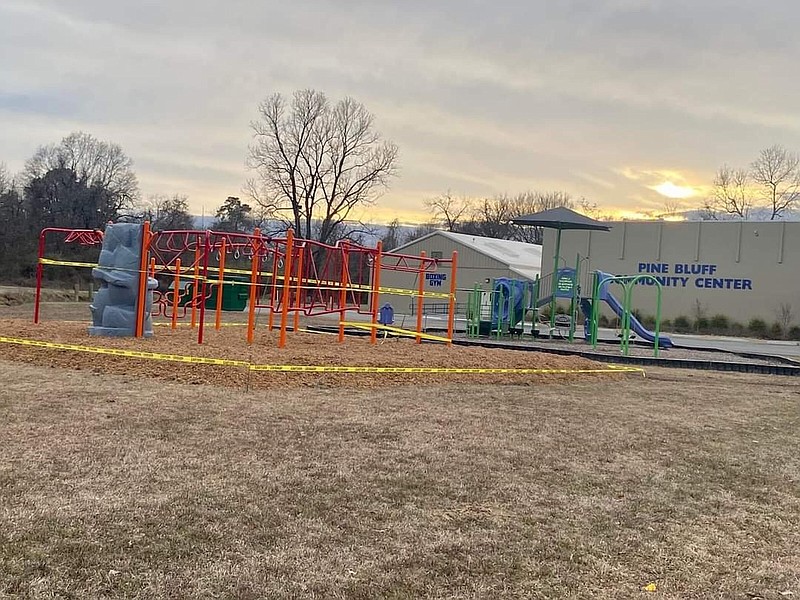 The Pine Bluff Community Center has new playground equipment. (Special to The Commercial)

The new year looks promising for Pine Bluff Parks and Recreation, according to director Samuel Glover, who credits the public/private partnership with Go Forward Pine Bluff, which has assisted with the overall goal.

During a drive through Townsend Park, one may notice a new pavilion under construction. Better known as the Townsend Park Family Pavilion, Glover said, it was the vision of Pine Bluff Mayor Shirley Washington, who wanted to have a family-sized pavilion for family reunions and large gatherings.

"Part of the parks master plan is to brand our parks," said Glover, who added that, originally, the hope was to bring the swimming pool back to the north side. After careful consideration, however, because of state recommendations and the liability associated with a pool, the pavilion was decided upon.

"It's a different time and we have the aquatics center now," said Glover. "We still listened to the people and tried to get a grant to put a pool out there, but the state didn't think it was a good idea."

"When Townsend Park baseball and Little League fields were done back in 2008, the fields were done but the fields didn't have lights on them," said Glover. "We were able to get that funding with help from Economic Community Development and we've been saving money towards that for the last three years because it's not cheap."

The public/private partnership, according to Glover, will also pay for three parking lots at Townsend Park, which currently only has one small lot. Engineering for the construction is underway.

A fence was also constructed around the fields to bring them up to AAA standards, qualifying the park for tournaments. Also in the works are new playground equipment, refurbishing of the basket courts and a T-ball field inside of Townsend Park, as well as batting cages and bullpens.

Glover said City Council Member Bruce Lockett has been instrumental in helping to find funding for the park additions.

"We are trying to rectify some things at that park," said Glover.

Safety is also a big concern and steps toward prevention have begun in several of the parks including speed humps and adequate lighting.

"We have lit up Regional Park," said Glover, who described Operation Safe Parks. "It was so dark in certain areas and we know darkness can bring a possible criminal element."

Working with Entergy Arkansas, Glover has managed to get several of the parks as bright as New York's Times Square.

"It looks like daytime at night," said Glover. "You also don't see a lot of street activity ."

Glover said the speed bumps have stopped a lot of the drag racing in the parks.

An extra layer of security was added to the RV park with a required key code for entry. Harbor Oaks now has entrance gates because, according to Glover, the parking lot was attractive for drag racing.

"We wanted to provide an extra layer of security for tourists," said Glover. "The drag racing and drifting is a nuisance that we have to curb in our city, and I believe we are taking a step in the right direction."

Projects for Regional Park that began last year are looking to wrap up soon.

Regional Park suffered major damage during the 2019 flood. The FEMA renovation project is nearing completion. Last year, work began on the inside of the baseball facility, concession stand and bathrooms.

The softball complex also began a total renovation. A complete electrical overhaul, costing approximately $400,000, was completed at Regional Park, with all electrical equipment replaced including the RV park.

"Everything that was damaged during the 2019 flood is being replaced and updated," said Glover.

With Go Forward Pine Bluff's assistance, new stadium-style seats have been installed at the baseball parks. With the upgrades, Glover said he was excited that adult and youth softball will return to the Delta in 2023 thanks to Parks and Recreation Athletic Director Vincent Tate.

"Vincent has been instrumental in building up and restoring the foundation," said Glover, who added that they will be able to bring quality tournaments and events to Pine Bluff. "As the mayor is trying to make Pine Bluff a destination city, we want to offer meaningful, impactful and relevant activities."

"Our job [is] to put that on display. We want every event to be high quality. We have a standard of excellence," Glover said. "Even with the 5A state tournament coming here, which was a huge group effort, it shows that Pine Bluff is a good place to come and have an event."

Glover said Pine Bluff winning the bid among cities like Fayetteville, Bentonville, Little Rock and El Dorado, to name a few, is a big deal.

"That's huge for us. The citizen needs to respond and come out and support this event," said Glover, who again credited the public/private partnership. "The partnership, collaborations and support, is vital for the future of the community."

The Pine Bluff Community Center saw heavy traffic in 2022 with more growth expected for 2023. With the partnership with Jefferson County Boys and Girls Club, Glover said, "so far, so good."

"The Boys and Girls contract is a 24-month trial run and though they lost a valuable leader, she will still be dedicated and assist in the transition," said Glover.

"While I'm saddened about the void my departure creates, I've loved the opportunity to learn and grow in the role of CEO over the last 8 1/2 years," she said.

As Aldridge makes a career change, she said she would continue to support the club as a volunteer.

Glover said the community center has become an activity hub featuring new playground equipment, jujitsu, boxing, dance class and much more. "We are seeing the dividends in the investment made," said Glover.

He said there have been some challenges when it comes to finding resources to support community involvement and activities, and he is inspired by the willingness and openness of more people willing to come together.

Glover is currently searching for funding for an all-inclusive playground that is ADA-compliant, making it accessible for children with certain disorders and disabilities.

"It's the public-private partnership that was put in place that assists in parks infrastructure," said Glover.

Glover said in order to succeed in the park's mission, everyone has to play their part and help elevate Pine Bluff by providing positive interactions and support. 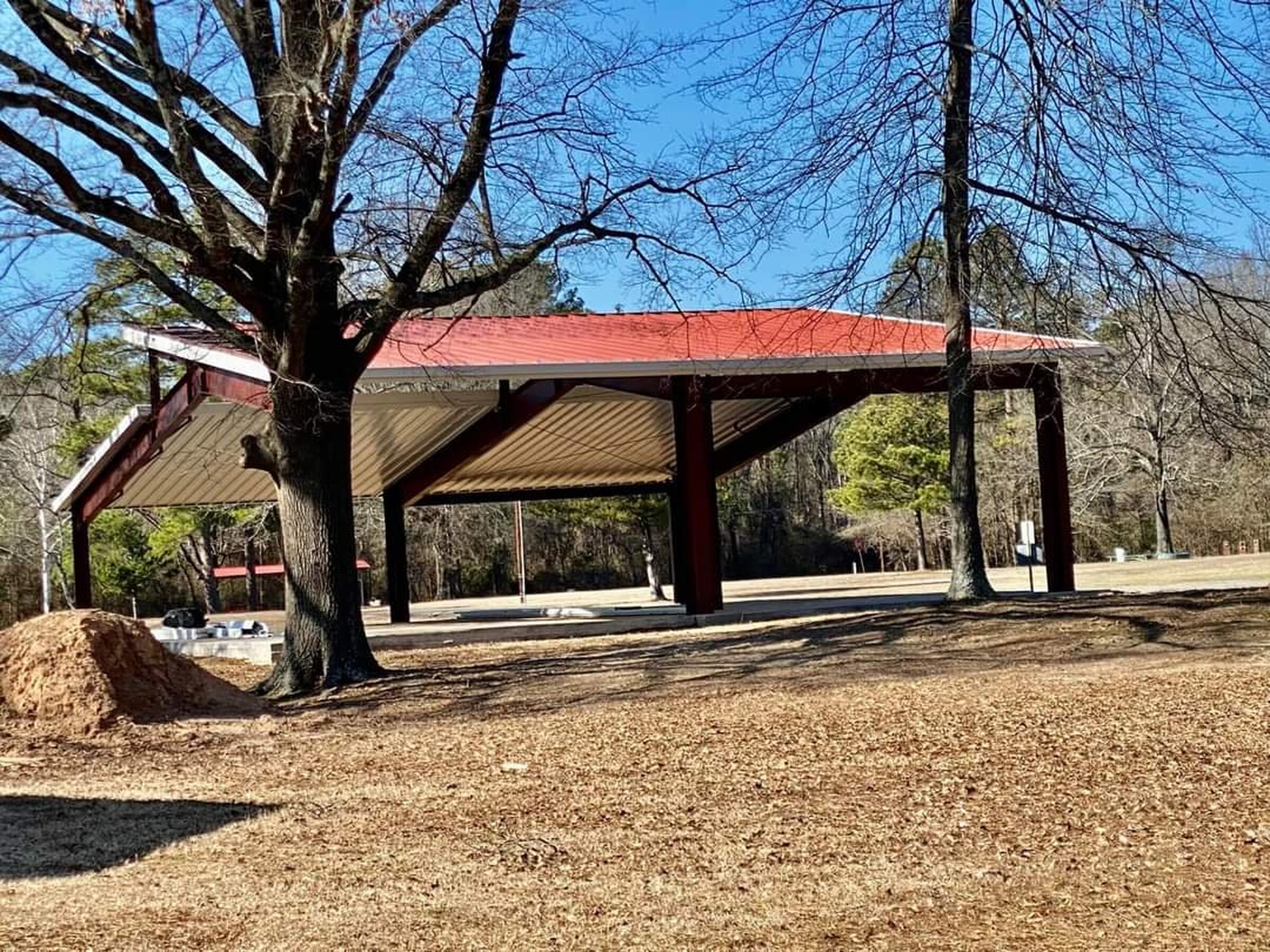 A new pavilion is being constructed at Townsend Park. (Special to The Commercial)