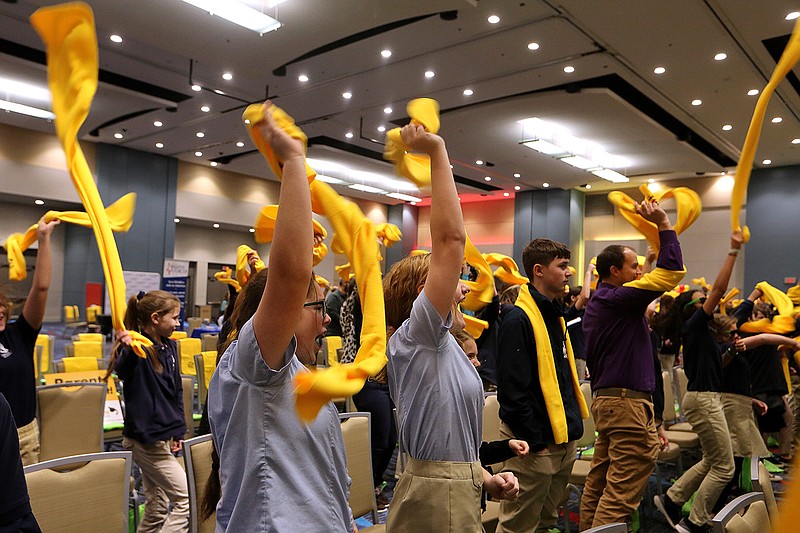 Attendees of the National School Choice Rally blow off steam waving their scarves in the air between speaks on Monday, Jan. 23, 2023, at the Statehouse Convention Center in Little Rock. (Arkansas Democrat-Gazette/Thomas Metthe)

Gov. Sarah Huckabee Sanders doubled down on her push for school choice but did not offer specifics during a rally Monday at the Statehouse Convention Center.

Sanders, who has made education the top issue of her administration, reiterated her message on education, emphasizing literacy, school choice, accountability for teachers and school safety. The rally was part of National School Choice Week, and Sanders was joined by school choice activist Corey DeAngelis and Republican State Rep. Keith Brooks of Little Rock.

"During the two years I spent on the campaign trail I spent a lot of time talking about education," Sanders said. "To me, there is no greater place to lean into and do a much bigger and better job for the students of Arkansas, and that starts with empowering our parents. Our parents are the cornerstone of a child's success and they must be a part of the conversation, not an afterthought."

Before she spoke, Sanders said she signed a proclamation declaring this week "Parental Choice Week" in Arkansas. Sanders said an education reform package will be made public in the coming weeks that will address issues ranging from school vouchers to increased teacher pay.

Since taking office two weeks ago, Sanders has repeatedly said education is the number one priority of her administration. Already she has signed three executive orders on school-related topics: banning "indoctrination," changing the process for grant applications and having the Department of Education conduct of a review standards and data.

Monday's rally was a part of National School Choice Week, meant to push voucher programs across the country. DeAngelis, a senior fellow at the Federation for Children, made the trip to Arkansas, citing it as the next battleground in the debate over school choice.

DeAngelis, who has a doctorate in education from the University of Arkansas, is one the nation's most well-known advocates of school choice, often appearing on conservative media shows to spread his message of "funding students, not systems."

"Arkansas is one of my top states that I'm focused on because it looks like there [are] great chances for true education freedom to be unleashed," he said.

At the rally Sanders emphasized her message on education, which follows the acronym LEARNS that she created during her campaign. It calls for improving literacy, empowering parents, accountability for teachers, readiness for students, expanding high-speed internet and increased school safety.

Sanders also spoke at a rally for school choice last week at the state Capitol, where she emphasized it will take priority in her administration but did not provide specifics of what would be included in a future bill.

Democrats said they plan to vote against any bill that includes a voucher program, even if it includes a provision for increasing teacher pay -- something teachers, school districts and lawmakers in both parties have called for doing. While many Republicans said they are in favor of school choice, many school administrators have pushed back against voucher programs, saying they will hurt students living in rural communities where there are few choices.

Despite expected pushback from some his colleagues in the GOP, Republican state Rep. David Ray, a proponent of school choice, said he believes the General Assembly will pass a school choice bill this session.

"There's always going to be some people who disagree philosophically, but I think by and large our caucus will be supportive of the plan to expand options for kids and parents," Ray said. "I do think it's different this time because there is executive leadership pushing for it, and Governor Sanders has put out a bold transformational vision that takes Arkansas to a better place than we currently are today."

Print Headline: Sanders doubles down on school choice in speech