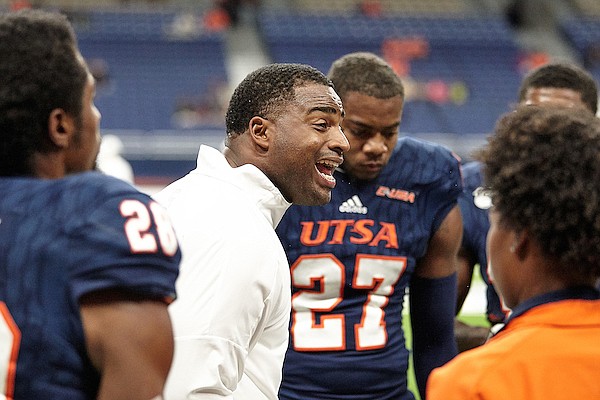 A native of New Orleans, Wilson, 32, spent last season as a defensive quality control assistant for cornerbacks at Florida. Details of Wilson’s deal with the Razorbacks were not available Tuesday.

Wilson, the younger cousin of LSU associate head coach and running backs coach Frank Wilson, is a former standout cornerback at Southern Miss, where he started the first 39 games of his career before an ankle injury derailed his senior season in 2013. He racked up 171 tackles and eight interceptions with the Golden Eagles, including four interception returns for touchdowns and was on the preseason Jim Thorpe Award watch list in 2013.

Wilson started in coaching as a graduate assistant on Frank Wilson’s staff at Texas-San Antonio in 2016 before taking on the full-time position of cornerbacks coach in 2018, which he held for two years. He moved on to McNeese State, where he served as defensive coordinator in 2020-21 before taking a spot on first-year Florida Coach Billy Napier’s staff last year.

The hiring of Wilson rounds out Pittman’s staff after he replaced five assistant coaches, including coordinators Barry Odom and Kendal Briles, this offseason. Wilson will replace Dominique Bowman, now at Temple, and will work with co-defensive coordinator Marcus Woodson in the Arkansas secondary.

Sowders was likely to have worked fairly closely with Wilson, particularly as he rehabbed his ankle injury in 2013.

Wilson worked on one of the nation’s top defensive staffs at UTSA in 2017, when the Roadrunners led Conference USA in seven statistical categories and was in the top 10 in the FBS in five categories.

During his sophomore season at Southern Miss in 2011, Wilson was part of a secondary that broke the NCAA record with eight interception returns for touchdowns and won the Conference USA championship.