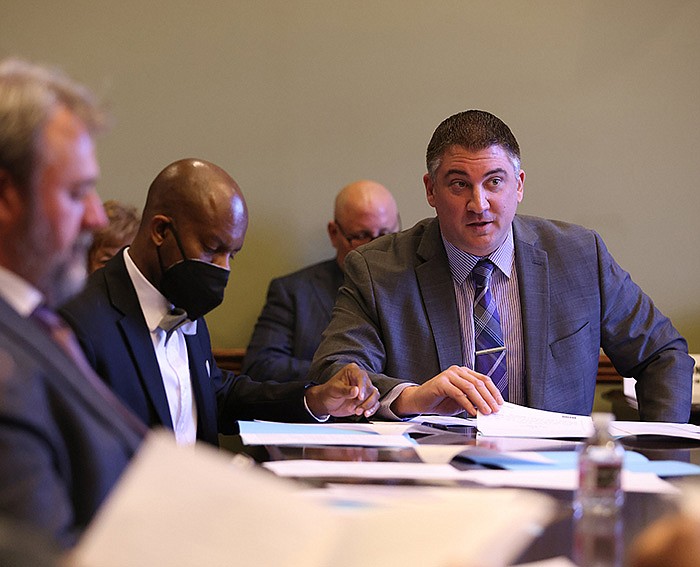 The rejected nominees include Hutchinson's nomination of his former chief of staff Alison Williams of North Little Rock to the Arkansas Educational Television Commission and the State Banking Board; Arkansas Public Employees Retirement System Executive Director Amy Fecher of Sherwood to the state Board of Nursing, along with eight other nursing board appointees; and former Department of Commerce spokeswoman Alisha Curtis of Little Rock to the state Board of Health, along with two other health board appointees.

It's possible for a senator to make a motion for the Senate to confirm any of the 36 appointees that the Senate Rules Committee rejected Monday.

The Senate committee recommended that the full Senate vote to confirm 14 of the former Republican governor's nominations of appointees to state boards and commissions.

The recommended nominees include William Ingram Phillips of Fairfield Bay and Melonaie Gullick of Conway to the Arkansas Veterans Commission, Arkansas State University System Vice President of University Relations Shane Broadway of Bryant to the War Memorial Stadium Commission, and Magnolia banker Bruce Maloch to the Arkansas Livestock and Poultry Commission. Both Broadway and Maloch are former Democratic state lawmakers.

Sen. Fred Love, D-Little Rock, questioned why the Senate Rules Committee was considering rejecting most of the nominees made by Hutchinson on the list presented to the committee Monday. He voiced his objection to doing so.

Senate Rules Committee Chairman Clint Penzo, R-Springdale, said the Senate received these appointment letters from Hutchinson at the last minute shortly before Republican Gov. Sarah Huckabee Sanders was sworn in Jan. 10 as governor, and the Senate lacks information about many of these appointees.

Sen. Jonathan Dismang, R-Searcy, said the Senate hasn't previously received appointment letters from a governor in his last hour in office and there are a large number of appointees the Senate doesn't have the ability to ask questions about to the former administration.

He said the Senate Rules Committee is recommending the Senate confirm Hutchinson's nominations of appointees that senators are familiar with.

Sen. Gary Stubblefield, R-Branch, said Sanders should have the right to choose who she wants to work with on state boards and commissions.

Afterward, a spokesman for Hutchinson, Bob Burgess, said in a written statement, "These appointments were made over several weeks to fill vacancies and, as is customary, they were grouped together into one announcement.

"As this was Governor Hutchinson's last round of appointments, the announcement was made at the end of his term in office, and I am not entirely sure how they were transmitted to the Senate," Burgess said.