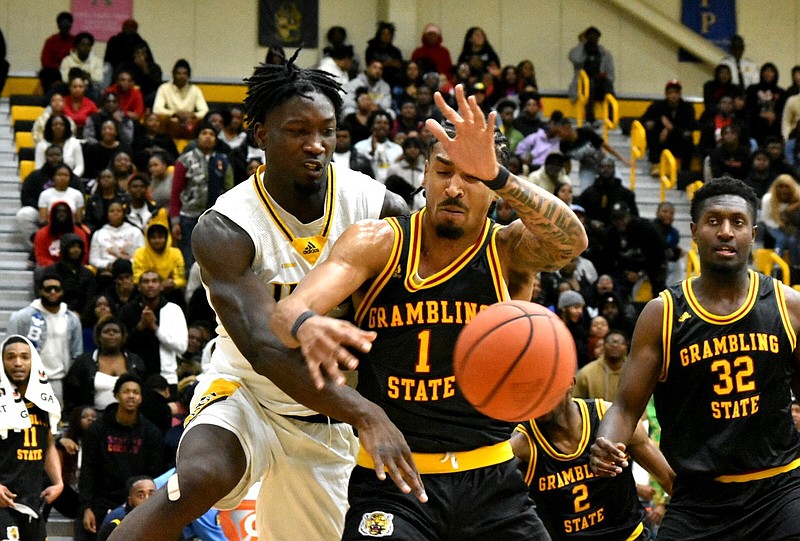 Ismael Plet of UAPB and Cameron Christon of Grambling State battle for a loose ball in the first half Monday at H.O. Clemmons Arena. (Pine Bluff Commercial/I.C. Murrell)

The University of Arkansas at Pine Bluff could never dig out of the early hole and saw a five-game winning streak in men's basketball come to an end Monday night as the Tigers won 77-70 at H.O. Clemmons Arena.

Shaun Doss Jr. scored a season-high 30 points and totaled 6 rebounds for the Golden Lions (9-12, 5-3), who never trailed despite their best efforts to answer every run by the fast break-happy Tigers (12-7, 5-2). Doss' previous high was 29 at Kent State University in November.

Jourdan Smith led Grambling with 24 points and 5 rebounds. Smith shot 8-for-11 from the floor and made 7 of 8 free throws.

Riding their longest winning streak since rattling off seven-straight in January 2018, the Lions didn't score for the first 4:15 of the game. It took a Kylen Milton 3-point play to get UAPB on the board.

Soon enough, it was 15-13 as Milton scored 11 within the first 10 minutes, but the Tigers were tough to tame from beyond the 3-point line. Reserve guard Quintin Murrell nailed back-to-back 3-point baskets to put the Tigers back ahead by 10 points, but Doss -- the SWAC's leading scorer at 16.4 points per game -- took over with his 9 first-half points and brought UAPB within 28-25, only for the the Tigers to lead 34-27 at halftime.

This was no ordinary Grambling basketball team the Lions hosted Monday. The Tigers had knocked off Power Five powers University of Colorado and Vanderbilt University, and they established themselves as the top defensive team in the SWAC at 64.1 points per game.