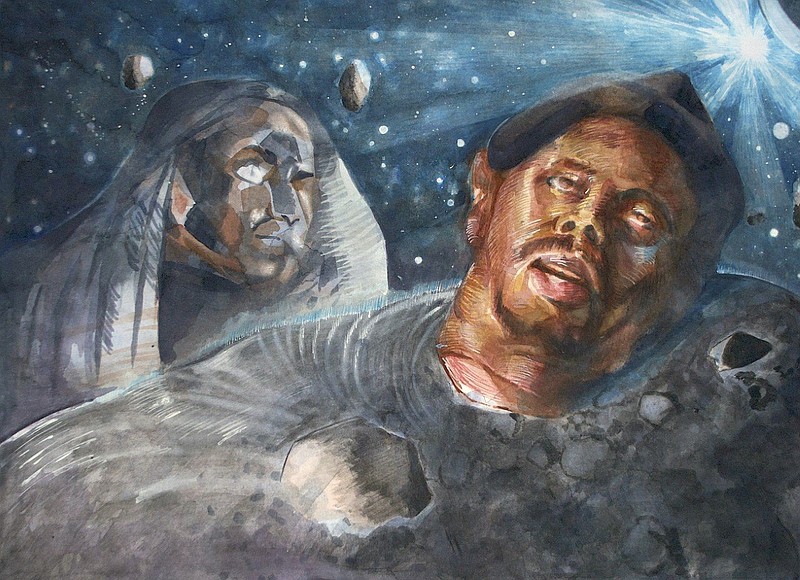 “Sick Seed” by Justin Bryant is part of “Earth.Seed,” an exhibition of Bryant’s frescoes at the University of Arkansas-Pulaski Technical College in North Little Rock. (Special to the Democrat-Gazette)

Bean has assembled 34 of his drawings in "Robert Bean: Figure Drawing On and Off Screen," a meticulously curated exploration of his figure drawing practice during the height of the pandemic, when artists, students and life models were forced to continue their work online instead of in person. The exhibit opened Jan. 17 at the Ann Maners and Alex Pappas Gallery in the Windgate Center of Art and Design at the University of Arkansas at Little Rock, where Bean is an adjunct instructor of figure drawing. A reception for him will be held at the Windgate Center's Taylor/Mourning Lobby from 5:30-7 p.m. Friday.

Eight of Bryant's lively frescoes, all with references to space and space travel, make up "Earth.Seed" at Windgate Gallery in the Center for Humanities and Arts at the University of Arkansas-Pulaski Technical College. In the collection Bryant, who teaches art at Pulaski Tech, takes cues from art history, pop culture, the Black radical tradition and novelist Octavia Butler to describe the Black experience. The college is hosting an opening reception from 6-8 p.m. Thursday. 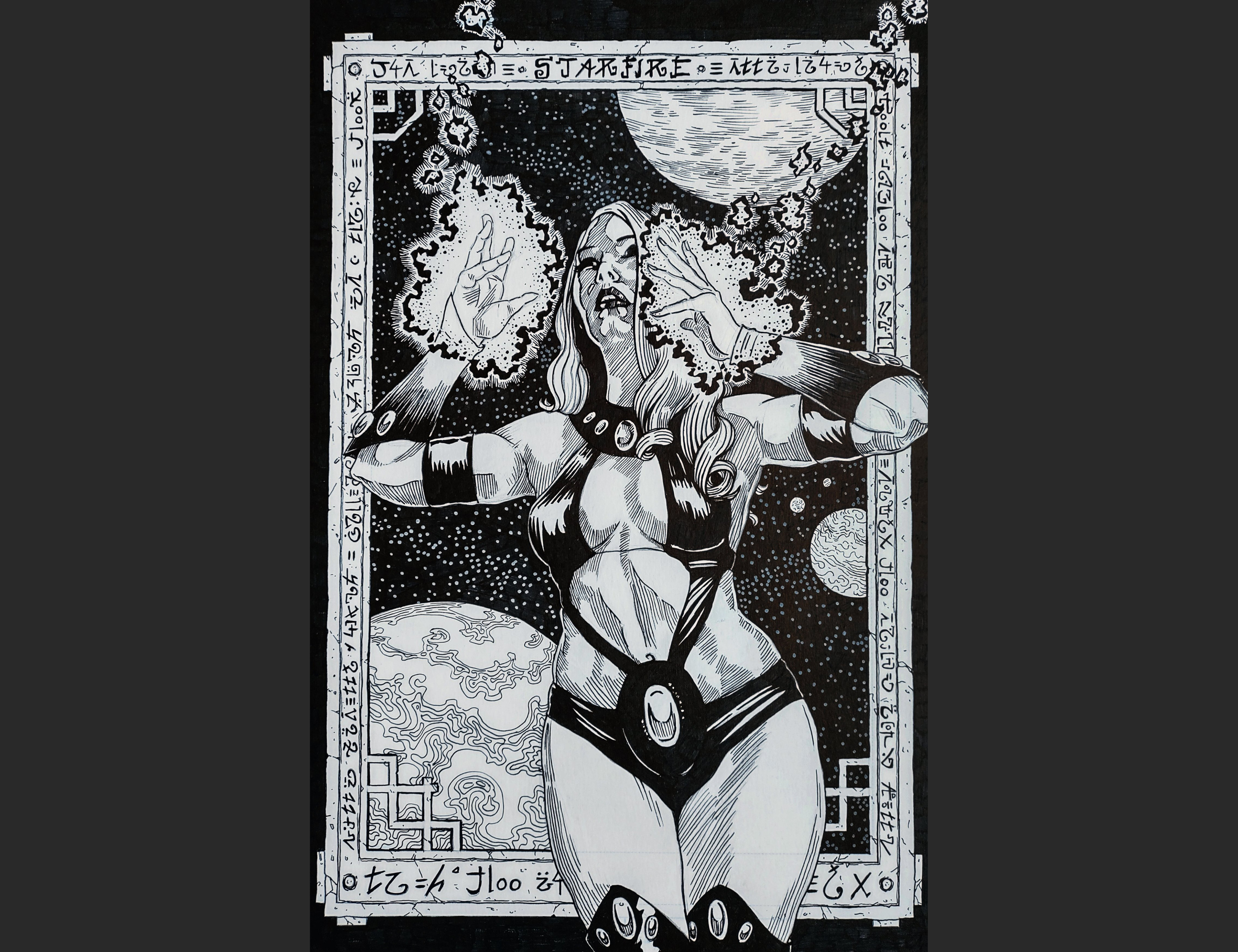 “Zoom Figure Drawing #144 – Ms. Margaret Jean as Starfire” by Robert Bean is included in “Robert Bean: Figure Drawing On and Off Screen” at the Ann Maners and Alex Pappas Gallery, Windgate Center of Art and Design, University of Arkansas at Little Rock. (Special to the Democrat-Gazette/Robert Bean)  Along with his teaching duties at UALR, Bean is also department chair of painting and drawing at the Windgate Art School of the Arkansas Museum of Fine Arts. A mainstay of his artwork and his art instruction is drawing from life models, the centuries-old practice used by artists and students that involves being in the same room with a model. When the pandemic hit in the spring of 2020, gatherings of models, artists and students in classrooms and studios were put on hold.

"It was really fun, and I was making all this work," the 48-year-old said in the gallery on a recent afternoon. "I culled this to 34 pieces from 122."

Bean, who can be found at @rbfineart, got into art as a kid trying to draw the characters he saw in comic books. As a teenager, he took figure drawing classes at the Arkansas Arts Center.

"When I got older, I realized that I had to actually learn how to draw people, and that's when I first started learning how to draw the figure." 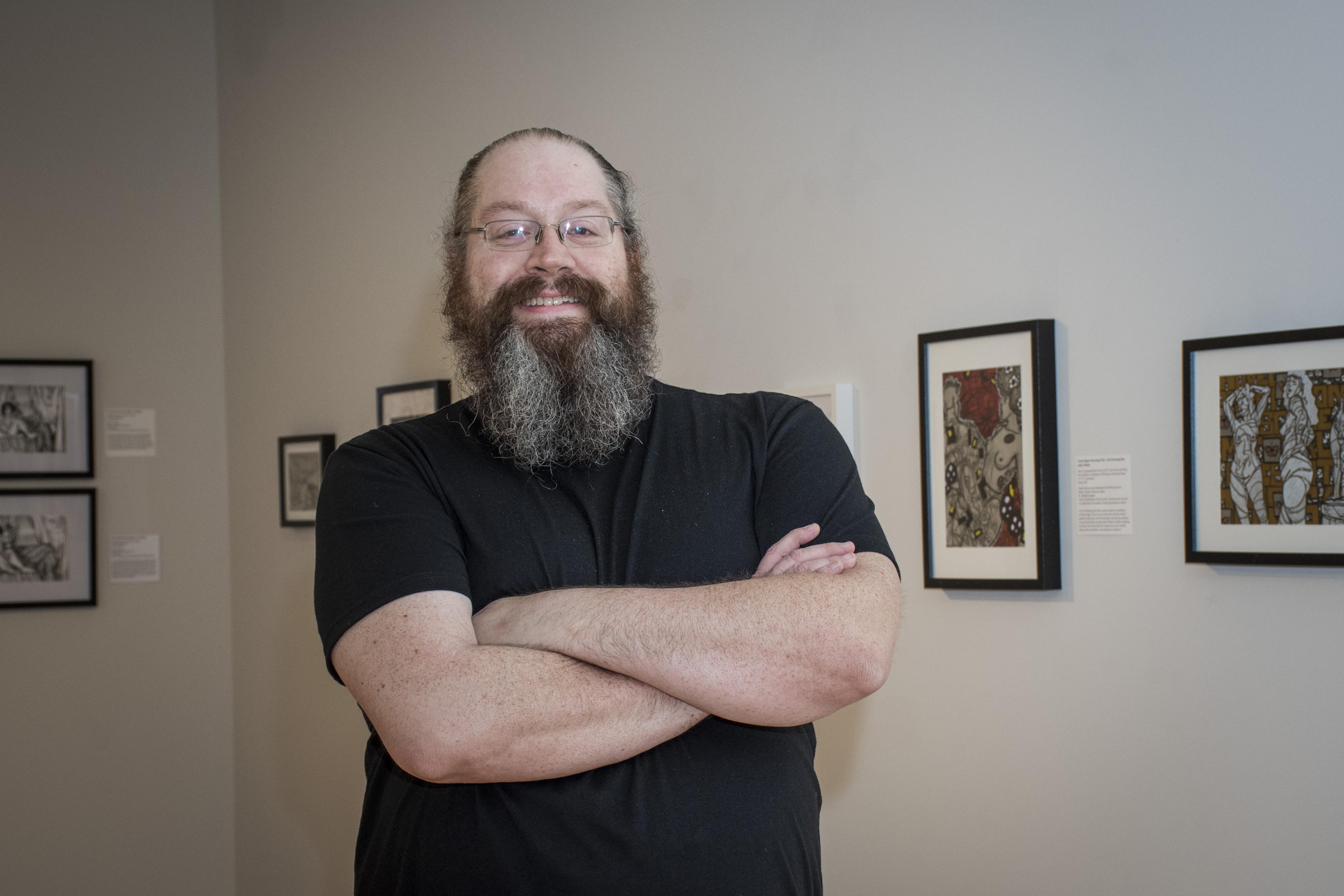 Robert Bean stands among his drawings that are part of “Robert Bean: Figure Drawing On and Off Screen,” a new exhibit at University of Arkansas at Little Rock. (Arkansas Democrat-Gazette/Cary Jenkins)  The comic book influence is evident in his figures, which all possess a sense of energy or drama (and often both). His mark-making and design choices are spot-on, and there is a surprising amount of diversity in the exhibit, which includes drawings made from pens, pencils, markers, charcoal and other tools and that vary in size from 22-by-30 inches to 6-by-8 inches. There are intricate pieces that he worked on for up to 12 hours ("#drawmeathome Day 15 — Ume" from a still photo) to quick but still fully resolved studies like "Zoom Figure Drawing #145 — Gina Stirling" that took 20 minutes.

At the risk of sounding all Captain Obvious, "Figure Drawing On and Off Screen" is best viewed from beginning to end. Enter the gallery and head straight for the large charcoal drawing on the wall in front of you (the moody "Drop-in Figure Drawing #7"), then continue to the right. Bean has laid out the exhibit as a journey that follows his drawings beginning in 2017 and proceeds to those he made from models online during the pandemic and ends with more recent works made in person.

Along the way, he provides plenty of details on each piece — things like the kind of pen he used, how long it took to finish, the name and location of the model and background information on what was going on during the sessions (some online models posed with their pets, others used unique camera angles or props). There are also larger, standalone panels where he writes more about how his drawings evolved while working online and the advantages and disadvantages of the process. Many of the pieces are of nude models, and Bean even notes that an apparent dearth of male models is the reason why almost all of the drawings feature women.

"Robert Bean: Figure Drawing On and Off Screen," is up through Feb. 28 and is well worth a visit for anyone interested in the figure and how one artist didn't let his enthusiasm for drawing it get derailed by the pandemic. 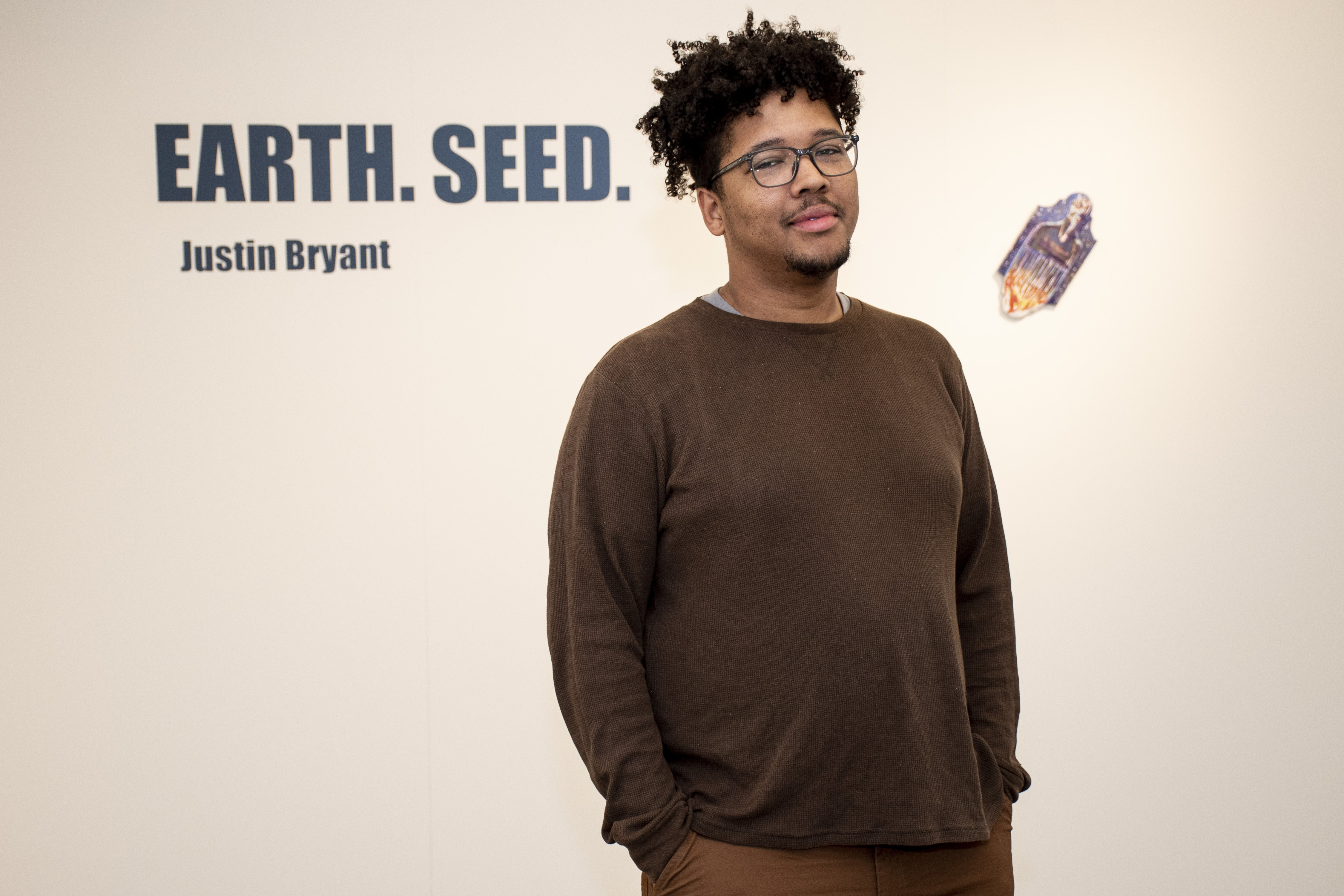 Justin Bryant is shown last week at the Windgate Gallery in the Center for Humanities and Arts at University of Arkansas-Pulaski Tech, where “Earth.Seed,” an exhibit of his fresco paintings, is on display. (Arkansas Democrat-Gazette/Cary Jenkins)  "I've always had a secret love for fresco painting," said the 35-year-old Bryant at the Windgate Gallery last week. He can trace it back to a trip he took in his late teens to Vatican City to see one of the most famous frescoes, Michelangelo's Sistine Chapel.

"I was about to cry. It was so beautiful," he says.

In 2017, Bryant, who grew up in Stuttgart and received a bachelor's degree in studio art from UALR and a master's in studio art from Louisiana State University, studied fresco-making during a residency in Skowhegan, Maine. He returned a few years later and his attraction to fresco was sealed.

To create most of the frescoes in "Earth.Seed," which will be up through March 17, Bryant started with a wood panel and built layers of plaster. He then applied pigment to the final layer, which was wet, to create a fresco painting. As the support dries, the pigment becomes a permanent part of the structure.

"This painting is not technically going to be done until next year," he says of a fresco that shows two children riding a scooter into outer space. "That's when it will fully set. The colors will get brighter and brighter."

Bryant is a fan of watercolor, and fresco can have a watercolor feel and also be sculptural, he says. That's evident in the pieces included in the exhibit. There's a thinness to the paint that goes well with the rough surfaces, especially in "Sick Seed," a haunting image of the head of a Black man floating over what looks like the surface of the moon. A bright star shines in the upper right hand corner and a faint image of another man looks on from the left.

The painting was inspired by "Study of Two Severed Heads," an 1818 work by Frenchman Jean-Louis Andre Theodore Gericault. Bryant turned to the Gil Scott Heron poem "Whitey on the Moon" for two smaller pieces, one with rusty and yellow colors and one in black and white, that feature the poem's title over the moon.

Another fresco shows Henry Box Brown, the enslaved man who in March 1849 mailed himself in a crate from his master's home in Richmond, Va., to Philadelphia. In Bryant's version, Brown is wearing an astronaut's helmet and is peering out of a container blasting through space.

"I'm interested in Blackness," Bryant says when talking about the show. "I follow and read a lot of things about different theories about Blackness. Often with these theories, they often refer to outer space or the cosmos. It's kind of like a metaphor for Blackness."

Octavia Butler's "Parable of the Sower" the post-apocalyptic 1993 novel that addressed climate change and social inequality, was also a touchstone for Bryant and his work in the exhibit, which takes its title from Earthseed, a religion in the book.

It's all heady and relevant stuff, but Bryant's work contains a sense of humor and wonder that goes well with the deeper topics he is digging into.

"This started off with really enjoying painting frescoes, and it's coming into more of a conceptual part of my work," he says. "We're still seeing where it's going to go."

“Robert Bean: Figure Drawing On and Off Screen”