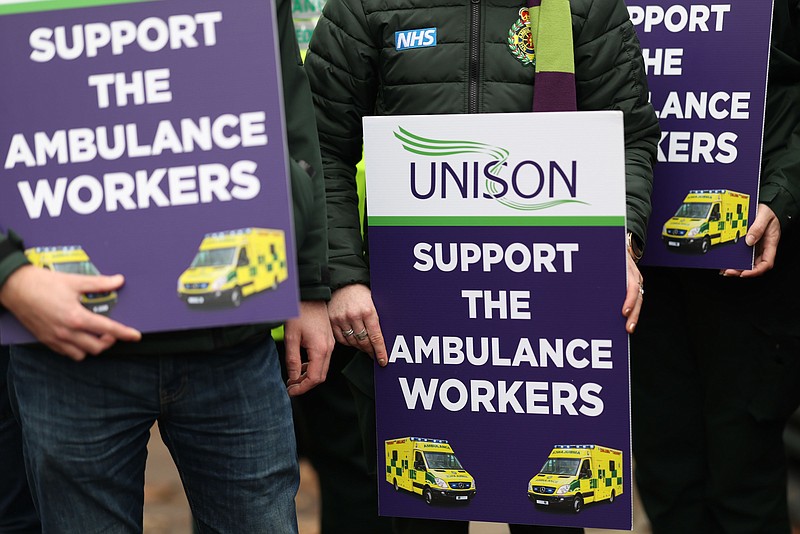 Ambulance service workers hold placards reading 'Support The Ambulance Workers' outside the London Ambulance Service headquarters during a strike in the Waterloo district of London, UK, on Wednesday, Dec. 21, 2022. Ambulance workers are demanding a higher pay rise to cope with the UK's cost of living crisis. MUST CREDIT: Bloomberg photo by Hollie Adams

Ambulance workers in the United Kingdom walked out Monday in the biggest show of industrial action yet by first responders since trade unions kicked off the historic series of protests against pay levels in Britain's National Health Service.

Workers from Unison, Unite and the GMB labor groups are striking again, with the public advised to call the 999 emergency number only if there's a life-threatening situation. It's the first time ambulance workers from all three unions have walked out on the same day. As many as 15,000 Unison ambulance workers planned to strike, along with 5,000 National Health Service colleagues in Liverpool, the union said.

"There's been literally no meeting about the substantive issue of pay," said Sharon Graham, general secretary of the Unite union. "They are dancing around their handbags."

Graham told BBC that workers were seeking a raise "around the ballpark of 10%."

Future strikes are expected to be extended to cover more of the country, said Helga Pile of Unison. Speaking from a picket line, Pile said regions in which ambulance workers failed to reach the 50% turnout threshold were being re-balloted.

"If it broadens out in that way, it'll create more disruption," she said, adding that she thought the Treasury was refusing to provide more money to lift salaries.

Health and Social Care Secretary Steve Barclay said in a statement Sunday it is "hugely disappointing some ambulance workers are continuing to take industrial action."

"I have had constructive talks with unions about this coming year's pay process for 2023-24, and am keen to continue talking about what is affordable and fair," Barclay said.

The government has been accused by the unions of "demonizing" emergency workers, with Rachel Harrison, National Secretary at the GMB Union, saying this was another reason for the escalation of action. Ministers have proposed a law imposing minimum service levels during strikes in essential areas such as health care.

However, Harrison said ambulance delays were actually lower on strike days. Still, Britons were advised to be cautious over the weekend and into Monday to avoid putting unnecessary pressure on the health system.

"It's really important that people stay warm and look after themselves, have their medications, and seek medical help if they need it without ignoring their symptoms," said John Martin, chief paramedic at the London Ambulance Service. The U.K. has experienced freezing temperatures in recent days.

Information for this report was contributed by Kitty Donaldson of Bloomberg News (WPNS).