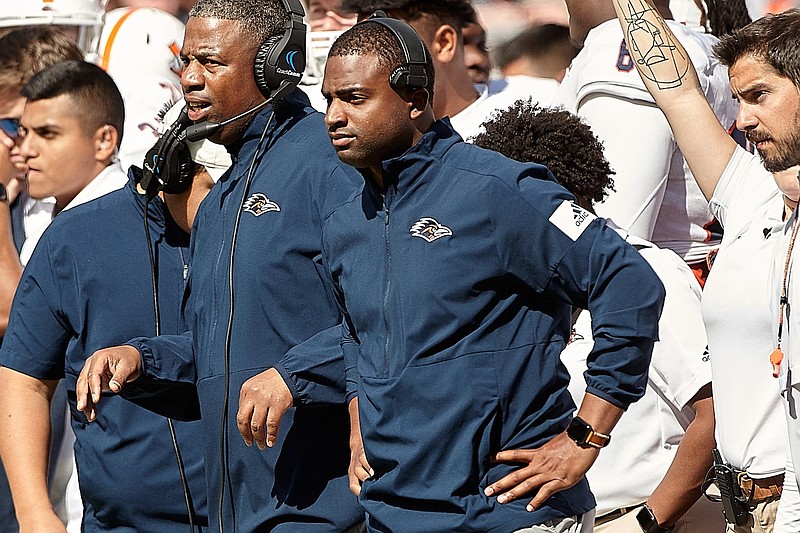 Deron Wilson (right) looks on from the sideline during a Texas-San Antonio football game against Texas A&M on Nov. 2, 2019, at Kyle Field in College Station, Texas. (Jeff Huehn/UTSA Athletics)

Emanuel Powell, head coach at Helen Cox High School in New Orleans, expected future success for Deron Wilson, Arkansas' new secondary coach, when he was a standout for him.

Wilson was a defensive quality control assistant for cornerbacks at Florida prior to being the defensive coordinator at McNeese State in 2020-21.

From 2016-19, he was at Texas-San Antonio, where he served as a defensive graduate assistant and cornerbacks coach the final two seasons under his cousin and Roadrunners coach Frank Wilson.

“He’s about kids. He’s about growth. He’s honorary,” Powell said. “Most of all, he’s a leader. He really works at his craft. He had all those traits when he was here with me.”

An ESPN 3-star prospect, Wilson was a three-time all-district and two-time all-area performer for Powell at O. Perry Walker High School before signing with Southern Miss in 2009. He had offers from Kansas State, Louisiana Tech and other schools.

Wilson was named to the C-USA All-Freshman Team, Phil Steele Freshman All-America team and second-team all-conference in 2010. He was on the Jim Thorpe Award Preseason Watch List before an ankle injury sidelined him as a senior in 2013.

Powell said Wilson being not too far removed from his playing days helps him relate to recruits.

“When you can relate, it works a lot better when you've been there and done those things and understand where the young guys are trying to get to, and he can kind of point them in the right direction in the things they need to know,” said Powell, who added Wilson has a willingness to provide tips to his players. “That helps out tremendously, because that builds trust and once you build trust it goes a long way.”

Powell sees a bright future ahead for Wilson at Arkansas and beyond.

“We’re proud of him down here and we just hope he continues the good work and I know he will, and at the end of the day big things are going to continue to happen for him,” Powell said. “I think he was ahead of his time.

“A real great leader on the field, off the field. They’re getting a good one.”